END_OF_DOCUMENT_TOKEN_TO_BE_REPLACED

"Stimulus" is now embedded in US economy...

FISCALLY SPEAKING, the US is now in much the same boat as Japan, writes Bill Bonner in his Daily Reckoning.

Since November, the Fed has injected about $4 billion a day into the economy through its QE2 program. And the federal government gives the economy almost another $5 billion worth of deficit spending a day. Together, this is $63 billion going into the economy each week.

In time of emergency – in a war, say – you would expect the feds to do extraordinary things for a short time. But now – with no war...and no national emergency...no recession...and no end in sight – the authorities are subsidizing the economy with a combined fiscal and monetary boost equal to more than $2 trillion a year. And that doesn't include the effect of zero interest rates.

Not surprisingly, these massive stimulus efforts require equally massive borrowing efforts. Talk about crowding out. The government has completely displaced the private sector from the credit markets. As the chart below shows, as of last year public sector borrowing had been more than 100% of total domestic credit for two consecutive years. 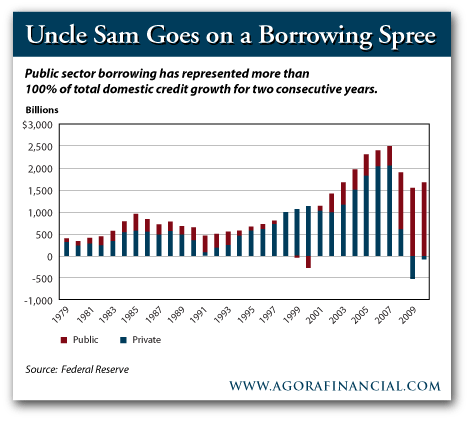 This presents a problem. To fund this public sector borrowing, Washington must either borrow someone else's savings, or borrow directly from the Federal Reserve by way of debt monetization. The Japanese are a "go-to buyer" of US Treasurys (and the second largest holder of US government paper after China).

But in view of the recent devastation, as well as the decline in savings and the rise in its own deficits, Japan is unlikely to continue to be a major source of financing for the US. Rebuilding the quake-damaged country will surely take priority.

Meanwhile, China is putting more emphasis on domestic consumption. This will mean allowing the yuan to strengthen versus the Dollar and less frantic buying of US government paper as a result. This suggests that China too will be less ready to help out a friend in need.

If we look at the US government's massive spending as an investment, the payoff is obviously and hugely negative. GDP growth – albeit largely phony – comes to only about $500 billion this year. That's a net loss to the economy of $1.5 trillion, more or less.

Of course, it's not an investment at all. It's a subsidy. And like all subsidies, the economy adapts. And then becomes dependent.

Last year, the Obama administration estimated the budget deficit for the current year at $900 billion. They were off by nearly 100%. The budget deficit is now estimated to be $1.7 trillion - and it could rise. Out of every Dollar spent by the US government, 43 cents, not 26 cents as Obama's team estimated, will be borrowed. How's that for budget control? And this is in a year when the economy is growing and, according to the official storyline, "recovering."

The stimulus efforts are clearly failing to stimulate economic growth, but they are succeeding very well at debasing the Dollar.

Our colleague in London, Dominic Frisby, makes an interesting point:

In other words, the Dow's great rally has been an illusion caused by a falling Dollar. And the Nikkei's slump an illusion caused by a rising Yen. Whether you are a US investor buying Japanese stocks or a Japanese investor buying American stocks, you get the same result. Currency movements are distorting what is really going on in the equity markets.

Or to put it another way, the buoyant US stock market is hiding the profound weakness of the US Dollar. This weakness has not spiraled into a crisis yet.

But suppose the dreaded double-dip recession comes? Suppose another earthquake, another revolution, or some other surprise, causes a resumption of the bear market on Wall Street? Suppose the budget deficit goes to $2 trillion – as forecast by former OMB director David Stockman?

Business, investors and households adjust to the extra money. No longer like WD40, intended to loosen the nuts and bolts of a cranky economy, the liquidity becomes more like diesel fuel. Then it is practically impossible to take it away. Shut off the supply of fuel and the machine stops.

The only sure way to keep the juice flowing is by means of the QE program. That is why Marc Faber expects QE2 to lead to QE3 and QE4...up to QE18.

We're not so sure it will go that far. The system, such as it is, might just blow up first.

Buy Gold today – and get access to live prices – with the world No.1 BullionVault...