END_OF_DOCUMENT_TOKEN_TO_BE_REPLACED

Until America's leaders get serious about the nation's broken finances, hard assets like gold will belong in your portfolio...

A DARK SHADOW hangs over the US Dollar and the ability (or, rather, inability) of the US federal government to pay its way in the future, writes Byron King in Bill Bonner's Daily Reckoning.

Below is a chart that shows the percentage of US government income that goes to pay interest on the national debt. It also shows the historical Gold Price. 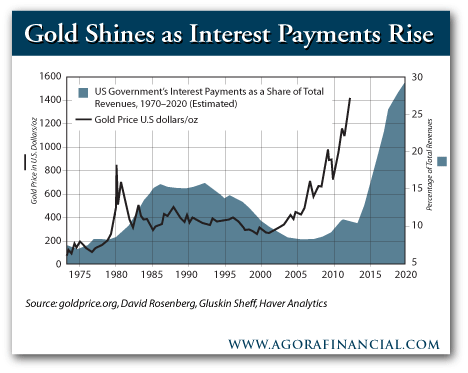 Before 2010, the chart uses historical data for both gold and the percentage of revenues going to pay interest. In the years ahead, the interest payments are an estimate based on known outstanding US debt and the anticipated rates. It's just following the math.

As you can see, in the immediate future, interest on the debt will eat up more and more of the overall federal revenue stream. That's because national debt and interest on that debt are growing far faster than taxable GDP.

We're staring at the potential for utter economic devastation.

From the standpoint of investing, the chart also gives us every reason to anticipate even higher prices for gold, and, by association, silver. So if you don't have some gold and silver, get some.

So if you follow the correlations on the chart, the forecast for the price of gold is simply up, up and away. That is, by 2020, we may be living in a country where the government is chronically insolvent, due to interest payments, and gold is going stratospheric.

We'll enter into an era when the government won't pay its day-to-day bills on time, if it pays them at all. Eventually, we may see the US currency in free fall, if not collapse. That's why your ONLY real long-term hope in all of this is to invest in "real" assets – things that will retain value over time. Energy and minerals come to mind, certainly to include physical gold and silver.

The mainstream media and old-line politicians pretty much ignore the looming debt crisis, or they talk around it. And compare this sense of economic non-urgency with how the media and bureaucrats deal with, say, the idea of "global warming" – a scientific possibility, but something subject to much debate.

It's as if protecting future generations from the possibility of a few extra fractions of a degree of atmospheric temperature – over the next century – is a high mission. Yet there's no need to wrestle with the absolute certainty that the country is immediately mortgaging its financial future. The US economy is loaded down with untold trillions of Dollars' worth of debt, and it's only getting worse.

Why is that? Why the neglect? Why isn't every church bell in the country ringing, sounding the alarm over the financial catastrophe that's happening before our eyes? Perhaps it's because addressing the idea of so-called "climate change" will increase the power and control of the political class. While dramatically cutting the federal budget and letting the private economy grow will reduce political power. Can't have that, right?

The road ahead looks a lot like the road behind. Unless and until America's leaders become serious about addressing our broken finances, traditional hard assets like gold and silver, as well as investments in non-traditional assets like the "rare earth" elements, will continue to look good.