END_OF_DOCUMENT_TOKEN_TO_BE_REPLACED

THERE are a few global ETFs with little room to drop before signalling daily chart technical breakdowns, writes Gary Tanashian in his Notes from the Rabbit Hole.

That does not mean the end of the larger up trends, but could signal oncoming intermediate corrections if they do fall further and close the week that way (pre-market is red).

The question would be, are they leading the fiscally drunk US market and its chronic tweeter in chief/stock pumper?

First, the Euro hedged European iShares. Like the Euro STOXX 50 index of stocks which it mimics, this ETF is in a bear flag. The biggest volume days have been red as this flag has ground upward. Not a short-term bullish look for Europe. 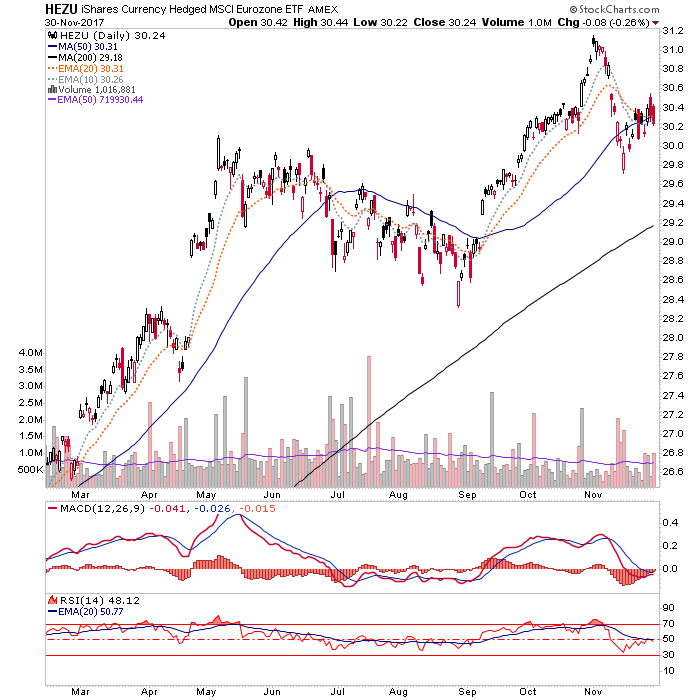 What it does have going for it is that the SMAs 50 & 200 are both sloping upward. Even a hit of the 200 is within the context of the up trend.

The China 50 ETF of Chinese stocks (ticker FXI) has also been an absolute robot in its orderly up trend. The pullbacks have been to the SMA 50 [the simple moving average of the last 50 days' prices] and now, close on the heels of the last one, a hard drop to the SMA 50 after a silly gap up is in play. 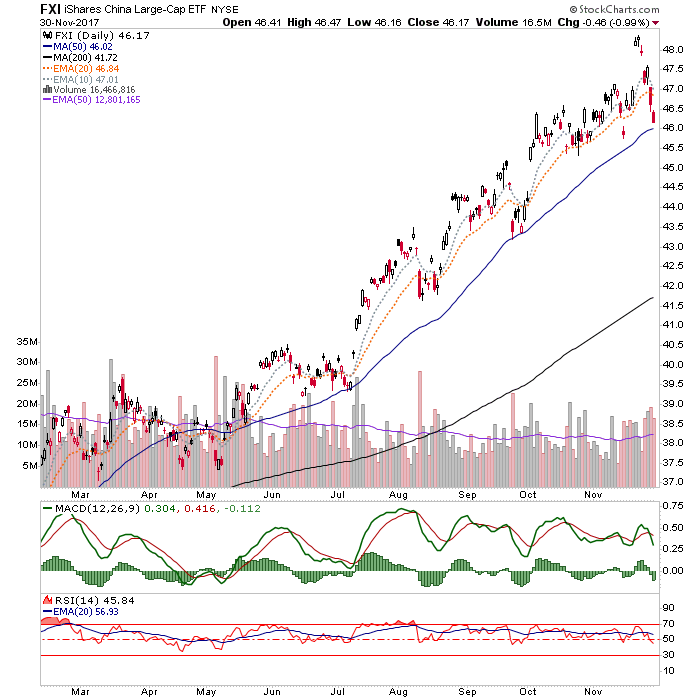 This is a suspect for no other reason than that gap up looks like a classic bull trap. Speaking of which, what about the US Dow & SPX last week, eh Bueller? Anyway, for the FXI it's a long way down to the firmly up trending SMA 200 if it were to lose the 45 area.

Emerging markets? See above, and below.

Sure, the US is drunk on tax cuts for the wealthy and corporations. That's market friendly...whee!

But it is unlikely that the richly valued US market would pull a flying pig routine in the face of a global pullback. So it may worthwhile to watch Europe and two recent global leaders, China (large caps) and EM for indications.

The slow moving big picture plan per yesterday's post would not be affected (other than the short-term state of it's 10yr/30yr yield view if risk goes off and bonds get bid) unless a pullback, if it comes, were to start breaking major markers, like the daily SMA 200 and lateral support levels (which we'd manage as needed). This post is not predicting a correction, but it's giving us one element to watch in support of a case for one.