END_OF_DOCUMENT_TOKEN_TO_BE_REPLACED

MARTHA and the Vandellas' "Nowhere to Run" was one of the hottest singles of 1965, says Frank Holmes at US Global Investors.

But the classic Motown hit may as well be the official soundtrack of investing in 2022.

Not only did the S&P 500 post its worst first-half of the year in over 50 years and fall further into bear territory, but nearly every other asset class – the glaring exception being fossil fuels – turned in a negative performance.

In the chart below are several indices of industries and sectors we closely track here at US Global Investors. Every single one of them ended the first half of 2022 in the red. 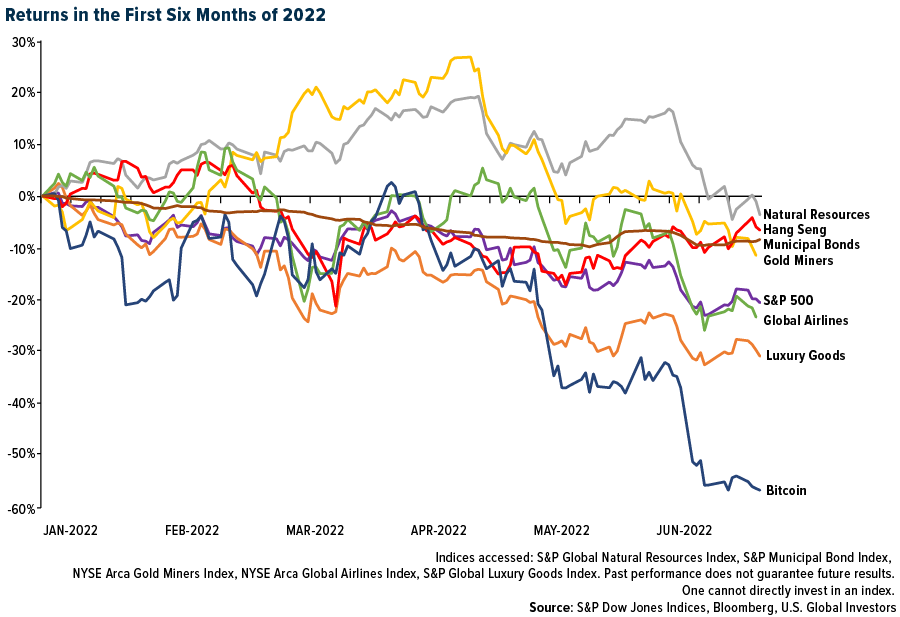 Bonds have historically shined when stocks have plunged, but Treasuries and municipals sold off in the first six months. Gold was essentially flat [Ed. in US Dollar terms. It rose 10% in Sterling and 8% in Euros], having shed a little over 1%; meanwhile, gold miners were among the biggest winners of the first quarter but subsequently traded sharply down into end-June as soaring fuel costs kneecapped revenues.

Some people have argued that Bitcoin could replace gold as a store of value, but the digital asset just finished its worst month on record. The crypto lost more than 38% of its value in June alone, and for all of 2022 so far, it's down about 57%.

If you're a contrarian, this may be an interesting buying opportunity. Bitcoin's 14-week relative strength index (RSI) is now in line with its most oversold levels on record, in early 2015 and late 2018. During both of these "crypto winters", critics of digital assets gleefully proclaimed the end to Bitcoin, and many are doing so today.

Past performance is no guarantee of future results. I'll just say that had you accumulated Bitcoin when the RSI was this low, you would have seen some incredible returns.

But how did we get here?

Current markets conditions were largely triggered by a perfect storm of rising interest rates, sky-high inflation, record fuel costs and the end of easy money. Put another way, Powell & Co. stomped on the brakes just as the economy appeared to be slowing down.

Copper is often called "Doctor Copper" since its price action has predicted economic upswings and downturns with a relatively high level of accuracy. This year the metal, which is found in nearly everything, has fallen the most below its 50-day moving average since 2011, when copper lost a third of its value.

You don't need to follow the copper market, of course, to know that conditions may be worsening. According to a just-released Gallup poll, Americans' view of the economy in June fell to its lowest level since the financial crisis.

The US economy may already be in recession, which occurs when gross domestic product (GDP) contracts for two consecutive quarters. Real GDP fell at an annual rate of 1.6% in the first quarter, and the Atlanta Fed is now projecting a second-quarter contraction of 2.1%.

On top of everything else, this is a midterm election year for a first-term president (whose approval rating, I should point out, is slipping). Historically, this has resulted in an extra shot of market volatility as the mudslinging between the two parties intensifies. Since 1946, the second year of a new Democratic president has ended in an S&P 500 loss of 2.3% on average, according to Jeff Hirsch, editor-in-chief of The Stock Trader's Almanac.

Investors are now left wondering where they can hide for the remainder of 2022. As I said in an earlier post, gold has been one of the very few bright spots this year. It's managed to stay essentially flat even as the value of the US Dollar has surged, which is more than we can say about nearly everything else. I expect it to perform just as well, if not better, in the second half.

No doubt about it, this has been a very challenging market environment to navigate, and we look to be in for more of the same. The Fed will continue to tighten monetary policy, and the longer the conflict in Ukraine persists, the longer we'll likely feel the pressure from elevated gas prices. A "war tax," if you will.

Everything is extremely oversold, and investors may be tempted to start speculating. No one can say what will happen next, but keep in mind that we may not have found the bottom. I would be extra cautious before making any big bets.