END_OF_DOCUMENT_TOKEN_TO_BE_REPLACED

Things can only get hotter. Until they can't...
MARKET ANALYSIS rarely makes mainstream TV here in the UK, writes Adrian Ash at BullionVault.
Instead, we're normally just told that the FTSE rose by 58...the Pound lost 2/10ths...the US and Japanese cheeks closed a gap of 2.4 points...
...that kind of thing, shorn of context or purpose.
Yet the US yield curve just hit breakfast telly.
Good Morning Britain, no less.
"There's a thing going on in America at the moment called 'ten-two'," said personal finance guru Martin Lewis, announcing this financial indicator like it was the Space Hopper craze or the Floss.
What the Money Saving Expert meant, and what he went on to explain, is that longer-term US interest rates...
...as shown by the yield offered to buyers of 10-year Treasury bonds...
...just dipped below the rate on shorter-term debt, as shown by the yield offered by 2-year T-bonds.
Net result?
Looming recession! Recession! RECESSION! of course. 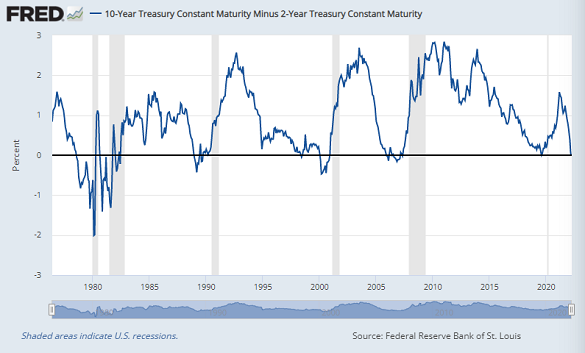 "In the short-term interest rates are likely to go up but get cut back down again," says Lewis.
"That actually is a prediction that potentially there might be a worldwide recession again."
So far, so fair.
In normal times, the annual cost of borrowing for 10 years is higher than the annual cost of borrowing for 2.
5-year rates are also normally higher than 2-year rates, and 30-year rates are higher than 10. Because the longer you ask a lender to tie up their money, the more risk you ask them to take...
...maybe from inflation or non-payment or the missed opportunity of investing in something more exciting than fixed-income bonds.
In market jargon, this is known as a "positive" yield curve. So when the rate charged on a longer-term loan suddenly sits below a short-term rate, the curve has gone negative or "inverted".
Cue the financial media to explode with "Recession Coming!" headlines. 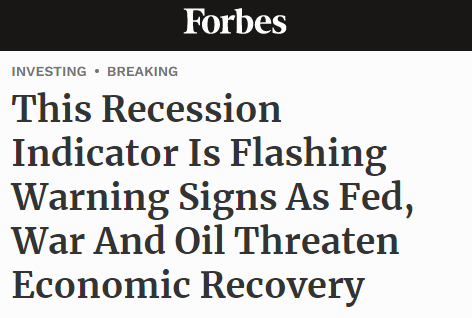 The bond market's 10-year rate dipped below the 2-year for a couple of days at the start of this month. And as our chart of the 10-year minus the 2-year yields shows above...
...with US economic downturns marked by the vertical grey bars...
...such events have preceded each of the last 6 recessions in the US. Which makes sense.
The bond market says borrowing costs, compared to where they are now or will be in the short term, are set to drop in the longer term.
And that, as a research paper from US central bank the Federal Reserve explains, happens because "when investors fear an economic slowdown or especially a downturn within the next year or so, they likewise tend to expect the Fed to begin lowering its target policy rate in the not-too-distant future."
So when might this recession take hold?
Sometime between 6 months and 2 years from now, if the yield-curve inversion's past signals hold good.
Hardly a tradable signal, in other words.
What's more, the 10-2 spread has also given 'false signals' ahead of what didn't turn out to be a US economic contraction.
It has signalled 10 of the last 6 recessions in fact. 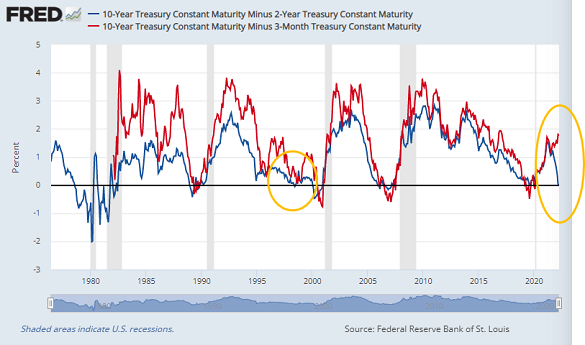 That doesn't mean yield curve inversions offer no foresight.
Take the 10-year minus the 3-month rate, for instance. It's marked in red above. And circled in yellow, as you can see, it contradicted the 10-2 signal of 1998...
...before confirming the 10-2's next warning of early 2000 by also going negative ahead of the 2001 recession.
Today again, the 10-3 spread has been denying the latest 10-2 signal. Ten-year yields are rising very steeply (in red) above current 3-month rates.
So, nothing to worry about. Panic over. Maybe.
"Ultimately, we argue there is no need to fear the 2-10 spread, or any other spread measure for that matter," says that research paper from US Fed economists Eric Engstrom and Steven Sharpe.
Pretty much the entire financial media now agrees too...
...flipping from forecasting the end-of-the-world to asking which fool forecast the end of the world in a matter of days, as per the usual cycle of Shout-Doubt-Ridicule-Forget.
"At best," Engstrom & Sharpe continue, "the predictive power of term spreads is a case of 'reverse causality'. That is, term spreads predict recessions because they impound pessimistic, often accurately pessimistic, expectations that market participants have already formed about the economy, and thus about an expected cessation in monetary policy tightening."
"Nevertheless, it can only make things worse if investors not only fear the prospect of a recession, but at the same time, are spooked by that fear itself, which is mirrored in inverted term spreads."
Fear of fear itself, you say? Cue Wall Street analysts.
"Economists surveyed by the Wall Street Journal on average put the probability of the economy being in recession sometime in the next 12 months at 28%, up from 18% in January and just 13% a year ago," says the WSJ.
Yet while Engstrom and Sharpe dismiss the yield curve...any yield curve in fact...as offering any useful foresight on recession, they still propose a yield curve worth watching in their research.
Their "near-term forward spread" tracks the gap between market rates 18 months forward from today and the current 3-month rate.
It didn't give any 'false' signals in 1998. Like the 10-3 spread in red on our chart above, it is now pointing sharply higher, not negative. 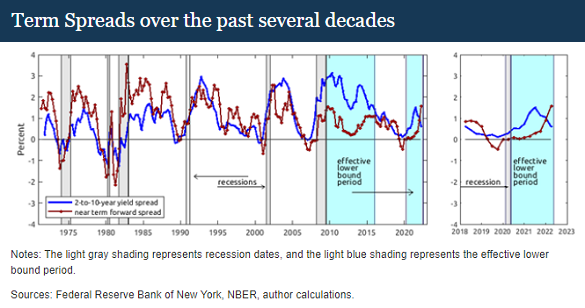 Once more then, recession panic over.
The yield curves that matter don't signal a recession any time soon, and the 10-2 might well be giving a false signal anyway...
...thanks to the US Fed breaking any useful market-information in the spread by squatting on both overnight interest rates and also on a huge pile of longer-term bonds, boosting their price and so squashing their yield as noted by the LBMA 'Hot Topics' webinar I joined last Thursday.
If you haven't watched it yet, do take 30 minutes to learn about Russian gold, NSFR and the more considered outlook for the US economy here.
Bottom line meantime?
Over the last half-century or more, there has never been a US recession which wasn't preceded by an inversion of that "near-term forward spread".
Then again, over the last half-century, there has never been a time when the US jobs market wasn't stronger than today. New claims for jobless benefits are the lowest since 1969.
Nor have corporate US profit margins ever been higher since the immediate post-WW2 boom.
Nor, in terms of those earnings, has the US stock market ever been more expensive over the last half century, not outside of the Dot Com Bubble.
Nor have US house prices ever risen faster, leaping by 20% in 12 months. That tops even the peak of the Subprime Bubble which crashed and burned as the global financial crisis took hold (and not by coincidence according to most histories of that catastrophe in money).
Nor have US consumers ever rushed to borrow more money more quickly than they have in early 2022, "reflecting outsized increases in both credit-card balances and non-revolving loans" as Bloomberg notes of the record jump in household credit.
Add the steepest pace of consumer and producer price increases since the early 1980s and – long story short – things have rarely run so hot in the USA, the world's largest national economy.
That doesn't mean things cannot run hotter.
But with the Federal Reserve finally admitting it must raise interest rates sharply – while also cutting the size of its monster QE bond holdings – to try and cool that monstrous inflation, odds are that things can't run much hotter for long.