END_OF_DOCUMENT_TOKEN_TO_BE_REPLACED

Some $6 trillion of Yen "carry trades" is trying to rush home, creating an avalanche on world stock markets...

THE JAPANESE YEN has been the star performer on the currency markets over the past few weeks, writes Gary Dorsch of Global Money Trends, even with Japan's economy sliding deep into a recession.

Amid slumping exports, the Nikkei-225 equity index is also plunging, now far below the psychological 10,000-level for the first time in five years.

Yet the Japanese Yen has been the only currency to climb against the US Dollar since August 1st, even while the greenback has moved sharply higher against the Euro and all other major foreign currencies.

Traditionally, bubbles emerge in hotbeds of speculation, such as the commodity or stock markets. Some glaring examples this year were the spectacular rise and fall of the Shanghai stock market and the wild gyrations of crude oil and soybeans. But the Yen's latest rally represents the bursting of another bubble, this time in the currency markets.

Japan sits at the epicenter of "bubble-mania" in foreign exchange, because its yield starved domestic investors plowed $6 trillion of their savings into overseas assets.

Japanese investors increased their exposure to foreign assets by ¥59 trillion ($566 billion) in 2007 alone, setting a record top of ¥610 trillion ($5.9 trillion) and making Japan the world's largest creditor nation for the 17th straight year.

In addition, global speculators borrowed $1.2 trillion worth of low-cost Japanese Yen (Tokyo interest rates haven't got above 1.0% per year since the start of this decade), in order to buy higher yielding currencies, commodities, and stocks held abroad. 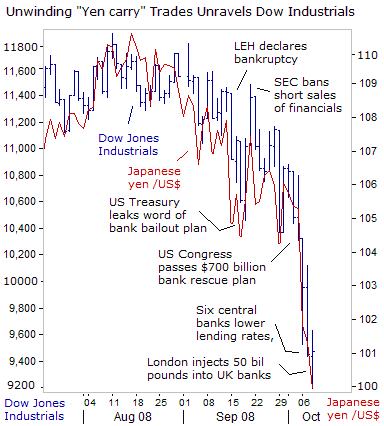 The "Yen carry" trade proved profitable while the US Dollar and other big currencies were climbing higher against the Japanese note. That helped speculative appetites get juiced-up in the global stock markets.

But this kind of highly leveraged carry trade quickly goes sour when the US Dollar – or whichever destination currency the Yen-borrowing speculator chooses – then falls vs. the Yen. Carry traders are quick to dump their speculative positions in foreign stock markets when the Yen is climbing, as they fight to avoid bruising foreign currency losses on their investment finance. And when carry traders all rush for the exits at the same time, the herd effect can create an avalanche of panic sales on global stock markets.

Over the past several years, carry traders inflated several emerging stock markets to astronomical heights, and also boosted more mature stock markets in the developed economies. But the current unwinding of "Yen carry" trades is a very destructive force to global stock markets, much like the interbank credit freeze or the nuclear credit-default swap (CDS) time-bomb.

The Dow Jones industrials have now lost 2,900 points since the start of Sept., including the biggest cumulative point loss on record for the blue-chip index. Along the way, the US Dollar also plunged 5% against the Japanese Yen. 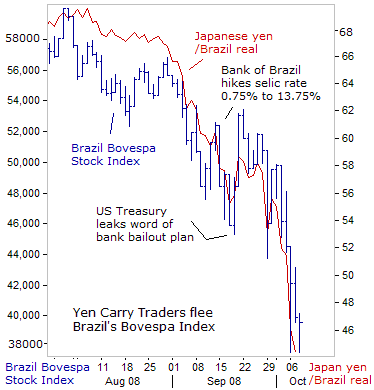 Brazil's Bovespa stock index was a favorite home for "Yen carry trade" money, acting as a play on the six-year bull run in world commodity prices.

Latin America's largest economy is dominated by energy, grains, and raw materials, putting Brazil in the sights of Yen carry-traders and proving a sweet spot for several years. Diversified oil and ethanol giant Petrobras, CVRD – the world's second-largest mining company and the top miner of iron ore – along with several steel mills were the market leaders.

But commodities markets are now heading for their biggest annual decline since 2001 and traders are exiting leveraged bets amid a synchronized global recession, which erodes demand for raw materials. The Reuters-Jefferies CRB Index has lost $280.6 billion, or 44%, from its July 3rd peak, and the demand for Brazilian exports is adversely affected.

As a result, Brazil's high-flying stock market and currency have been battered with Yen carry trades yanking money from emerging markets.

The Sao Paulo stock index has lost half of its market value since reaching an all-time in May '08. Brazil's currency, the Real, has meantime plunged by 34% against the Japanese Yen, even though Brazil is a net creditor for the first time, meaning it amassed more foreign currency reserves than all of its foreign debt.

The Bank of Brazil's overnight loan rate is 13.25% – way higher than the Bank of Japan's near-zero rates – yet the wide interest rate spread didn't prevent the Brazilian Real from plunging against the Yen. 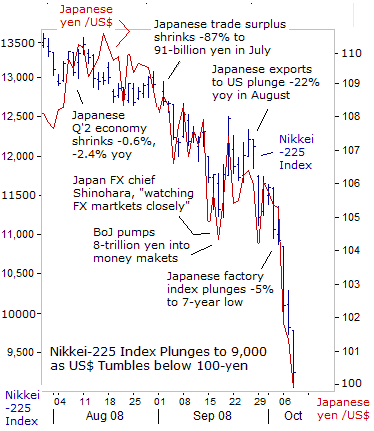 The unwinding of all these Yen carry trades lifted the Japanese currency to multi-years highs against Japan's major trading partners this fall, a move which could inflict a severe blow to Nikkei-225 exporters.

The Nikkei average plunged 9.4% on October 7th, its biggest daily drop since the 1987 stock market crash right up until Oct. 16's 11.1% drop. Growing fears of a global recession have led investors to wipe 11% off Toyota Motors on a sharply lower outlook for profits.

The Nikkei-225 index is now more than 50% lower from a year ago. Although Japanese banks have relatively little exposure to toxic sub-prime debt, other glaring warning signals for the Nikkei have been flashing for quite some time.

Japan's trade balance fell into a deficit in August for the first time since 1982, as high oil prices ramped up import costs while exports slowed to a crawl – thanks in no small part adding to that surging Japanese currency. It's made exports more expensive for foreign buyers, and now Japan faces the pain of an economy already stuck in a severe recession.

Japanese shipments to the US plunged a record 21.8% year-on-year in August, marking the 12th straight month of annualized declines. Yet the Bank of Japan said on Oct 8th it would not join the other six major central banks in slashing its interest rates in that historic co-ordinated move.

"We do not think that an interest rate of 0.5% is not accommodative enough. It's not that we would like to adopt a quantitative easing policy or that we see a need for further monetary easing," said Hirohide Yamaguchi, the BOJ executive director of monetary policy. 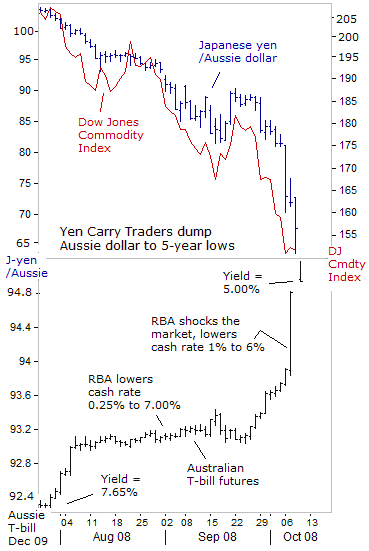 With the Bank of Japan now opting to leave its rates steady, "Yen carry" traders responded by hammering the Australian Dollar down to ¥65, a new five-year low, plunging 20% inside three days while governments and central banks across the world scrambled to rescue banks from collapse.

Guaranteeing bank deposits, and injecting tens of billions of dollars to thaw-out frozen credit markets, did nothing to stem the reversal of the world's huge Yen-denominated debts. Unwinding of the Yen carry trade also slammed South Korea's Won to 1,398 against the Dollar, the lowest in a decade, amid a stampede from the Kospi index in Seoul.

With the outlook for the global economy and demand for commodities deteriorating, Aussie futures traders are pricing more rate cuts by the Reserve Bank of Australia (RBA) before year-end, adding to the Aussie currency's troubles. Aussie T-bill futures enjoyed their biggest single-day rally on record on October 7th, and we should fully expect a 50-basis point RBA rate cut to 5.50% in November.

Already this month, the RBA shocked the markets by slashing its cash rate 100-basis points to 6.0%. But can that outweigh the destructive force of Japanese Yen returning to base?

Thanks to historically high oil prices, sovereign wealth funds belonging to Persian Gulf states like Kuwait, Qatar, Saudi Arabia and the United Arab Emirates amassed $1.5 trillion by the end of last year. Yet that's only one-fourth the size of assets held overseas by Japanese investors, making the "yen carry" trade one of the most feared weapons of mass destruction in global currency, commodity and stock markets today.

This article is just the Tip of the Iceberg of what's available in the Global Money Trends newsletter. Subscribers can also listen to bi-weekly Audio Broadcasts, posted Monday and Wednesday evenings, with the latest news and analysis.