END_OF_DOCUMENT_TOKEN_TO_BE_REPLACED

ELEVEN YEARS before its more notorious prison experiment, Stanford University introduced the world to a subtler but just as intriguing exercise, writes Tim Price on his ThePriceOfEverything blog...

...a landmark study in delayed gratification known now as the Stanford Marshmallow Experiment.

Children aged between four and six were taken into an empty room, then presented with a treat of their choice – a cookie, marshmallow or pretzel.

The children were allowed to eat this treat, but were told that if they could wait for 15 minutes without giving in to temptation, they would be rewarded with a second tasty reward.

In follow-up studies, those children who possessed special discipline were described by their parents more than 10 years later as "adolescents who were significantly more competent". It also transpired that the ability to delay gratification correlated with higher SAT scores.

There are quantitative aspects of investment analysis that can be taught. How to read a balancesheet, for example, or the comparative significance of various earnings or revenue metrics.

But there are some aspects of the investment process that cannot easily be taught, and having  patience may be the most important. The famed Canadian value investor Peter Cundill once remarked:

"The most important attribute for success in value investing is patience, patience and more patience. THE MAJORITY OF INVESTORS DO NOT POSSESS THIS CHARACTERISTIC."

James O'Shaughnessy in his book What Works on Wall Street performed the following analysis. For a period of over 50 years, he retrospectively selected the 50 stocks from the broad US market displaying the most expensive attributes by a variety of different metrics and the 50 stocks that were cheapest by those same metrics. He selected by price-to-sales ratios (PSR), by price/cashflow, by price/book, and by price/earnings.

He then rebalanced these holdings annually, so that those 50 stock portfolios were continually either the cheapest, or most expensive, by category. The results are shown below. 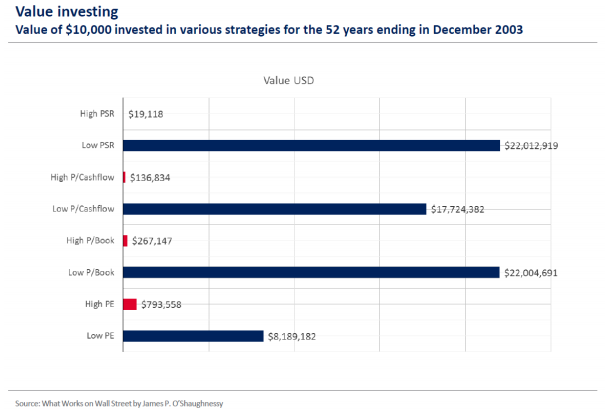 Take price/book – an assessment of whether a stock is trading above or below that company's inherent value (inasmuch as book value reflects that).

This sounds like a decent return until you see how a portfolio of $10,000 invested in the 50 lowest price/book stocks would have performed.

We would prefer to be long-term greedy.

First, as Wesley Gray points out, there are periods when 'value' underperforms:

"Over the last 10 years (June 1, 2007 to June 30, 2017) a generic portfolio of the cheapest stocks (labelled 'Generic Value (P/B)' in the chart below) based on price-to-book ratios earned a compound annual total return of 2.44%, compared with the S&P 500's total return of 7.10%. And to make matters worse, the generic value portfolio achieved the returns with nearly twice the volatility (29% vs. 15% annualized)."

Why did 'value' perform so poorly during the period in question?

Primarily because 40% of the 'value' portfolio was concentrated in financial stocks. (Conclusion: diversify.) 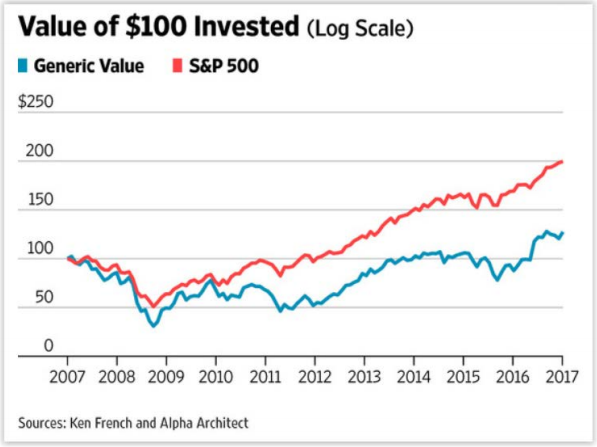 As Gray (and O'Shaughnessy) point out, price / book is only one of the metrics investors can use to assess comparative value. When expressed in the form of price / earnings ratios, 'value' actually outperformed the broader market over the same period: 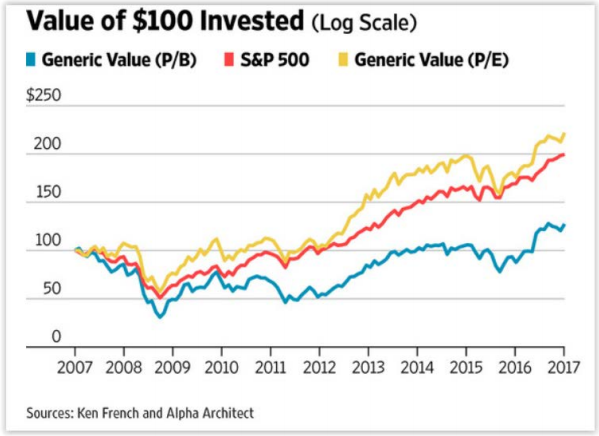 Clearly, 'value' can be different things at different times to different people. As Gray rightly observes:

"The debate as to why value investing generates higher expected returns than other forms of investing will rage on, but one thing is clear: Value investing is extremely painful and difficult to hold through thick and thin."

"Periods of excruciating short-term underperformance are a burden that all genuine value investors have to endure."

In other words, no pain, no gain.

In an intriguing supplement to these observations, Research Affiliates came out with an extraordinary article earlier this year, How not to get fired with smart beta investing, written by John West, Vitali Kalesnik and Mark Clements.

In the first instance, the authors demonstrated, similarly to O'Shaughnessy, that certain investment strategies and metrics led to sustained outperformance over time: 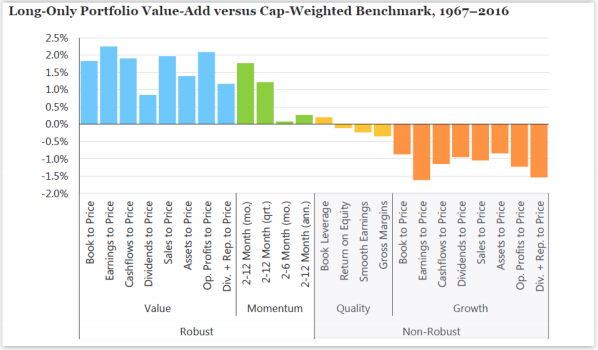 But their final observation was a killer. Despite the strong evidence that 'value' is the best performing investment strategy over the longer term, an adviser who recommends only value strategies has the highest chance of being fired by his client. This is primarily because different 'value' strategies (e.g. price / book and price / earnings) are highly positively correlated, so that when one underperforms, they all tend to.

Our conclusions from the above, and in relation to the current market environment:

Whether by way of geopolitics, the interest rate outlook, the economic growth outlook, or prevailing market valuations, this is shaping up to be an astonishingly challenging investment environment. We clearly believe in value.

Patience, however, may not just be virtuous now, but absolutely essential