END_OF_DOCUMENT_TOKEN_TO_BE_REPLACED

Straight to the poor house for yesteryear's hot-stock investors...
The ROSTER of financial market participants is not limited to bankers and traders, writes Tim Price on his PriceOfEverything blog.
It includes private investors (and pensioners!) and professional asset managers, each and every one of whom is stuck in the same leaky, storm-tossed boat: trying to assess value in a world where hyper-aggressive central bank stimulus distorts the valuations of all forms of financial assets.
Not that the Fed will admit the fact, but QE has consequences; so the withdrawal of QE has consequences, too – as unstable emerging markets are now discovering. Grant Williams recently pointed out that in 2013, despite $500 billion of direct purchases by the Fed, US Treasuries ended the year down.
Is there the risk, then, that removing hundreds of billions of direct monetary stimulus might have further adverse consequences for US Treasuries and for the global debt and credit markets that are priced off them ?
Happily, there is a way of assessing relative value across sovereign credit markets without having to rely on inadequate ratings agencies or subjective opinions about the attractiveness of various countries' debt structure and outlook.
The following chart, one of our favourites, is courtesy of Stratton Street Capital. It displays 'net foreign assets' as a percentage of GDP for a number of different countries. Net foreign assets is the totality of government, corporate and household sector foreign assets (assets owned abroad minus the value of foreign-owned domestic assets). 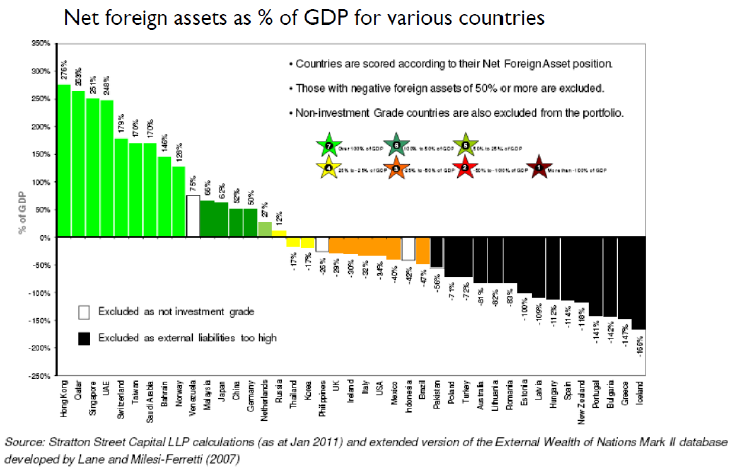 Why are we interested in net foreign assets ? Take the example of the UK. Her Majesty's Government will never realistically struggle to service her local currency-denominated domestic debts. Because (unlike the benighted countries of the Eurozone) she can always resort to the printing press to service them. She cannot guarantee that the purchasing power of her local currency will retain its value, but she can guarantee to service her domestic debts in nominal terms.
But the UK has also borrowed in US Dollars. HM Government and her economic agencies cannot print US Dollars (at least not legally) – so having foreign assets is critically important for her overall sovereign balance sheet.
Whenever countries get into difficulty by over-borrowing, it is invariably their foreign currency borrowings that cause the problem. This is precisely the problem facing many emerging market economies today.
The net foreign assets chart shows quite clearly that the world breaks down into two constituencies: creditor nations (shown in green above), and debtor nations (all the rest). The green countries are all objectively creditworthy (whatever you think of their subjective political risk). The black countries are all objectively poor quality credits. So as a value investor in bonds, we are only interested in lending our (clients') money to those countries that can afford to pay us back.
The chart has another use. In a deleveraging world, the heavily indebted countries will have a desperate need to attract foreign capital in order to service all of those debts. To do so, they are increasingly likely to devalue. So the chart has merit not just in credit analysis, but in currency analysis too. It has proved, and will likely continue to prove, a profitable thesis to favour creditor currencies as opposed to debtor currencies within the context of global deleveraging.
Within the context of (hopes and fears and the promise of) Fed tapering, the future path of US Treasury bond prices is by no means certain. But this should not bother anybody who engages with net foreign assets analysis: the US Treasury bond market is insufficiently attractive (either in credit quality or yield terms) to be worth investing into. Fundamentally more creditworthy countries and quasi-sovereign credits issued within them are also more likely to hold their value in the event of the deflationary environment that some see as an imminent threat.
Onto equity markets. The following chart is another of our favourites. It answers the rhetorical question, 'Why do so many investors favour stocks ?' It shows annualised real returns over 20 year periods for the history of the UK stock market. Source: Global Financial Data, Datastream. 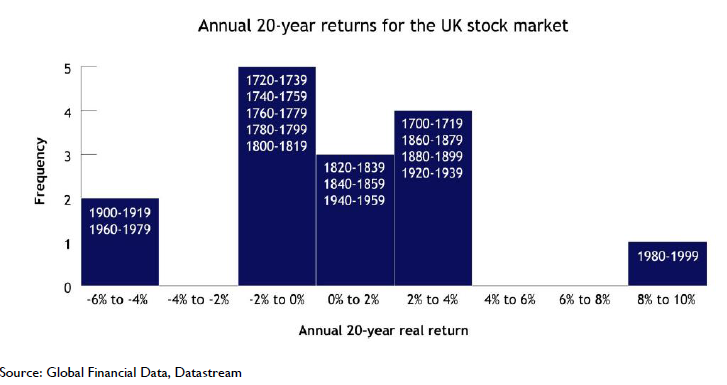 The bottom line is that stocks may be as popular as they are because most investors, professional or otherwise, lived or worked during the period 1980-1999, which as the chart shows was the most profitable discrete 20-year period to own UK equities in 300 years. Those 8-10% annualised real returns never occurred during any of the prior 20-year periods cited. The entire financial services industry, in other words, may well be guilty of recency bias (investment policy by means of the rear view mirror). The key driver of future returns, of course, is starting valuation. If you buy good assets sufficiently cheaply, you will always likely do well over the medium term.
Which brings us to another of our favourite charts.
The chart below, courtesy of Professor Robert Shiller, shows a hundred years' of US equity market returns. The two-digit numbers denote dates (in either the 19th or 20th centuries) and their place on the scattergram denotes their starting price/earnings ratio and their subsequent 10 year returns. 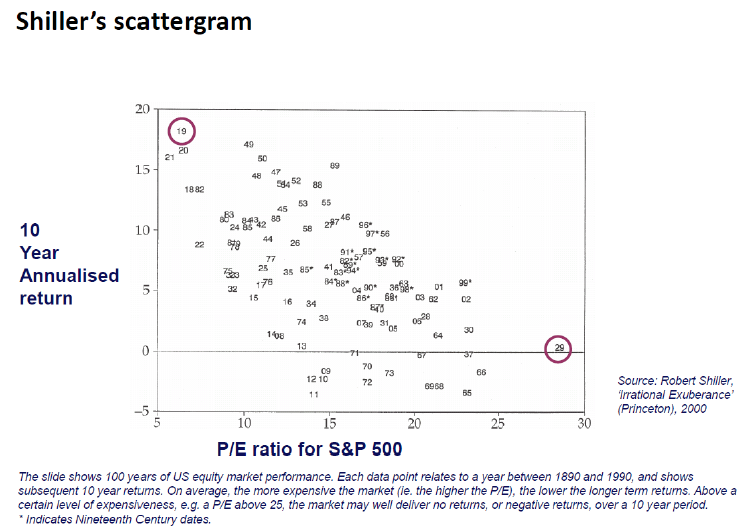 Take '19' for example. In 1919, the US equity market was bombed out (figuratively, if not literally), trading on a p/e of around six times. Since it was available extraordinarily cheaply, investors who bought in 1919 subsequently enjoyed great returns – about 18% per annum over the following decade. The reverse, of course, also holds. Investors who bought in 1929 paid the price for their euphoria. By paying nearly 30 times earnings to enter the market, they earned approximately nothing per annum over the subsequent decade.
The lesson is intuitively obvious. Whether the nature of the scattergram's data points is best described by a straight line or a 'best fit' curve, the implication could not be clearer: you will do better if you buy stocks cheaply than if you pay over the odds. The most alarming periods on the graph are arguably not represented by 1929 but by 1909, 1910, 1911 and 1912: the market was not intuitively overpriced, trading at midteen multiples – and yet investors still lost money on an annualised basis over the following decade. The stock market is riskier than widely assumed.
We conclude on a more positive, as well as forward-looking, note. The chart below shows OECD forecasts for the rise of the 'middle class' over the next two decades. The OECD defines 'middle class' here as "households with daily per capita income of between $10 and $100 in purchasing power parity terms". The solid green circle denotes the size of the existing middle class population by region; the wider blue 'halo' shows the forecast size of the middle class population in 2030. 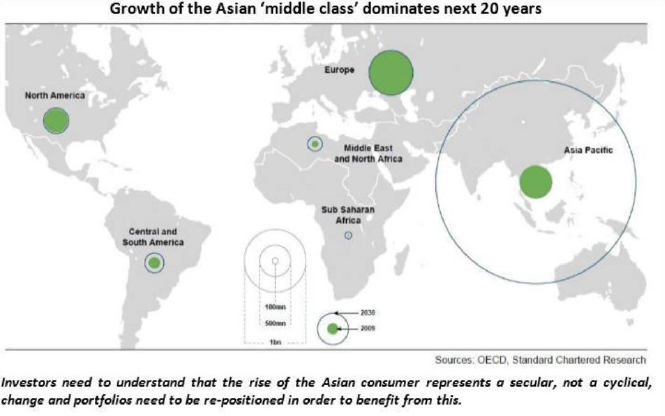 If the OECD is broadly correct, the middle class population of the US is set to remain more or less stable. That of Latin America is forecast to grow modestly. Europe (not, perhaps, surprisingly) seems set for stagnation. The North African middle class seems set to grow quite substantially, ditto sub-Saharan Africa (admittedly from a much lower base). But there is one extraordinary outlier: the middle class population of Asia is set to explode.
Asian companies writ large therefore appear to face a promising future. We already know that demographics in the region are superior to those in the West (younger populations, motivated to work hard in large part by the absence of the sort of social safety net and associated welfare burden that exists in western Europe).
So investors willing to buy into Asia have, essentially, one key decision to make: whether to buy shares of exporters to an (ailing) West; or to buy shares of businesses catering to that domestic emerging middle class. We favour the latter, as does Greg Fisher, whose Samarang Capital acts as investment adviser to the Halley Asian Prosperity Fund (last year's returns: 34% in USD terms). Just as bond indices tend to give investors the wrong steer as to which markets they should be invested in (the most heavily indebted countries are given the highest weightings in bond indices – there is no consideration made for fundamental creditworthiness), so most equity indices (MSCI Asia Pacific and MSCI Asia ex-Japan, one step forward please) tend to give investors the wrong steer about which stocks are the most desirable.
Bear in mind, for example, that many of the largest components of MSCI Asia ex-Japan are either low-margin exporters or State-run Chinese banks. And also bear in mind that MSCI Asia ex-Japan rather crucially doesn't include one of the most attractive markets in the region, namely, erm, Japan. Halley Asian Prosperity takes account of these index biases and operates outside their constraints, focusing instead on classic Ben Graham deep value and sustainable dividend yields.
In summary, the potential for further Fed-inspired volatility across asset markets remains a key theme for 2014. We endeavour to tackle this problem by a) concentrating our debt and equity investments exclusively in objectively high quality deep value assets and b) diversifying further, away from traditional assets and into areas such as trend-following funds and real assets, including the monetary metals, gold and silver.
In an ideal world, 2014 will mark a return towards something closer to genuine free markets and away from dangerous, central bank-manipulated horror stories in the making. In such an environment, a focus on buying good assets at cheap levels will pay dividends; simply buying stuff because it either is or used to be going up will be revealed as a one-way ticket to the poorhouse.