END_OF_DOCUMENT_TOKEN_TO_BE_REPLACED

Trump, Biden and stimulus...
WHETHER you support President Donald Trump or not, you must acknowledge that one of the bedrocks of his governing style is unpredictability, writes Frank Holmes at US Global Investors.
To some critics, Trump's behavior and decision-making process may seem erratic, but I believe they make a sort of sense when viewed through the lens of game theory.
Take, for example, his hot-and-cold stance on a new coronavirus stimulus bill the week before last. On Tuesday, Trump unexpectedly tweeted that negotiations with House Speaker Nancy Pelosi would halt until after the election. "After I win, we will pass a major Stimulus Bill that focuses on hardworking Americans and Small Businesses," he said.
That same day, Trump appeared to change his mind – reportedly after he saw how the stock market, and particularly airline stocks, reacted to the news. (I often say that he's the first American President who keeps his eye on the stock market and sees it as a gauge of his success.) "The House & Senate should IMMEDIATELY Approve 25 Billion Dollars for Airline Payroll Support," he tweeted. 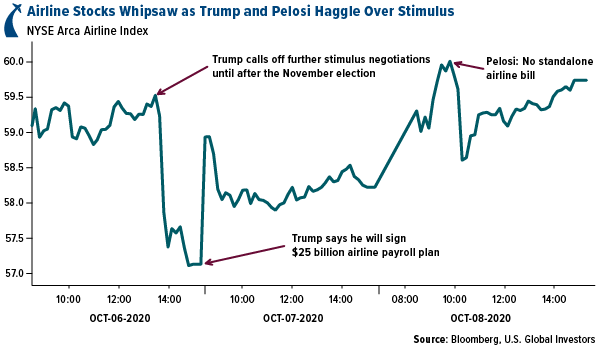 Again, to some, this behavior might seem irrational, but in game theory, unpredictability can be an effective tool that leaves an opponent guessing.
In case you're unfamiliar, "game theory" is the study of how and why people make decisions to achieve a certain outcome. More than one game theorist predicted Trump's victory in 2016, and I wouldn't be surprised to learn that some are doing the same in the 2020 contest.
That's despite Trump trailing Joe Biden in national polls. Meanwhile, PredictIt data shows that betting odds favor a Biden win, with the spread having widened further since Trump's positive Covid-19 diagnosis. But if you recall, then-candidate Trump was in a similar underdog position against Hillary Clinton heading into the election four years ago.

We're close to 15 days out from the election, and like Trump himself, it's sure to be unpredictable. It could very well be contested, as there have been reports of both candidates hiring hundreds of lawyers in anticipation of a legal battle.
That's why I believe it's best right now to listen to the market rather than the negative political rhetoric, to follow the trendline and not the headline. As I shared with you in August, markets have accurately predicted Presidential elections nearly three out of every four times since 1948. This is "Wisdom of Crowds" in action.
It's also worth being reminded that 80% of all stock trading today is driven by quants and algos, which have no political preference. Their models are completely agnostic to who's in the White House. Similarly, what matters most to us as active money managers are not the political parties but the policies.
Speaking of policy, the Wall Street Journal reported on Friday that the White House is preparing a coronavirus stimulus offer valued at $1.8 trillion, despite Trump's earlier comment on ending negotiations. It's been seven months since the last relief package, the CARES Act, was signed, and in that time, the number of Americans filing for jobless benefits has remained elevated. 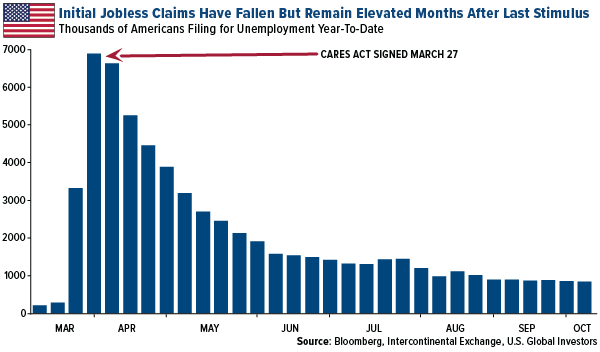 With the national debt now topping $27 trillion, such a package isn't good for the government's balance sheet, but it's good for gold. Indeed, the yellow metal traded up as much as 1.8% on the news.
And I believe there's additional upside potential–no matter who wins the election. In 22 days, millions of Americans will be betting on "red," millions of others on "blue." I'll be betting on gold.
I'm far from the only one. Leon Cooperman became just the latest billionaire investor to buy gold. In a recent interview, the Omega Advisors chairman and CEO said: "I bought gold for the first time in my life a week ago. I understand the case for gold. We're on the way to some banana republic situation. Nobody's worrying about the debt that's being created."
Meanwhile, ETFs backed by physical gold climbed to a record amount last Monday, touching 111.05 million ounces. According to the World Gold Council's (WGC) September report, global gold ETFs saw their 10th straight month of inflows last month. For the first time ever, such funds added more than 1,000 tonnes of gold so far this year, the equivalent of $55.7 billion.

Then there's gold mining stocks. Companies in the NYSE Arca Gold Miners Index put in a strong showing on Friday, finishing the session up 4.2%, its best single-day jump since August 17. For the week, the group advanced more than 4%.
Like the metal they mine, gold producers could see an even bigger jump when they begin to report third-quarter earnings. With gold having averaged $1911 an ounce during the quarter,
and hitting its all-time high of $2070 in early August, producers generated some of the highest revenues they've ever experienced, not to mention margins.
That was the message of my friend Pierre Lassonde, speaking to Kitco News last month. The legendary co-founder of Franco-Nevada said that "gold miners have never had it so good," explaining that the "margins they are producing are the fattest, the best, the absolute unbelievable margins they've ever had."
An explosion in exploration activity could take place as a result, according to Pierre. "I think the budgets will be up more likely by 50% to 75%" in 2021, he said.
It's not too late to participate!
On a final note, I'm very pleased to see how well luxury goods companies as a whole have held up during the pandemic months. Since the market bottom in mid-March, the S&P Global Luxury Index has increased more than 84%, close to double the return of the S&P 500. Giant multinational LVMH Moet Hennessy Louis Vuitton is up nearly 54%.

As the single largest weighting in the index, Tesla has had an incredible year, returning 418.7%. Other stocks that we like have also performed well, including Lululemon Athletica (up 49.5%), Remy Cointreau (41.4%) and Hermes International (14.3%).
I maintain my call for $4,000 gold in the next three years due to record stimulus spending and money-printing, which may lead to extreme currency debasement.