END_OF_DOCUMENT_TOKEN_TO_BE_REPLACED

Silver prices jumped 30% from 6-year low. More coming says Metals Focus...
SILVER PRICES will hold firm and rise further in 2016 according to the leading analysts behind a new report, with fresh gains driven by new investor and speculative demand, led in turn by low-to-negative interest rates worldwide.
After the 30% price surge to $18 per ounce from new 6-year lows between December and this spring, "Further, albeit modest, gains are likely for silver in 2016," says specialist consultancy Metals Focus, today launching its first annual Silver Focus report.
"A major change in market expectations regarding the number of US interest rate rises this year...spurred a sizeable flow of funds into precious metals," says director Philip Newman.
Metals Focus' average silver price forecast of $17 per ounce for the last 3 months of 2016 is based on its assumption that "ultra-loose monetary policies in the US, the proliferation of negative policy rate elsewhere, and rising market turbulence will [all] remain in place."
Investment purchases by coin and small-bar buyers, as well as through exchange-traded trust funds such as the 320-million ounce iShares ETF (NYSEArca:SLV), will help hold silver demand slightly ahead of supply in 2016, says Metals Focus' new report – little changed from last year's small deficit. 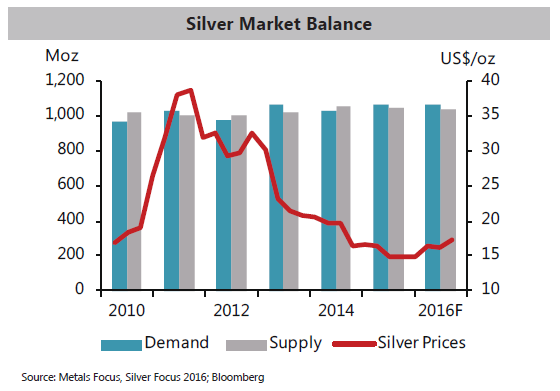 Global silver demand hit a new annual record in 2015 as prices fell 12%, according to precious metals analyst Cameron Alexander at Thomson Reuters GFMS, curbed only by "a fall in electronics, brazing alloys and solders, and photography [due to] weaker economic and industrial activity, particularly in developing countries.
"What is notable [was] the rapid expansion in the photovoltaic industry."
Silver demand for new installations of solar panels is on course to set a new annual record in 2016, with China accounting for half the world's projected build.
"Chile's solar industry has [already] expanded so quickly that it's giving electricity away for free," says the Bloomberg news and data agency today, reporting how wholesale electricity prices in the South American nation "reached zero in parts of the country on 113 days through April, a number that's on track to beat last year's total of 192 days."
On top of 29 existing solar farms in Chile today, another 15 are currently planned.
Alongside PV solar panels and Western investment buying, silver purchases by households in India have also been central to the metal's surging demand worldwide according to both GFMS and Metals Focus.
But while Metals Focus expects India's silver bullion imports "to moderate this year...but still remain at elevated levels," Alexander at GFMS notes that silver imports between January and April fell over 40% from the same period of 2015, dented by the surge in silver prices.
"Higher prices have seen destocking by domestic fabricators and investors," India's Business Standard quotes the GFMS analyst, leading local dealers to offer silver bullion at a rare discount to international prices.
GFMS estimates that India's silver imports will drop by more than one-third in 2016 from last year's record.
"Physical investment is by far the largest area of silver demand in India," agreed Metals Focus in a recent note, "contributing some 60% of growth in total demand over 2012-15.
"A further slowdown in investment demand is expected should prices continue to improve," it explained, both because it would deter 'bargain hunting' by new investors and also because it would "encourage some modest profit taking by existing investors."