END_OF_DOCUMENT_TOKEN_TO_BE_REPLACED

Silver supply set for years of deficit...
SILVER PRICES will fall in 2022 forecast leading analysts, averaging 5% below last year's decade high despite a second annual deficit of supply and new record-high demand, writes Atsuko Whitehouse at BullionVault.
2021 saw the supply of silver from mining and recycling lag global demand for the industrially-useful precious metal for the first time since 2015 according to specialist agency Metals Focus, with the largest deficit since at least 2010.
"We believe this is the start of a structural change in the market where we see deficits that will carry on for some time," said Metals Focus' director Philip Newman last week, presenting the new World Silver Survey 2022 for the mining industry's Silver Institute.
"But the deficit is relatively small [compared with total] demand, even though directionally it is an important change in the marketplace...[and] we need to put it in context.
"We cannot look at the 2021 and 2022 figures in isolation," Newman explained, because the cumulative surplus prior to last year will have "reduced the impact on the market." 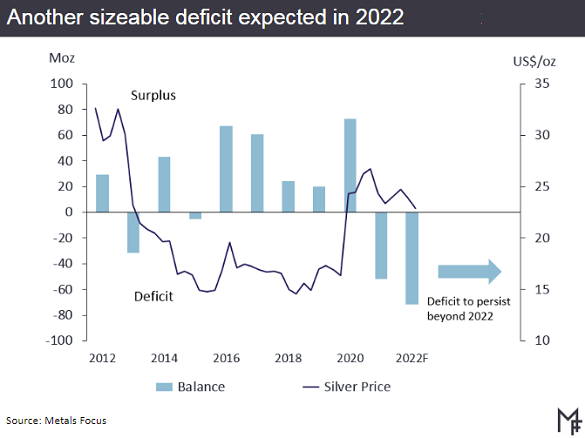 Silver prices in US Dollar terms rose 22% year-on-year in 2021, averaging $25.14 per ounce and hitting nearly $30 that January – the highest since 2013 – as the 'Reddit crowd' of private investors on social media was urged to buy bullion by calls for what was called a #silversqueeze of bearish traders.
Total silver demand worldwide surged by almost 1/5th in 2021 to 1.05 billion ounces, the highest level since 2015 and the first time since 1997 that all key sectors grew together.
While this surge was boosted by the post-pandemic recovery in global economic and industrial activity, plus rapid expansion of solar-panel installation, sales of silver coins and bullion bars leapt by more than 1/3rd to account for almost 28% of total offtake.
"Jewellery and silverware also posted healthy gains," says Metals Focus, "up by 21% and 32% respectively as economies re-opened and consumer sentiment began to improve.
"That said, both remained short of pre-pandemic levels, reflecting lingering Covid damage and elevated prices."
Silver supply meanwhile saw the largest annual growth in mining output since 2013, also driven by post-lockdown re-opening and led by Central and South America as No.1 miner Mexico produced almost 200 Moz for the first time, a level which Metals Focus' director of mine supply Adam Webb expects it to surpass in 2022.
Silver recycling flows climbed by almost 7% to reach an 8-year high, led by a jump in industrial scrap supply.
Total silver supply is now forecast to grow another 3% in 2022, led by higher mine production, but Metals Focus forecasts a 5% rise in global silver demand to another record high. 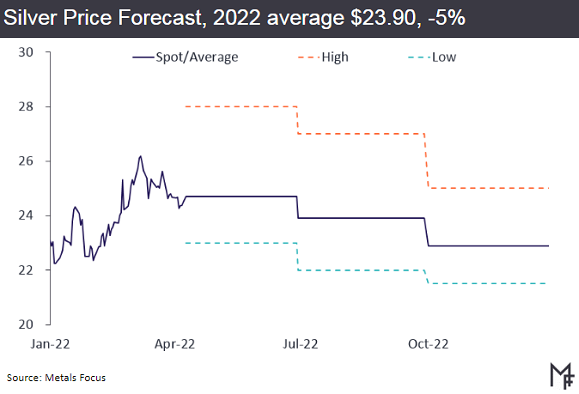 "Uncertainty around the Ukraine war and the possibility of a global recession presents a risk to industrial demand, which accounts for around half of silver consumption," said Newman at last week's Silver Survey launch.
"In terms of upside, it's more about institutional investors' activities. While [industrial and consumer] demand provides support, it rarely drives price rarely higher."
Institutional investment in silver was mixed in 2021 according to Metals Focus' analysis, with bursts of activity in the first half – due in part to the social-media #silversqueeze hype – but professional investors trading Comex derivatives contracts reduced their bullish positions by 77% across the year.
Russia's violent invasion of Ukraine then saw silver prices surge within 7 cents of $27 per ounce early this March, spurred by sharp volatility across commodity and financial markets. But the precious metal, which finds over half of its end-use demand from industrial and technological applications, has since fallen back amid fears of aggressive interest-rate rises in the United States and strict Covid lockdowns in China.
"Prospects of higher interest rates are likely to remain a headwind for the metal," reckons a separate note from commodity strategists at Swiss bank and bullion market-maker UBS.
"A silver price whose upside is likely to be capped gives investors the opportunity to engage in more active strategies."
"Later this year investor liquidations are expected to emerge," agrees Metals Focus, pointing to further central-bank interest-rate hikes with a retreat in energy-cost inflation.
"As such, the silver price is expected to ease back, although robust demand should lend strong price support, which will limit the downside."