END_OF_DOCUMENT_TOKEN_TO_BE_REPLACED

If China remains a one-way street for gold, it cannot become the world hub...
SHANGHAI this week launched a new international gold exchange inside the city's free-trade zone, writes Adrian Ash at BullionVault.
Most everyone thinks this is important because "global gold traders [see] the zone as a gateway to China's huge gold demand." But that's the wrong way round. Because if it's to have any real importance, let alone challenge London's dominance, the Shanghai FTZ gold bourse must mark a step towards China's gold output and private holdings flowing out into the world, not the other way round.
Start with the situation today. China and the UK could hardly be more different when it comes to gold. China is the world's No.1 gold-mining producer, the No.1 importer, and the No.1 consumer.
The UK in contrast...and despite spending its way to household debt worth 140% of income...has no gold jewellery demand to speak of. Private investment demand is also tiny compared to Asia's big buyers
On the supply-side the UK hasn't had any gold-mine output worth noting since 1938. Nor does it currently have any market-accredited refineries for producing large wholesale bars.
So you might think China plays a bigger role in the international gold market than does the UK. Yet nearly 300 years since it first seized the job, London remains the center of global gold flows, trading and thus pricing. For now at least. 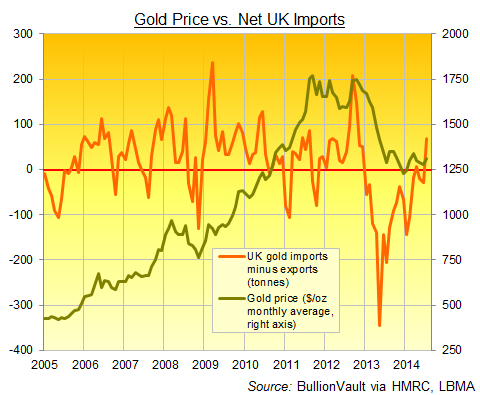 Since 2004, and with no domestic mine output and next to no end demand, the UK has imported over 6,800 tonnes of gold, according to official trade statistics – more than China but behind India, the former No.1 buyer. It has also exported nearly 5,000 tonnes, more than any country except No.1 bar refiner, Switzerland.
That's in a global market seeing some 4,500 tonnes of end-user demand per year. Because London is the heart of the world's gold bullion market, and the central vaulting point for its wholesale trade. (Same applies to silver, by the way – the UK was the world's No.1 importer and exporter in 2013.)
The relationship with prices is clear. When UK trade data ( hat tip: Matthew Turner at Macquarie) show metal piling up in London's vaults (which also offers the deepest, most liquid place for large investors to hold their gold in secure vaults, ready to sell or expand at the lowest costs) prices have tended to rise. But when the rate of accumulation in London is slowing, prices have tended to fall. Gold prices have sunk when London's vaults have shed metal.
On BullionVault's analysis, those months since end-2004 where Dollar gold prices rose saw net demand for London-vaulted gold average 38 tonnes. Falling prices, in contrast, saw London's vaults lose 16 tonnes per month on average (imports minus exports). Exclude the gold-price crash of 2013 and we get the same pattern. Average net inflows when Dollar prices fell were only 15 tonnes per month between 2005 and 2012. Rising prices, in contrast, saw London vaults add 48 tonnes net on average per month.
So what's happening with London-vaulted gold really does matter to world prices. Far more, to date, than what's happening to China's flows.
Why? The Middle Kingdom's modern gold boom has come in mining, importing and refining. But in exports it just doesn't figure. Because bullion exports are banned, thanks to Beijing deeming gold to be a "strategic metal".
Never mind that China now boasts 8 gold refineries accredited to produce London-grade wholesale bars. Out of a world total of 74, that's more than any other country except Japan. But Chinese-made wholesale bars never reach London (or shouldn't...) because they are dedicated by diktat to meeting its world-beating domestic demand alone.
China's inability to export gold bullion puts a big block on it affecting world prices. Because while metal is drawn into China when domestic prices rise above London quotes (the so-called " Shanghai gold arbitrage" trade) it cannot flow the other way when Shanghai goes to a discount. Traders can only exploit the price-gap in one direction.
Global investment flows are further locked out by Beijing's block on foreign cash coming into China – another key difference between the UK and China in all financial trading, not just gold. Shanghai vaults have therefore been closed to international gold investment to date. So the impact of global flows on pricing has completely passed China by.
This may start to change this week however, with the Shanghai Gold Exchange launching its new international gold exchange inside the city's huge free-trade zone on Thursday. Six major Chinese banks will provide clearing and settlement services. The first 40 approved members of the exchange include London market makers HSBC, UBS and Goldman Sachs. But whether global investors will choose to hold gold in Shanghai vaults remains to be seen. China's premier, Li Keqiang, approved Thursday's opening by visiting the free-trade zone. But that hardly masks the fact that China is still a one-party state, notionally Communist with strict controls on financial flows as well as political views. Whereas London, even in the dark days of 1970s exchange controls – which barred UK investors from buying gold, as well as moving cash overseas – still freely allowed foreign money to come and go as it pleased, not least through the City's world-leading gold and silver markets.
Remember, China's gold market has only answered Chinese demand so far. Its mine-supply leads the world...but cannot reach it. China's demand has needed further imports from abroad to supplement what Chinese mines produce. That demand leapt when world prices fell in 2013, doubling China's net imports through Hong Kong from 2012 to well over 1,000 tonnes. But that clearly shows that – for now – its gold market remains a price taker, not a price maker. The running is made instead by free-flowing investment cash choosing to buy or sell down gold holdings worldwide, and that decision shows up in London, center of the world's bullion trade.
Yes, Shanghai's new free-trade zone gold market marks one step towards changing that. Yes, the FTZ is very likely to replace Hong Kong as the stop-off point for gold imports entering the world's No.1 consumer market. But only a truly liberalized gold trade, with foreign cash and gold flowing in...and out...right alongside China's domesic flows will challenge London's 300-year old dominance.