END_OF_DOCUMENT_TOKEN_TO_BE_REPLACED

Analysts split over strength of platinum market demand as prices defy rise in ETF holdings...
PLATINUM ETFs have seen a jump in investor holdings this year, with the launch of South African Absa Bank's NewPlat fund taking the world total to new record highs.
This growth in platinum ETF holdings, however, actually "paints a depressing picture" according to UBS precious metals strategist Edel Tully, speaking at the London Bullion Market Association's annual conference this week in Rome.
Noting the earlier presentation from Vladimir Nedeljkovic, head of investments at Absa Bank's corporate investment division – part of Barclays Africa – "Where did those 700,000 ounces [needed to match new ETF shareholdings] come from?" Tully asked.
"The platinum market was supposed to be in deficit," with demand outstripping supply.
More notably, "Where would the platinum price be without these 700,000 ounces in this contract?" 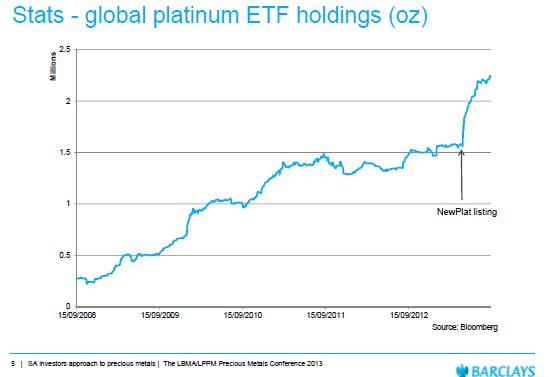 Marketed primarily to South African investment institutions, the Absa NewPlat ETF drew some 2.6 billion Rand ($286m) in its first four days when launched this spring.
South African trust-fund products now account for 53% of global platinum ETF holdings, Nedeljkovic said, compared with just 4% of gold ETF holdings.
Several speakers at this week's LBMA conference in Rome noted their attraction to platinum over gold. Because instead of being driven by Western investor sentiment, in the words of Christoph Eibl – partner at the $2.7bn Tiberius Asset Management – "platinum-group metals are much easier to predict.
"They have logical fundamentals," Eibl said, with demand coming primarily from industrial use, and no large above-ground stockpiles which may come back to market in the way "scrap gold" selling has in recent years.
Supply problems in South Africa – source of 80% of world platinum output each year – are likely to push prices higher, according to analysts from French investment and bullion bank Natixis.
"Adverse government decisions, a protracted power outage and most importantly a serious escalation in labour unrest could lead to a significant shortage and higher platinum prices," the bank's commodities team write.
But similar concerns to Tully's over those "logical fundamentals" were raised Thursday by Walter de Wet at Standard Bank. Because "despite ETF holdings rising, the platinum price continues to decline," he wrote.
Whilst holdings in gold ETFs – which are 24.5 times larger than platinum ETFs by weight worldwide – have declined further since October began on Tuesday, platinum ETFs have seen a further 2,000 ounces added. The platinum price, however, has dropped almost 3%.
The price of gold has slipped 1.1% over that time.