END_OF_DOCUMENT_TOKEN_TO_BE_REPLACED

An investment strategy that doesn't try to predict the future...

VOLATILITY, writes Addison Wiggin at the Daily Reckoning, tends to correlate with risk, but not always with return.

At least skydivers and race car drivers understand their risks — more or less — and are knowingly accepting these risks in the pursuit of a particular reward. By contrast, many investors assume risks unwittingly, and out of all proportion to the potential rewards.

They are driving race cars, not to win millions of Dollars, but to win a $50 gift card to Dave & Busters. They are tight-rope walking across Iguazu Falls, not to obtain international acclaim and a possible movie deal, but simply to get to the other side. That's not a good trade.

It is important to understand the risks one is taking...and to be as certain as possible that the risks and the rewards align intelligently.

Every investment carries some degree of risk, the successful investor merely insists that he receive compensation commensurate with the risk he assumes.

That's easy to say, but how do we do it? Most of us have a hard enough time identifying a truly compelling investment opportunity, much less trying to assess the risks involved. So what's our opportunity?

Good news. You don't have to be an expert stock-picker to rack up expert investment returns. But you do have to build a risk-resistant portfolio — one that is diversified in ways that will provide genuine protection against severe capital loss.

The "Permanent Portfolio" has delivered that kind of protection for more than 30 years.

The idea was that at any given time, two or three of these four components might underperform — but the other portfolio components would perform so strongly, you'd get an overall gain that would outpace any increase in the cost of living.

So during an inflationary environment like the 1970s, gold would provide the juice. In prosperous times like the 1990s, stocks would be the engine that pulls the rest of the train. In a garden-variety recession, your cash and long-dated Treasury positions would put you in good stead, while gold and stocks struggled.

Over time, the Permanent Portfolio has followed through on its objective admirably. From 1981-2010, the annual average return was a healthy 8.4%. Only two years have seen losses, and those were relatively small. 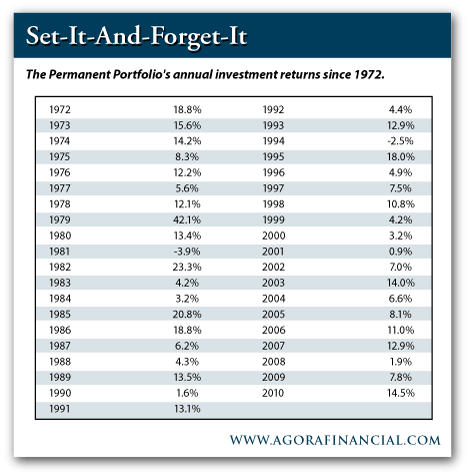 And what about 2008? The Year of Doom? The Permanent Portfolio held its ground, and then some — gaining 1.9%.

The Permanent Portfolio isn't about trying to catch a wave. It's about surrendering to the reality that you can't predict the future — and still building up a nice nest egg, whatever the future brings. Set it and forget it.

No doubt about it, Harry Browne's Permanent Portfolio has performed brilliantly during the last 30 years...and perhaps it will continue to do so. But conditions have changed since 1981. Maybe we should change with them. Browne's basic strategy remains as valid as ever, but maybe the components that populate Browne's strategy need to change.

For example, the Permanent Portfolio mutual fund (PRPFX), although based on Browne's strategy, has tweaked his original allocation somewhat. The mutual fund's allocation is as follows: