END_OF_DOCUMENT_TOKEN_TO_BE_REPLACED

All investing is risky – all the way down to zero if you settle for paper and credit...

LET'S IMAGINE you'd forgotten – or you've just set up a hedge fund in London – but shareholders come last in line when a listed company goes bust.

Yes, you get to vote on who joins the board of directors. You might even get first grab of any new shares that will dilute your investment.

But you'll typically get nothing if the company goes bust. And any business that hits the wall, as a rule, tends to go bankrupt because it's run out of cash.

Standing behind creditors and bondholders, therefore, waiting to collect whatever money is left, you can forget about how you'll spend your share of the pay-out. 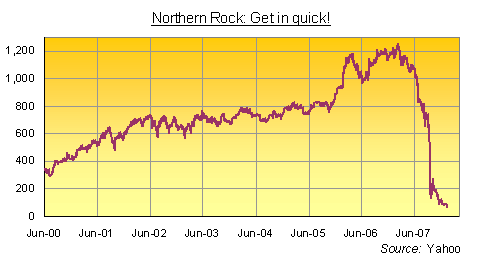 See that precipitous plunge starting in June of last year...?

That's where two chunky hedge funds, RAB Capital in London and SRM Global of Monaco, began piling into Northern Rock – one of the UK's top five biggest mortgage banks. Between them they built a stake that's now worth much less than it was.

On New Year's Eve, for example, RAB raised its stake to fully 7.5% of Northern Rock's shares in issue, even though its September investment had already shrunk by more than one half. (The price of NRK has since lost another fifth, going from £0.84 to just £0.68.)

"The Company is a strong and viable business," claims SRM, now holding some 10% of the stock. In an open letter to other Northern Rock shareholders at the start of January, "it is nothing like the 'lame duck' that some would have you believe," the Monaco money-men said.

"We are shareholders in a company that has true value in its assets, its brand and its employees."

Trouble is, SRM and RAB are indeed merely shareholders – and Northern Rock's "true value" also includes an emergency loan of £26 billion ($50bn) funded by UK taxpayers, plus an explicit promise from government of a further £30bn ($59bn) guaranteeing the cash deposits of the bank's saving customers.

Those cash savers stand right at the front of the creditors' queue (and they are mere creditors, too). Anyone caught holding bank stocks today might want to recall that fact before bleating about "true value".

"The Company's liquidity can be restored [but] the Company currently finds itself in exceptional circumstances and in these circumstances shareholders cannot rely upon the usual safeguards, including those of seeking shareholder consent for significant transactions."

Hence the Extraordinary General Meeting called for this week by RAB and SRM. Both were desperate to stop the nationalization of NRK's debts becoming a nationalization of its assets as well. So they raised a motion to limit how far the Board of Directors could dilute existing stockholdings in any private-sector rescue plan.

"Roughly two-thirds of shareholders, taking into account proxies, voted in favor of all of SRM and RAB Capital's four resolutions," notes Martin Flanagan in The Scotsman.

"The trouble was that three of them required 75% majorities."

So much for shareholder activism! Fewer than 600 people attended the EGM in person, according to The Daily Telegraph. The two hedge-fund managers had hoped for 8,400 to fill the arena they'd hired in Newcastle.

And as for "exceptional circumstances" whacking Northern Rock back in September, its perfectly sound strategy relied on short-term credit to such an extent that it had to beggar the Bank of England for emergency loans within days of the credit crunch biting. If RAB thought the assets and balance-sheet were so solid then, why didn't it pile in above £10 a share?

SRM now claims – and City rumor agrees – that the sudden and vicious shutdown of the world's short-term credit markets in the summer hit several other major UK mortgage banks, too. No naming names, but if the City dumped NRK because it knew the true extent of Northern Rock's woes, then what are private investors – you know, the little guy – to make of NRK's major competitors? 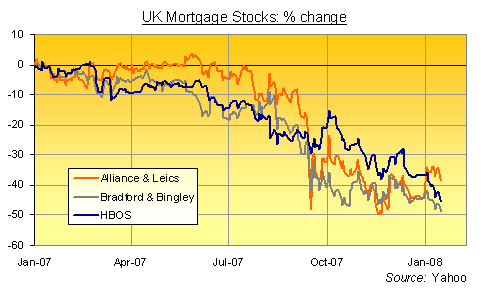 Their average 44% loss since the start of '07 compares with a mere 6% drop in the broader FTSE All-Share index.

And given that UK house prices have only just tipped lower after surging for 12 years, you might think the City bankers trying to arrange short-term loans for the mortgage lenders had "a word" or two with their equity desks, too.

Glancing at Northern Rock's chart, you might even guess you were right. But of course, that wouldn't be allowed, not with the City's much-vaunted "Chinese walls" to prevent it. Regulations forbid it!

"One of Britain's biggest property funds was forced to shut its doors to withdrawals [this week] after the slump in commercial prices triggered panic selling by small investors," reports The Guardian. "Scottish Equitable said that 129,000 small investors in its £2 billion property fund [$3.9bn] will not be able to access their money for up to a year..."

"It emerged yesterday that staff at some of the property managers have been informing key clients in advance that a fund is heading for suspension. The [financial watchdog] FSA said that such trading may fall foul of its rules regarding treating customers fairly."

Ooh, get you! Wouldn't want to let "key clients" find their way to the exit while private investors use nothing but Google as a flashlight now, would we?

"There are lots of rumors going about that other providers may be considering following Friends Provident and Aegon," says Jason Hemmings of Albannach Financial Management in Edinburgh.

Whoever's next, you can bet the City regulators – the Financial Services Authority – will be right on top of any "unfair treatment". Just like they kept on top of the collapse at Northern Rock, avoiding disaster, panic and a huge tax-funded bail out with no near-term hope of repayment.

"I was surprised they were not more angry," said Bryan Sanderson, chairman at the Northern Rock EGM, of the smaller investors who attended the meeting this week.

"They behaved very well indeed, which is a testimony to them all."

Well, maybe. Either that, or the little guys' good behavior shows that NRK's smaller stockholders have accepted what the hedge funds will not:

All investing is risky – all the way down to zero. If you want property rights with no risk of default, then you should Buy Gold outright. Shareholders get squat when things go to the wall. (Even cash-savers are mere creditors, sitting on risk that few if any accept.)

And if government steps in to bail out a business, it should've gone to the wall anyway.

Sure, the mortgage-book assets of NRK outweigh the tax-funded obligations, net-net. But a bank that needs a $50bn loan just to stay afloat...after suffering the first British banking run in well over a century...is hardly what you'd call a going concern.

Not unless you're trying to nick a quick profit, buying the shares amid a 95% plunge, and gambling on a free-market takeover in the teeth of a very tax-funded rescue.