END_OF_DOCUMENT_TOKEN_TO_BE_REPLACED

From one to the other kind of inflation, inevitably...
ONE OF the best things about being a partner in a research firm employing about 40 analysts, writes David Galland, managing director at Casey Research, is that I have unfettered access to really smart people.
While we have a great team with expertise across the spectrum, when it comes to monetary matters, my go-to guy is Terry Coxon, a senior editor for our flagship publication, The Casey Report.
Terry cut his teeth working side by side for years with the late Harry Browne, the economist and prolific author of a number of groundbreaking books, including the 1970 classic, How You Can Profit from the Coming Devaluation. The timing of Harry's book should catch your eye, because his analysis that the Dollar was headed for a big fall was spot on. Anyone paying attention made a lot of money.
As coeditors of Harry Browne's Special Reports, Terry and Harry made a formidable team for over 23 years. During this period, the two deeply researched the operating levers of the global economy, with a focus on the nature of money and impact of monetary policy. They also looked for ways to apply what they learned about macroeconomics into practical investment strategies, coauthoring Inflation-Proofing Your Investments. On his own, Terry wrote Keep What You Earn and Using Warrants.
Putting his expertise into action, Terry founded – and for 22 years served as the president of – the Permanent Portfolio Fund, one of the top-performing funds in history.
Having Terry on the Casey Research team as a senior economist has been a huge personal boon. By the time you finish reading my brief interview with him, I suspect you'll understand why...
David Galland: Let's start by defining terms. What exactly is inflation? Most people view inflation as a noticeable increase in the prices of everyday things. How do you define inflation?
Terry Coxon: The original use of the term in financial matters referred to money, not to prices. It meant an increase in the total amount of money held by the public. Such a monetary inflation can be engineered by government printing or, under a gold standard, by increasing the official gold price, as in 1933.
Monetary inflation can also be engineered by inventing a new category of legal tender, as in the case of the silver Dollars minted in the 19th century. And inflation of the money supply can happen without government tinkering, such as through the discovery and development of new gold deposits (as in the cases of the California and Klondike gold rushes), or through decisions by commercial banks to operate with thinner cash reserves in order to issue more deposits.
Today "inflation" usually refers to price inflation, which is a rise in the general level of consumer prices. That second use grew out of the public's experience of episodes of monetary inflation being followed by periods of rising prices.
Notice that with either use of the word, there is a little mushiness. During some periods, depending on what you include as "money" you may find either an increase or a decrease in the supply of the stuff. Suppose that the supply of hand-to-hand currency goes up while the quantity of bank deposits goes down by a larger amount. Is that monetary inflation or monetary deflation?
And what exactly does an increase in the "general level of consumer prices" mean? There's more than one way to define an index of prices, and there are many ways to tinker with it.
David Galland: In your view, have the US government and the Fed been following an inflationary policy?
Terry Coxon: Yes. Since the Lehman swoon in 2008, the M1 money supply (hand-to-hand currency plus checkable bank deposits) has increased by 72%, so the policy is clearly one of monetary inflation. And the Fed is avowedly committed to avoiding price deflation at all costs. They'll do whatever it takes to prevent price deflation, up to and including sacrificing virgins. That deflation phobia is necessarily a commitment to price inflation, and Mr. Bernanke has indicated that consumer prices rising at a rate of 2% per year would be ideal. So either way you define inflation, the Fed is all for it.
David Galland: Based upon your studies, just how extreme or extraordinary has inflation been since the beginning of this financial crisis?
Terry Coxon: A 72% growth in the money supply over a period of five-plus years is a gigantic increase. Take a look at the chart. It shows the annual growth rate in M1 over all five-year periods from 1959 to the present (dates on the chart indicate the end of a five-year period). As you can see, the only episode of monetary inflation that comes close to what is happening now is the money-printing spree of the high-price-inflation 1970s and early 1980s. 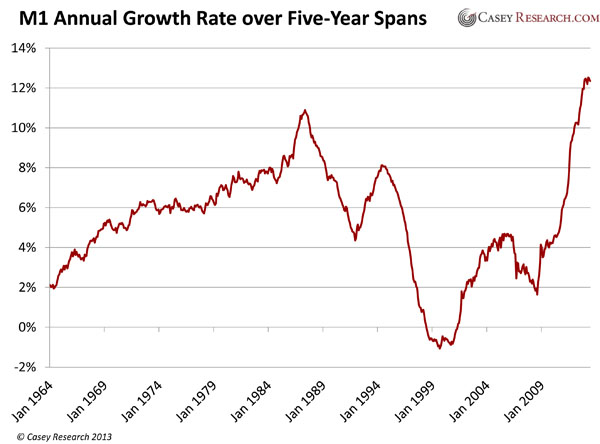 David Galland: How certain are you that the monetary inflation here in the US is going to ultimately manifest as price inflation?
Terry Coxon: You're asking for a lot when you say "certain" – certainly more than you're going to get from me. But here's why price inflation seems inevitable. The Federal Reserve can easily create more money. There's no limit to that power, as they've already demonstrated. At any hint of deflation, they will produce more cash. They can never know how much new cash would be enough, but because they see deflation as a vastly more serious problem than price inflation, they always will err on the side of too much new money. That attitude is a guarantee of price inflation.
David Galland: When price inflation begins, how significant do you think it will be? A little inflation? A lot? Hyperinflation?
Terry Coxon: Mr. Bernanke will get to visit his ideal world of 2% price inflation, but it will only be a whistle stop. The price inflation that lies ahead will be at least as bad as what happened in the 1970s episode, when the annual inflation rate approached 15%. The money that's already been printed so far may be enough to produce such a 1970s-size problem. And more new Dollars are coming, because the Fed won't stop printing until price inflation becomes obvious.
Making matters worse is that the devices for paring down the amount of cash that you need for the sake of convenience – such as credit cards, ATMs, and online banks – are now far more widely available and cheaper to use than they were in the 1970s. When price inflation becomes noticeable, people will turn more and more to those devices to reduce their holdings of value-leaking cash. That drop in the demand for money will reinforce the price inflation that originated in the Federal Reserve's increase in the supply of money.
David Galland: I know it can only be a wild guess, but based on your observations, how long do you think it will take for price inflation to become obvious?
Terry Coxon: Within twelve months after you hear that the economy has at last fully recovered from the recession.
David Galland: What is the biggest flaw with the deflation argument?
Terry Coxon: Whatever process someone might have in mind as a driver of price deflation, no matter how powerful that process might be, the Federal Reserve has the power and the will to carpet-bomb it with more new money. What the deflationists overlook is that if deflation ever seems to be winning, the Fed will simply extend the game for as many innings as it takes for inflation to win. In a fiat-money system, inflation always gets another chance.
David Galland: What would make you change your view that price inflation is inevitable?
Terry Coxon: Brain surgery. A time-tested way of protecting wealth is to move it out of one's native currency and into a location that's more economically sound. But is that even possible for US citizens these days? If so, what are the best places to explore for moving wealth offshore – and how is that best accomplished? Should you and your family follow your money and expatriate your home country?
All these questions – and many more – are answered in a new, free report by speculator Doug Casey. Titled Getting Out of Dodge, it offers specific, actionable advice for moving your wealth and your life safely offshore...