END_OF_DOCUMENT_TOKEN_TO_BE_REPLACED

But only a little, and only with caution still flagged...

The TITLE does not include a question market, and that is for a reason, writes Gary Tanashian in his Notes from the Rabbit Hole.

The gold sector's fundamentals, both sector-specific and macro, are improving. This was not the case during the last exciting upturn in the sector circa summer 2014.

Back then, everything from Russia's move into Ukraine to the Ebola scare were imagined to be sound drivers of the gold price. This stuff proved, as expected, to be wrong when the whole complex made new lows in November of 2014 (prior to this year's ultimate lows).

What is driving gold and the gold sector this year? The things that we have been saying for years now would be needed.

There are more details, but the above would paint a picture of a counter-cyclical environment, which is the investment environment for gold and would set quality miners up for a big rally or bull market.

Dial back to this past summer. Back then (on July 17) the Wall Street Journal called a bottom on gold exactly 1 week before it made its low at $1072 with its story Let's Be Honest About Gold: It's a Pet Rock.

This was not a bunch of lunatics fighting each other for the right to get on the soap box and rally the troops to buy gold and hide in their bunkers for fear of the Russian horde. That and the Ebola headlines were so contrarian bearish it was palpable.

No, this was a classic bullish contrary indicator and most recently as the HUI index of gold-miner stocks dropped to the long-term Head & Shoulders target of 100 (101 and change) we watched it scrape along the bottom of its downtrend channel for signs of a bounce, noting that the fundamentals were firming and aided, not hurt by the media this time.

Here is the linear scale chart NFTRH used to gauge this possibility last summer for subscribers, even as log-scale charts were put forth on the internet showing a breakdown below the channel for the relatively new cottage industry in gold bearishness to consider. Not this time boyz. 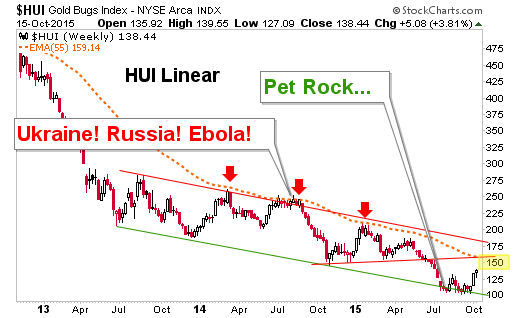 As you can see, it was touch and go at the channel bottom for weeks and I am not going to pretend to have been a resolute gold-stock bull during that process.

But again, it is different this time because sector and macro fundamentals are either in line or slowly creeping in the right direction. You probably don't need me to tell you that there is going to be some turbulence ahead, whether HUI gets to what we are still calling its "bounce" target in the 150s first or not. But the nature of the sector is much improved from a fundamental standpoint, both sector and macro.

The gold sector has been on a technical bounce that we have anticipated since mid-summer and managed since September. With sentiment getting over bullish and Commitments of Traders data putting a bull's eye on silver lately, the ingredients were in place for a negative reaction. Now it's come, it will pay for players to have their fundamental ducks in a row, unlike in summer 2014.

Many people know me as a chart guy but I am here to tell you that it is the fundamental backdrop that will be for all the marbles. The charts right now, bounce aside, remain in bearish trends for gold stocks (aside from a few little gems bucking the trend), gold and silver. We are following these trends consistently in NFTRH, but just as consistently we are keeping tabs on sector and macro fundamentals, which would lead the technicals just as most of the fundamentals noted above did in Q4 2008, only it was in quick time...like 100 times faster than today's situation.

Bottom line? The gold sector has been bouncing and this time it has a fundamental right to do so. The sector is in a bear market but the elements are aligning to end the bear. It is time to know what to tune out and what to take in when managing the process.

The negative reactions will come and only a clear view considering sector and macro fundamentals and technical analysis will define whether and from what levels those are buying opportunities.