END_OF_DOCUMENT_TOKEN_TO_BE_REPLACED

Buy Silver today, and a US vacation home could prove much cheaper – soon...

FOR MOST OF US, there is a handful of surefire luxuries that signify true wealth – a few pearls of conspicuous consumption that really say you've made it, writes Jeff Clark, editor of Doug Casey's Big Gold newsletter.

For me, this marker has always been a second home. My grandparents owned a vacation home, first in Arizona and then in Florida, when I was a kid. It was an annual highlight to travel there every year.

But something seemed to happen on the way to my generation's version of the American dream. Of all the people I know that have a second home, only one acquired it through their own hard work and success. All the rest inherited them.

These days – with high unemployment, shaky business conditions, desperate governments, weak real estate demand, and a suspect stock market, owning a vacation home is not even on the radar for most Americans. Paying their existing mortgage is the No.1 concern, something millions of homeowners still aren't able to do.

So how can I suggest a way to buy a vacation home in these conditions? Because there are two trends, long in motion, that I believe will continue working in our favor. And it won't take long for them to reach a culmination point, I believe – allowing those of us with such a goal to see it realized. The chart below gives an eye-opening visual of my claim... 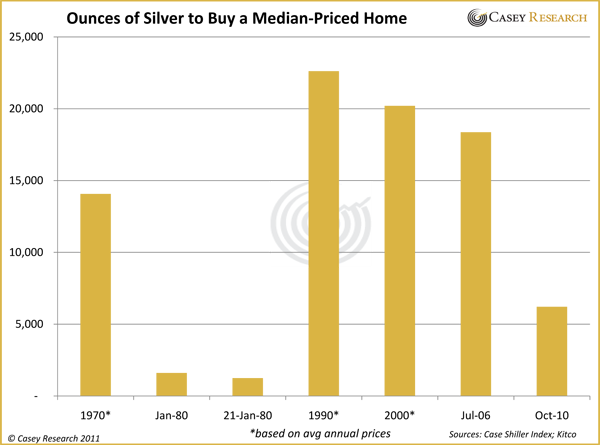 The chart shows how many ounces of silver have been needed to buy a median-priced home in the United States.

You may think the ratio won't fall further since it's already declined 69.2% in the last ten years. But I would point out that it collapsed 88.6% during the 1970s – and that was amid a 170% rise in home values! Only economists on government-laced Kool-Aid could fathom home prices rising that much over the next decade.

For those of you who have a glass-half-full prognosis for the near future of real estate, I'd like to challenge an assumption you may be making; namely, that real estate prices rise in an inflationary environment. While the massive amount of quantitative easing and buying of mortgage-backed securities will likely put a floor under prices, it's the black swan of rising interest rates that could derail any significant recovery.

Once rates start climbing, home-buying will become more unaffordable, keeping demand low, especially when the starting point is a million-plus hangover of vacant houses. And if mortgage rates return to the 12-14% levels we saw in the last big inflationary period of the early '80s (they peaked at 18% in 1982), real estate prices aren't going anywhere but down in real terms. They may rise in nominal Dollars, but after accounting for inflation, they'll still lose ground. Your half-full glass might not get filled for a long time.

Hard assets, in contrast, are rising thanks to the amount of money being created from nothing and thrown at our problems. That volume of money right now is unprecedented in history, so inflation is a when question, not an if one. This process can and will result in a devalued currency unit, and a direct beneficiary of that is rising precious metal prices.

In real terms, real estate will go down, precious metals will go up.

It's interesting to look at this trend with gold, but it's absolutely fascinating when you plug in the numbers for silver. Not only may silver outperform gold before this is all over, but silver is more "affordable" to the masses.

All this adds up to one thing: the number of ounces of silver to buy a median-priced home at some point in the near future will likely fall below 2,000. And given the unrelenting abuse to fiat currencies, it's very possible it could hit a measly 1,000 ounces. Now that's affordable.

The fine print, of course, is that you actually Buy Silver now, and then sell when the Silver Price is high. You'll also need to pay the tax on your gains from another source. But I would argue that even a modest budget could come up with a few extra ounces to offset the tax bill.

Think silver is too volatile to use as a savings vehicle? The price fluctuates, no doubt, but ask yourself this: if you were to put ten grand into a savings account and another ten into silver, which asset will have more purchasing power five years from now? Even with the savings account earning interest, I believe you'd be able to purchase much more with the stash of silver when you go to spend the proceeds.

Doug Casey is insistent real estate hasn't bottomed because we're on the cusp of a depression. I'm convinced the Silver Price won't be stopping when it hits $50. If we're right about these trends, that million-Dollar vacation home you spotted on Nag's Head five years ago could be had for less than 2,000 ounces of silver.

Buy Silver today at the lowest prices, and store it – securely – in dedicated vaults at the lowest costs using the award-winning BullionVault...