END_OF_DOCUMENT_TOKEN_TO_BE_REPLACED

WHAT'S IN A NUMBER...? Ignoring the day-to-day noise, more than a handful of gold dealers and analysts reckon gold will hit $2,200 an ounce before this bull market is done.

Why? Because that's the peak of 1980 revisited and re-priced in today's US dollars.

Which sounds simple enough. Too simple by half.

First, betwixt spreadsheet and napkin, there's often a slip. Several targets you'll find out here on the net put the old 1980 top nearer $2,000 in today's money. Another Gold Coin dealer puts the figure way up at $2,400 an ounce.

Maybe they got the jump on this month's Consumer Price data. Maybe $200 to $400 an ounce just won't matter when the next big gold top arrives. But maybe, we guess here at BullionVault, an extra 20% gain (or 20% of missed profits) will always feel crucial when you're looking to buy, sell or hold. Perhaps that's the problem.

Either way, having crunched (and re-crunched) the numbers just now, even we can't help but knock out a target...

Second, therefore, the lag between current Gold Prices and that old nominal high scarcely looks a good reason to start piling int gold today. "Ask the investor who rushed out to Buy Gold precisely 29 years ago, at $845 an ounce, about gold as an inflation hedge," as Jon Nadler – senior analyst at Kitco Inc. of Montreal, the Canadian dealers and smelters – said on the 29th anniversary of gold's infamous peak last week.

"They could sell it for about $845 today...[but] they would need to sell it for something near $2,200 just to break even, when adjusted for inflation."

This lag, of course, can be turned any-which-way you like. For several big-name Gold Investment gurus, including Jim Rogers and Marc Faber, it mean gold has got plenty of room-left-to-soar, compared at least with the last time investors began swapping paper for metal in a bid to defend their savings and wealth.

But for the much bigger anti-gold-buggery camp – that consensual mob of mainstream analysts, op-ed columnists, news-wire hacks and financial advisors – gold's inflation-adjusted "big top" just as easily stands as a great reason not to Buy Gold. Ever.

"An investor in gold [buying at the end of 1980] experienced a reduction in purchasing power of 2.4% per annum," notes Larry Swedroe, a financial services director at BAM Services in Missouri, writing at IndexUniverse.com and recommending Treasury inflation-protected TIPs instead.

"[That was] a cumulative loss of purchasing power of about 55%...Even worse, that does not consider the costs of investing in gold...[and] while gold has provided a slightly positive real return over the very long term, the price movement is far too volatile for gold to act as an effective hedge against inflation."

Volatility in Gold can't be denied. Indeed, it's the only thing we ever promise to users of BullionVault. (They can judge our security, cost-efficiency and convenience for themselves.) Traditionally twice as volatile as the US stock market, the price of gold has become five times as wild since the financial crisis kicked off. But price volatility has also leapt everywhere else, not least in the S&P 500 index – now 8 times wilder from the start of 2008. The Euro/Dollar exchange rate is more than four times as volatile as it was back in Aug. '07, when the banking meltdown began. Even Treasury bonds have gone crazy, making daily moves in their yield more vicious still than even the Gold Price or forex!

So putting sleepless nights to one side (you may need to ask your pharmacist), the key point at issue remains "long term" inflation. 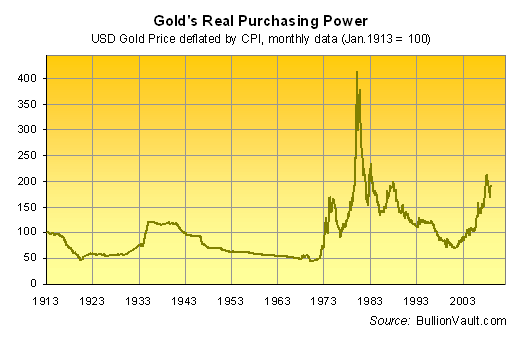 This chart shows the value of Gold Bullion – measured in terms of purchasing power, as dictated by the official US consumer price index – since the data series begins, back in 1913. (Hat-tip to Fred at the St.Louis Fed; the current CPI calculations and headline rate might bear little resemblance to personal experience of retail inflation, but for long-run data where else can we go?)

Starting at 100, our little index of gold's real long-term value has then averaged 97.8 over the following 96 years...pretty much right where it began. As you can see, however, that long-term stability includes wild swings and spikes. And whether gold is tied to official government currency (as it was pre-1971) or allowed to float freely on the world's bullion market, volatility looks the only sure thing.

The starting-point, 1913, just happens to be when the Federal Reserve was first founded. It was given the easy-as-pie challenge of furnishing the United States with an "elastic currency".

Okay, so it ain't quite made of rubber just yet. But the Dollar's own value in gold – by which it used to be backed, pre-1971 – just keeps brickling and bouncing around like it's being used to play squash.

What the chart above offers, however, is a picture of gold's real long-run value outside of Dollar-price fluctuations.

"With the right confluence of economic and geopolitical developments we should see gold break through $1,500 and then $2,000 and then possibly still higher round numbers in the next few years," said Jeffrey Nichols, M.D. of American Precious Metals Advisors, at the 3rd Annual China Gold & Precious Metals Summit in Shanghai last month – "particularly if we get the type of buying frenzy or mania that often occurs late in the price cycles of financial and commodity markets.

"This is hardly an audacious forecast when looked at relative to the upward march in consumer prices over the past 28 years. After all, the previous high of $875 an ounce in January 1980, when adjusted for inflation since then, is today equivalent to more than $2,200."

Audacious or not, as Nichols points out, the thing to watch for would be a "buying frenzy" – a true "mania" amongst people now Ready to Buy Gold that sent not only its price but also its purchasing power shooting very much higher.

Because for gold to reach $2,200 an ounce in today's money (if not $2,615...) would mean something truly remarkable in terms of its real long-run value.

"Gold during the course of the bull market, which has several more years to go, will go much higher."

But "much higher" in nominal Dollar terms is not the same as "much higher" in terms of real purchasing power, however. More to the point, that previous peak of $850 an ounce – as recorded at the London PM Gold Fix on 21 Jan. 1980 – lasted hardly two hours.

Defending yourself with gold is one thing, in short. Assuming gold is the perfect inflation hedge is quite another. And taking peak profits in gold – as with any investable asset – is surely impossible for everyone but the single seller to mark that very top price.

That doesn't diminish gold's real long-term value to private investors however, as we'll see in Part II – to follow.