END_OF_DOCUMENT_TOKEN_TO_BE_REPLACED

In seven of the last ten years, the Gold Price hit its annual peak in November or December...

MOST PEOPLE who follow gold know the metal has a seasonal tendency to perform better in the fall and winter than in the spring and summer. Indeed, since 2001, the annual high for the Gold Price has occurred after Labor Day every year except two (2006 and 2008). Further, that peak was hit in November or December in seven of the last ten years, writes Jeff Clark, editor of Big Gold at Casey Research.

So, are we destined for new highs in the Gold Price between now and New Year's Eve? And what about Gold Mining stocks?

Perhaps one way to answer the first question is to determine if gold has been following its seasonal price trends so far this year. If it has, we might have a reasonable expectation of higher prices ahead. Let's take a look…

The following chart shows the average monthly performance of the Gold Price from 2000 to present, along with its returns so far this year. 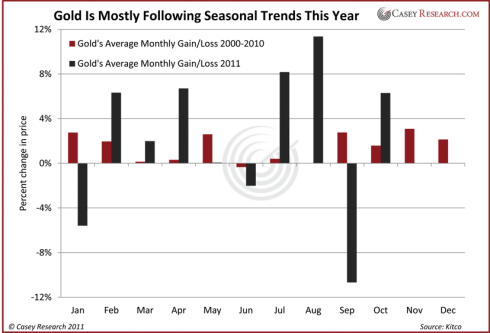 As you can see, this year's Gold Price has followed the typical seasonal pattern in every month but three. This is actually a strong correlation, because seasonal patterns are adhered to only about two-thirds of the time. (The performance appears more volatile than normal, but it's not; the averages are a composite of eleven years' worth of data.) You'll also notice that gold has had only three losing months this year.

If this trend were to continue, it suggests that gold's 2011 high may yet be ahead, meaning the September 5 price of $1,895 (London PM Fix) would be eclipsed.

Here's the picture for gold stocks (as measured by the AMEX Gold Bugs Index). 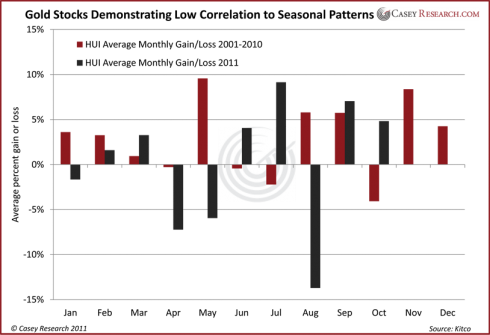 As a group, gold stocks have performed in the opposite direction of the seasonal pattern in six of ten months so far this year. This might speak to some of the frustration we gold stock investors have had, particularly after they bucked the trend in May and August with big sell-offs.

This doesn't mean, of course, that gold stocks won't rise over the next two months. In fact, the average cumulative gain of gold stocks during this 60-day period is 11.8%. You'll also see that November is typically the second strongest month of the year.

Perhaps another way to determine if a new high for gold is just ahead is to look at its average return from the summer low to the fall high. Since the bull market began in 2001, the average gain in the Gold Price from the summer low (June, July, or August) to the autumn high (September through December) is 20.7%. Our summer low this year was $1,483 on July 1, so $1,790 would match the average...a price we've already exceeded.

Of course, this ignores the effect of another country in Europe blowing, up or the Fed instituting another QE program, or Israel attacking Iran, or…

In the big picture, though, all this talk about where gold might go in the short term is just for fun. It's clear that sooner or later we'll be looking in the rear-view mirror at a $2,000 Gold Price. And even that level is well short of any inflation-adjusted high.

The ocean barge of inflation hasn't hit our beach yet – but it's been spotted offshore.