END_OF_DOCUMENT_TOKEN_TO_BE_REPLACED

Why have gold stocks failed to keep pace with the Gold Price since August...?

YOU'D HAVE TO BE a monk living in isolated penury to miss the fact that the Gold Market is on a tear, writes David Galland, managing director of Casey Research.

In a gold bull market, an investor would expect the profits on Gold Mining Stocks to be a multiple of those to be had from Gold Bullion. That seemingly intuitive leverage comes from simple arithmetic.

Once a gold producer covers its production costs, then each 1% rise in the price of gold can translate into a 5%, 10% or even richer improvement in the bottom line. For a company such as Barrick Mining – the world's No.1 producer with 125 million ounces in proven and probable reserves – even a $1 per ounce increase in the Gold Price can mean big money.

Yet the gold stocks have stalled in recent months; between August 2007 and Feb. 2008 gold bullion rose 42%, but Gold Mining Stocks were up just 37%.

What's going on? Is it that, in their concern over the broader equity markets, people have forgotten that gold stocks are associated with gold? Or is something else at work here?

The answer, we believe here at Casey Research, is "something else".

While there are a number of plausible reasons for Gold Mining Stocks lagging of late, we have come to the conclusion that the true explanation reaches much farther into the past. It's that the managements of the gold producers have only recently escaped the state of fear they operated under during gold's 20-year bear market.

Consider the fact that as recently as 2002, the price of Gold was still trading near $280. Against that number was a cash cost of around $250 per ounce for a typical company. That cost figure is about as low as the number could go, and it was the response of an industry beaten down and huddling in a trench.

Caution lingers after the reason for it has gone. As gold began its upward move in 2002, it did so against the backdrop of an industry still in mothballs and still run by managers whose primary skills were cost cutting and frugality. This is important on a number of fronts.

Having been trained in the acid bath of razor-thin margins, management was intensely skeptical about gold's rally. They suspected it might be just another bear market trap, ready to punish unwary optimists who parted with cash to ramp up production.

In the hunkered-down years, miners focused on the higher-grade, easy-to-mine material that gave them the best shot at turning a profit, however small that might be. And being in survival mode, they were extremely cautious about buying new equipment or maintaining a large workforce. Employee rosters were reduced to the bare minimum.

Because staying in business was such an urgent goal, they were willing, even eager, to sell future production at a set price. That was a perfectly rational strategy in a bear market, because it at least assured they would receive a price that covered the known costs.

With all these factors taken together, it's easy to understand why the industry was slow to respond when gold started rising. In fact, it was only in February 2003, with the Gold Market trending over $350, that Barrick Gold Corp. – the world's largest Gold Mining Stock – began the expensive process of unwinding its hedges. And it wasn't until November of that year that the company announced it would stop forward selling altogether and would eliminate its entire hedge book.

Once the turning point came – when management finally realized the bull market was for real -- the industry began to scramble to catch up. Which, in a choo-choo industry like mining, means hiring and training lots of people, buying or refurbishing the equipment needed to reestablish production on second-tier deposits, upgrading facilities, building expensive new mills, etc., etc. And, of course, dealing with the challenge and expense of unwinding hundreds of millions of dollars worth of forward hedge contracts.

The rebuilding of the gold mining industry, in short, really only began in earnest over the past few years.

As would be expected, the costs associated with rebuilding the industry sent big hits to the bottom line, resulting in the kind of ugly financial metrics that repel institutional investors.

The metrics were not at all helped by the shift away from high-grade ore, because the lower the grade, the more the material you have to dig, hoist, haul and process, meaning increased production costs. In addition, the industry rebuild occurred against a backdrop of generally rising inflation and a falling dollar, which helped push the cash cost of production up by more than double from the mothball years, keeping the miners unattractive as investments.

By contrast, the base metals companies, which had hit bottom earlier, near the end of 1998, had already emerged from the mothball stage, thanks to increasing demand from China and elsewhere. They were, as a result, well on the road to recovery when the big price increases for base metals kicked off in 2004. So, while the gold miners have been widely shunned as ugly ducklings in recent times, the base metals sector has been enjoying salad days, reflected in multi-billion mergers and acquisitions and, of course, sharply higher share prices.

Here at Casey Research, we are of the firm opinion that, now that the biggest costs related to restarting their industry are behind them, the big gold companies are poised to take off. The proof should come in rapidly improving margins which, lo and behold, we have begun to see in the quarterly reports now being released.

Just last week, Goldcorp announced that fourth-quarter profit had nearly quadrupled over the same quarter the year before. And then Kinross announced that it, too, had posted a record quarter, with profits up almost three-fold over Q406. Meanwhile, Barrick reported that net profit for 2007 was 28% ahead of 2006. In addition, Barrick is feeling sufficiently flush (and optimistic) that it's buying out Rio Tinto's 40% interest in the Cortez Hills joint venture for $1.695 billion...cash.

And the exception to this picture of profit eggs finally hatching is only superficially an exception. Newmont announced a loss of $1.8 billion in 2007. But most of it came from a one-time house cleaning -- $531 million to unwind 18.5 million ounces of forward gold sales and a $1.6 billion non-cash charge to terminate operations related to merchant banking. Look past those elements, which are an overdue recognition of money that went down the drain years ago, and you find that Newmont's mining business is actually in a healthy position.

Looked at from another angle, Newmont took these charges now because they could afford to do so and because they felt that the damage to their share price would be softened by the strong performance of their current operations. Now that they've cleaned up the books, they too are dressed up to join the profit party.

It won't be long before others also note the pending improvements to the bottom lines of the big gold companies. The investment herd, we are convinced, is coming and, we expect, coming soon. 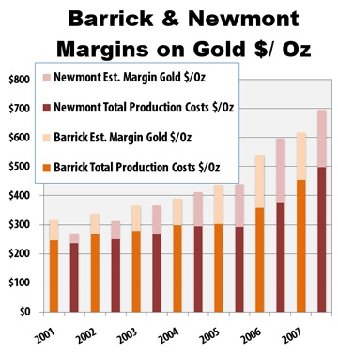 How to profit? First and foremost, if you're willing to take on the unavoidable management, stock market, financial and credit-default risks of investing in Gold Mining Stocks, you want to be moving into the established producing companies post haste.

Secondly, higher-risk investors should seriously consider moving some funds into the higher-quality junior exploration stocks. History has proven that, absent an exciting discovery story, the big gold stocks must get in gear before investor sentiment can reach the critical mass needed to ignite the juniors.

History also shows that as profitable as the big gold companies are in a bull market, returns on the juniors can blow those away. Exponentially. This upside, of course, comes with a greater degree of risk.

But paradoxically, this risk has been largely mitigated by the majors' slow take-off. That's because, anticipating that the gold stocks would follow the metal higher – and history shows no example of them not doing so – investors have already poured record amounts of money into exploration programs. As a result, we now know which companies have the goods – significant discoveries that juniors have spent tens of millions to define and prove up with the clear intent of selling to the majors.

The missing element, of course, has been that, until recently, the majors didn't have enough free cash to make those acquisitions. That is about to change.

While you don't know me and so will have to take my word for it, I am not the type of person to fall in love with any investment. And any time I feel such an urge coming on, I check all my assumptions twice and then check them again. That said, I will also say that I have never been more bullish than I am now on Gold Mining Stocks as a whole, with an added nod to the well-run exploration companies.