END_OF_DOCUMENT_TOKEN_TO_BE_REPLACED

Deflation isn't the greatest danger today. But it's worth weighing it against Gold Mining stocks...

And indeed, deflationary forces seem to have the stronger grip right now than inflationary ones. So if deflation is the next reality we have to face, what happens to our favorite stock investments?

There's lots of data about what Gold Prices do during periods of high inflation, but less so with deflation, partly because we don't see a true deflation all that often. But of course we've got the biggie we can look at, and the seriousness of the Great Depression can give us a big clue as to how Gold Mining stocks also behave in a true deflationary environment.

First, we know what happened to the stock market in 1929, and in that initial shock, Gold Mining stocks crashed too. A rally ensued in most equities until the following April, including gold producers. Then the Dow took a one-way elevator ride down for the next two and a half years.

What did gold stocks do? 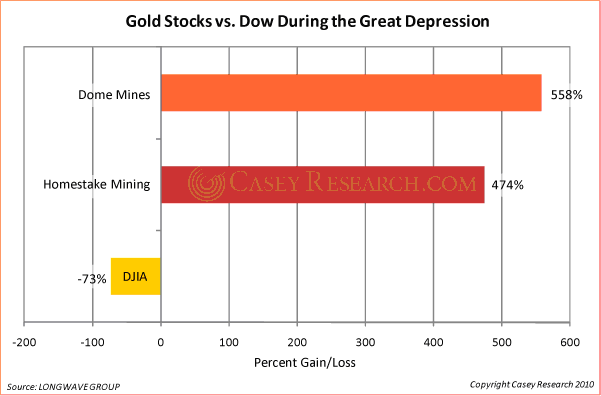 From 1929 until January 1933, the stock of Homestake Mining, then the largest Gold Mining producer in the US, rose 474%. Dome Mines, the largest Canadian producer, advanced 558%.

At the same time, the DJIA lost 73% of its value. And the chart doesn't show that you could have bought both stocks at half their 1929 price five years earlier, which would have led to gains of around 1,000%.

That's not all: both companies paid healthy and rising dividends as the depression wore on; Homestake's dividend went from $7 to $15 per share, and Dome's from $1 to $1.80.

Yes, volatility was high in the Gold Mining stocks throughout the deflation of the 1930s' Great Depression, with occasional wild price swings. But after the 1929 crash, much of the volatility was to the upside.

The bottom line is that the two largest gold producers – during a time of deflation, soup lines and falling standards of living – handed investors five and six times their money in four years.

What about gold itself? On April 5, 1933, President Roosevelt issued an executive order forcing delivery (i.e., confiscation) of gold owned by private US citizens to the government in exchange for compensation at the fixed price of $20.67 per ounce. And less than nine months later, he raised the Gold Price to $35, effectively diluting every Dollar 41% overnight and swindling everyone who had turned in his gold.

We don't know exactly what an untethered Gold Price would have done during the depression, but given its distinction in history as a store of value, we believe it would retain its purchasing power in a deflationary setting regardless of its nominal price. In other words, while the price of gold might not rise, or could even fall, your best protection is still gold.

But with all this said, the overriding concern today isn't deflation. Yes, economic growth will likely be flat for years, and many Americans will see some hard times ahead. But deflation won't win; in a fiat money system, any deflation will be met with an inflationary overreaction (as we've seen). And the worse the deflation, the more extreme the overreaction will be.

In fact, I think there's another round of money printing before this year is over. And sooner or later, that extra money is going to dilute every Dollar you own, giving us an inflationary hit as bad as the deflationary one we got during the Great Depression.

It's for this reason that I continue to urge you to own physical gold, in your possession and under your control, given its reliability as a store of value in both inflationary and deflationary environments. If you don't have a meaningful portion of your investments in physical gold, I think you're playing with fire. And those who play with fire eventually get burnt.

Get the safest gold at the lowest prices by using world No.1 BullionVault today...