END_OF_DOCUMENT_TOKEN_TO_BE_REPLACED

Gold investors wanting coins and small bars might be surprised if another "crisis" hits the markets...

Click or call, and you can quickly and conveniently own a Gold Coin or small bar to keep at home. But if global concerns cause another panic – or the Dollar breaks down – you could find yourself standing in a line at the local coin shop or getting a busy signal from a larger coin dealer.

Simply, for reasons I'll discuss here, you may find it very difficult to buy physical gold when that time comes.

It's happened before. Though there were no precious metal ETFs in 1980, the demand for physical gold was so great that you literally had to wait in line at a coin shop to buy, with plenty of occasions when you would have been turned away due to lack of inventory. And you'll recall we saw serious shortages, unexpected delays, and soaring premiums for retail investment products in late 2008.

Given the fragile state of global affairs and the waiting-in-the-wings crisis for the US Dollar, I'll be surprised if we don't see another panic into physical gold. And the question is, will there be enough metal to go around when the public – 95% of which own none – wakes up and wants to buy it?

Contrary to some claims, it isn't because we're about to run out of supply. While global mine production peaked in 1999 at 82.1 million ounces and has trended down since, take a look at the second largest source of supply – scrap. As you would expect, bad economic times and the surge in Gold Prices have triggered an increase in supplies from that source. 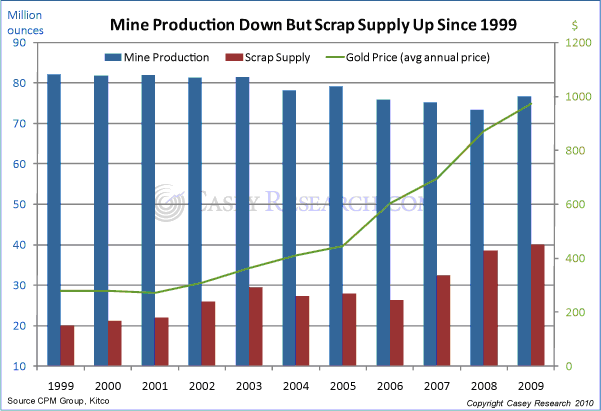 In fact, since 1999, as the price of gold climbed, the scrap supply nearly doubled. (Scrap comes mostly from jewelry, 75% of which derives from India, East/Southeast Asia, and the Middle East.)

So what's the problem?

First, you'd think a higher price would lead to rising mine production – but that's not happening. From 1999 through 2009, the average annual Gold Price rose 248%, yet gold production fell 6.6%.

This means that as gold continues higher, we cannot count on miners producing more yellow metal for us to buy. This concern will become increasingly obvious as more buyers enter the market.

Second, although scrap has more than supplemented the fall in mine production, as I'll show you in a moment, it's still not enough to fully satisfy current demand, let alone any increase in buying.

Meanwhile, the third major source of gold supply is reversing trend. Until last year, central banks around the world had been selling gold, adding a reliable tributary to the flow of metal year after year. This has stopped. As recently as 2007, 17 million ounces came to market from central banks; last year they acquired 7 million ounces. The era of central banks as large net gold sellers has likely ended.

The conclusion we can draw from these signals is clear: known gold supply conduits will not deliver any significant new supply in the future. This will have serious repercussions. While it's certainly bullish for the price, I think many investors have overlooked a critical angle:

If more and more people want to Buy Gold and the supply doesn't increase, what happens to your ability to get it? You can't turn a profit if you can't own it. Realistically, though, how much more demand can we expect?

One way to estimate this is to compare today's percentage of global assets in gold to the last great bull market... 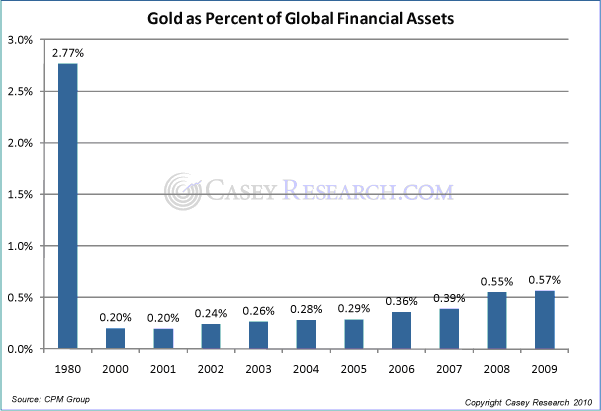 While gold's share of the global financial landscape has grown since 2001, a whopping 385% leap is needed to equal its 1980 peak.

Certainly some of that percentage could result from a decrease in the value of other assets. For example, residential and commercial real estate values will continue to fall as bad loans are unwound, and stock markets will adjust lower as global economies slow from cutbacks in government spending. But the gap is so enormous that investment in gold could easily increase significantly before this bull market is over.

Another way to measure potential future demand for Gold Investment is to look at today's bar and coin demand compared to the last bull market. The following chart first looks at what portion investment in gold comprises of the total uses for gold (i.e., including jewelry and industrial uses). Then we look at the percentage coin buying represents today vs. the peak in 1979. The point is to see if we've already reached high investment levels in gold similar to the last bull market peak – or if there's room for more. 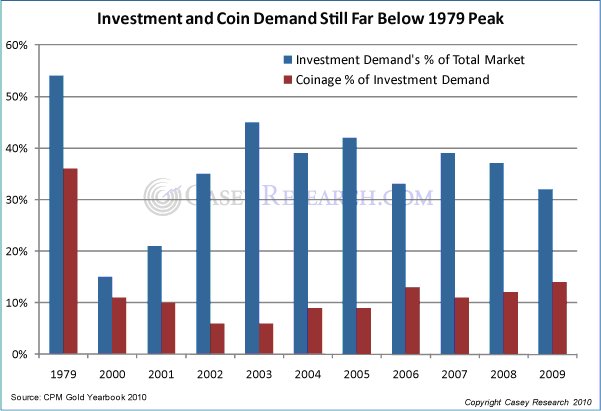 When Gold Investment demand – whether for physical metal or bank buying etc – peaked in 1979, it represented 54% of all uses for gold that year, a far cry from last year's 32%.

Of course, this is just arithmetic; lower jewelry demand could make investment demand look bigger as a share of total demand. But this data makes clear that an increase in investors wanting more gold could rise dramatically.

The picture is more striking when we look at Gold Coin demand. Coin buyers represented 36% of all gold investments in 1979; today it's barely 14%. Coin demand would have to grow by 157% to match the last bull market peak. Yes, gold ETFs have and will continue to replace some of the demand for physical metal, but this shows there remains tremendous room for growth for investors wanting more Gold Coins.

Based on this data, I believe that despite the strong demand for gold investments we see today, it can go much, much higher in the coming years.

Here are some examples of coin demand straining current supply that you may find surprising...

While all this is bullish for the price of gold, it's alarming what it suggests might happen to the availability of physical gold.

So my question is this: if the Dollar is collapsing and gold is screaming to $5,000 an ounce, will you feel like you own enough?

Better get some now while you still can.

Quit paying retail and get into the deepest, safest and most cost-effective Gold Bullion market – the professional wholesale trade – using world No.1 BullionVault...