END_OF_DOCUMENT_TOKEN_TO_BE_REPLACED

GOLD PRICES slipped back Thursday lunchtime in London, trading $5 lower for the week so far against the US Dollar after new data said fewer US citizens claimed jobless benefits last week.
With energy prices extending yesterday's steep retreat from new all-time highs today, longer-term interest rates eased back from this week's multi-month and multi-year highs in the German and UK government debt markets.
But ahead of Friday's closely-watched US non-farm payrolls data, US Treasury yields edged higher, with the 10-year rate testing last week's 3-month highs near 1.55% per annum.
Gold had earlier risen to reclaim last weekend's price of $1760 per ounce, while the real interest rate implied by inflation-protected 10-year TIPS bonds edged down, falling to a 2-week low of minus 0.92% and suggesting that debt traders expect the underlying cost of living to rise faster.
Gold in recent years showed an increasingly strong negative relationship with inflation-adjusted bond yields, rising when real interest rates fell – and vice versa – but the relationship broke down as energy costs began to surge this spring.
With a perfectly negative relationship giving a reading of minus 1.00, the correlation of gold with 10-year TIPS yields today fell back below -0.88 on a rolling 22-day basis, the strongest negative relationship since late April.
Gold is now $20 per ounce lower since then. Ten-year TIP yields have fallen by 20 basis points, snapping the expected pattern.
Today's 1-month correlation gives an r-squared of nearly 75%. That compares with a typical reading of 42% across the 5 years ending New Year 2020.
Since January however, gold's correlation with 10-year TIPS yields has shown a mean average reading of less than 19%. 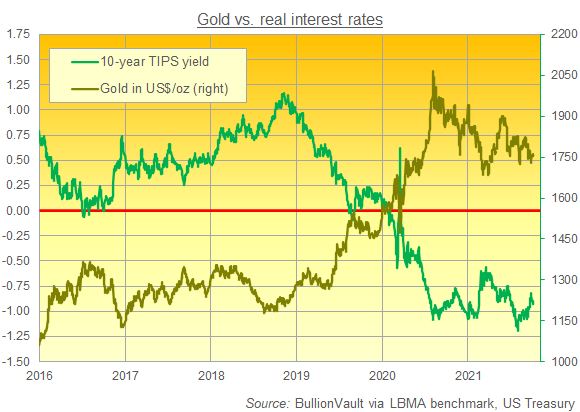 "Over the past 2 decades," writes strategist Nicky Shiels at gold bullion refiners and finance group MKS Pamp, "oil prices help explain a large amount of the variation in metals," showing a correlation of 89% for platinum, 79% for copper and 65% for silver prices.
"Gold vs. WTI [crude oil] has the weakest [of the metals'] correlation at only 44%, while there are negative correlations between US bond yields (-21% between 2-year yields and WTI) and the S&P500 (-7%), reaffirming that runaway energy prices will curtail any economic recovery."
New data yesterday said fresh orders at German factories sank nearly 8% in August from July, more than 3 times the drop forecast by analysts, while factory output dropped 4.0% - the worst plunge since the Covid Crisis shutdowns of spring 2020.
Eurozone retail sales also badly missed predictions, flat-lining from August last year.
But US jobs data said payrolls grew 1/3rd faster than expected in September, rising by 568,000 on the private-sector ADP estimate.
With last week's claims for US jobless benefits showing another solid fall today, Friday will bring the Bureau of Labor Statistics first estimate of last month's Non-Farm Payrolls.
"The [US Fed's] imminent reduction in asset purchases, and likely subsequent interest rate hikes, will almost certainly be a headwind for gold," says the latest monthly commentary from the mining industry's World Gold Council.
Both New Zealand and Poland yesterday raised their central-bank interest rates to 0.50% per annum, citing global inflation and hiking the cost of overnight borrowing for the first time since 2014 and 2012 respectively.
While analysts and pundits now expect the US central bank to start tapering its monthly $120 billion of additional QE from November, betting on the Fed then raising its key interest rate before June 2022 remains well below its level of April to June, according to derivative exchange the CME's FedWatch tool.
But for December next year, fewer than 1-in-4 bets now think the Fed's overnight rate will still be unchanged from its current ceiling of 0.25% per annum, half the level of 1 month ago.