END_OF_DOCUMENT_TOKEN_TO_BE_REPLACED

Stocks up, gold stocks down. And vice versa. Except when they're joined...
With RECOVERIES come questions, writes Jordan Roy-Byrne at TheDailyGold.com.
Will this last? Is this just setting up a bigger decline?
The current recovery in the gold mining stocks has been both strong and broad based. It has occurred at a time when the broader stock market seems vulnerable.
The stock market is up substantially since 2009. Yet, the most recent gains have resulted almost entirely from margin expansion rather than profit growth. Meanwhile, nominal GDP growth is the lowest ever (ex recessions). Gold stocks are up 16.8% in the last two weeks, while the S&P 500 has declined by 3.4%.
Should investors and speculators worry about the effect of a deeper decline or cyclical bear market on the gold mining sector? History says no.
The relationship between gold stocks and the broader stock market is difficult to pinpoint as its quite scattered. At times the two markets can trend together and in either direction. Sometimes when the stock market is falling, gold stocks can rise. The reverse can also happen as has been the case for the past two years.
The determinant is the current correlation between the two markets. If the two markets are trending together then they will continue to trend together following a major trend change.
Examples of this include the late 1920s to the mid 1930s and the mid 2000s to 2010. Yet if the two markets are negatively correlated (with the S&P 500 rising) then they will remain negatively correlated after the trend change. The following are important examples of that. 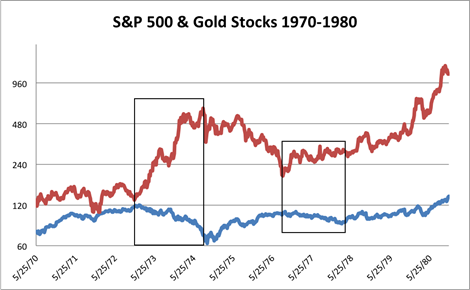 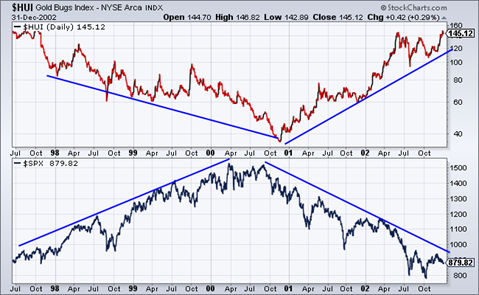 Many market observers forget the period of the late 1990s. The gold stocks were in a nasty bear market as the Nasdaq went parabolic. The S&P 500 continued to rise into 2000. Similar to 1973-1975, the gold stocks exploded higher despite a severe bear market in general equities. 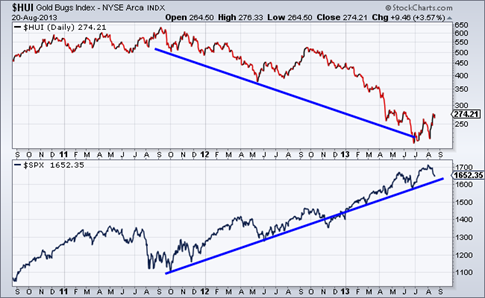 Finally, over the past two years the gold stocks declined nearly 70% while the S&P 500 advanced nearly 50%.
The stock market falls because of rising inflation or because of tighter credit or recessionary conditions. Rising inflation is usually a boon for metals prices but negative for general equities as it cuts into margins and hurts corporate profits. Currently corporate profit margins are at all-time highs while revenue growth is lacking.
With the S&P trading at over 18x trailing earnings, the market is not cheap and therefore is vulnerable to rising rates and rising inflation. Moreover, common sense tells us that if gold stocks correct while the stock market gains, its quite unrealistic to expect gold stocks to continue to decline if the stock market declines. At present, if the economy nears recession and the stock market falls (for whatever reason), policy makers will act and it should benefit precious metals.
In summation, if you are a gold stock investor there is no need to worry about the stock market. History shows that some of the best gains in gold stocks (1972-1974 and 2000-2002) occurred during a bear market in stocks. Also, history shows that given the current negative correlation between the two markets, we should expect gold stocks to perform well if the stock market is in the very early stages of a bear market.
Perhaps at somepoint the gold stocks will consolidate for several months when they are overbought or when the stock market is most vulnerable. That point is nowhere close. Stay bullish and look for continued gains in the coming weeks.