END_OF_DOCUMENT_TOKEN_TO_BE_REPLACED

With the US Dollar hitting fresh 2-decade highs on the currency market, gold prices bounced $5 off $1760 per ounce – the cheapest since mid-December – while silver prices rallied 30 cents from their first drop below $19 per ounce since July 2020.

Crude oil meantime extended Tuesday's 8.2% plunge for US benchmark WTI, falling beneath $100 per barrel, and copper extended its drop to 1/3rd below March's record high at the lowest since December 2020.

Longer-term interest rates also fell again as government bond prices rallied, as the 10-year US Treasury yield – a benchmark borrowing rate for business and banking – erased the last of June's spike to the highest since spring 2011, back down at 2.75% per annum.

That kept the so-called yield curve "inverted" again, with 2-year rates continued to trade above 10-year yields – something which has preceded each of the last 6 economic recessions in the US.

Even with gold now $300 per ounce below March's near-record high in US Dollar terms, "It's too early to buy gold yet," said Wayne Gordon, executive director of commodities and foreign exchange at Swiss bank UBS' Global Wealth Management division, to Bloomberg this morning.

"We weren't buyers" at the March highs, he went on, repeating UBS' end-year target of $1700 per ounce and saying that the rise in real interest rates – against which is typically negatively correlated – is coming from both a rise in bond yields and a drop in 'break-even' inflation rate forecasts from the US bond market.

"[That's] telling you either that the Fed's got [inflation] under control or we're looking at what is going to be a recessionary-type environment.

"Once the Fed starts to signal that they're looking just at much at growth as they are at inflation, then you would see gold prices starting to move higher." 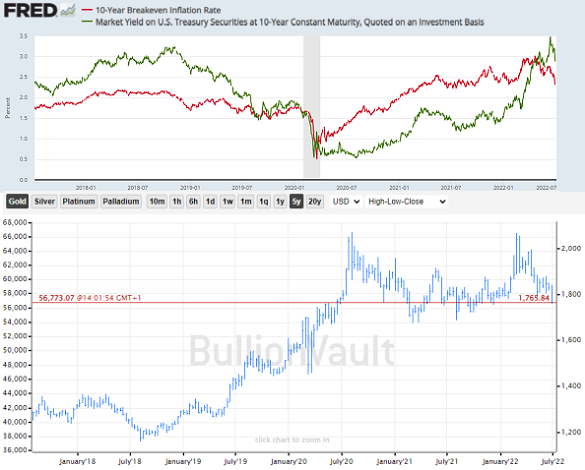 Investors as a group cut their position in giant gold-backed ETF the SPDR Gold Trust (NYSEArca: GLD) sharply on Tuesday, with the fund liquidating almost 10 tonnes of bullion to reach its smallest size since end-February at 1,032 tonnes after shrinking for 4 sessions in a row.

The smaller iShares gold product (NYSEArca: IAU) also shrank, while silver's largest such ETF – the iShares Silver Trust (NYSEArca: SLV) – saw its heaviest liquidation since the immediate aftermath of the #silversqueeze ramp of January 2021, shrinking by 2.3%.

Silver priced in the Dollar today dropped 7 cents below $19 per ounce, its cheapest in 2 years, as industrial metals extended their plunge.

That took the Gold/Silver Ratio of the 2 formerly monetary metals up towards 92 today, the dearest price for gold in terms of silver since mid-July 2020 at what was a 3-decade high when reached amid the Covid Crash in energy and industrial commodities of spring that year.

The Dollar's strength today saw gold prices for Euro investors continue to show an 8.2% gain for 2022 so far as the single currency dropped below $1.02 for the first time since late-2002.

The UK gold price in Pounds per ounce also held around 4-week lows as Sterling fell faster than bullion, trading at $1475 as the continuing personal and political scandals around Prime Minister Boris Johnson saw 15 ministers and 12 other officials resign from his Government.

"The economic outlook for the UK and globally has deteriorated materially," the Bank of England said yesterday in its latest Financial Stability Report, warning lenders to prepare for debt defaults even as it presses ahead with small rises to interest rates in the face of inflation running at 4-decade highs, as it is also doing across Europe and the US.