END_OF_DOCUMENT_TOKEN_TO_BE_REPLACED

US trade disputes weigh on silver, boost gold prices...
The GOLD/SILVER RATIO of precious metal prices has climbed above 90, signalling the highest price of gold relative to silver since the all-time peaks of more than a quarter-century ago.
Dividing the current gold price by the price of silver per ounce, the Gold/Silver Ratio offers a simple measure of how the 2 metals are performing against each other.
Holding around 12 to 1 in Europe during the Middle Ages, the Gold/Silver Ratio was formalized at 15.5 to 1 under France's bimetallic monetary standard of the 19th Century.
As silver was then demonetized in favor of a global Gold Standard, the ratio spiked above 30 at the start of the 20th Century. It has now averaged 58.4 since gold prices were also unpegged from the monetary system in 1971.
The Gold/Silver Ratio traded higher than its current level of 90 ounces of silver to 1 ounce of gold on just 237 days between 1990 and 1993. 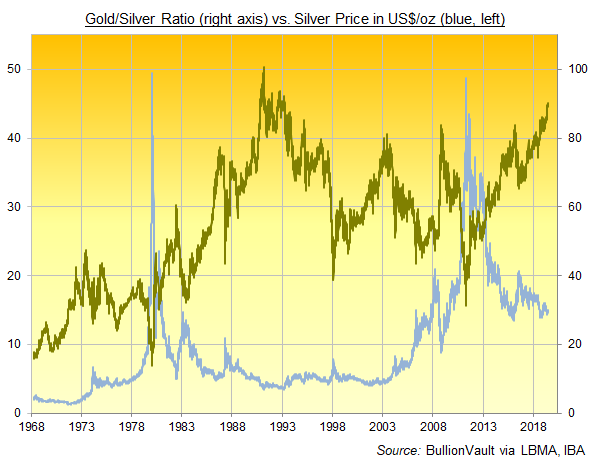 "To a large extent," says independent consultancy Metals Focus, this latest rise "reflects a lack of investor belief in silver's upside credentials...reaffirmed by the current price performance for silver, which appears lacklustre against a backdrop of rising (albeit modest) safe haven demand for precious metals."
Underpinning the gray metal's poor performance relative to gold, silver investment demand in the "all-important" US market remains weak, says Metals Focus, with the 42% year-on-year upturn in sales of new silver Eagle coins from the US Mint coming off "a historically weak total for January to May 2018."
Falling silver imports into India are also weighing on prices, Metals Focus notes, with the first 4 months of 2019 seeing a near 20% drop from early 2018's "historically high total". Analyzing this data "is further complicated" the consultancy says by the growing use of bonded warehouses, where buyers can hold metal already imported until they need it.
Global logistics specialists Brinks and Loomis have both opened free-trade zone warehouses in India, (Chennai in 2016 and Kandla in 2018 respectively). So it may be that "existing stocks have been partially depleted to satisfy" solid Indian demand so far in 2019, capping new imports and so weighing on global prices.
Most urgently, analysts agree that silver prices face a challenge from weakening global growth forecasts, because industrial use of silver account for almost 60% of annual demand against just 10% for gold.
"If circumstances suggest [financial] market instability," says the World Silver Survey 2019 from analysts Refinitiv, published in April for the US Silver Institute of miners and refiners, "then investors generally would favor gold over silver.
"A good example was during the 2008 global financial crisis, when the [gold/silver] ratio surged above 80. [The] high ratio in the early 1990s was in response to the Gulf War."
Silver's slump of the early 1990s was followed by heavy buying from legendary investor Warren Buffett. That pulled the Gold/Silver Ratio down from its historic peak of 100 to below 40 in 1998.
The metal also rallied sharply after the 2008 crisis, surging to near all-time highs at  $50 in spring 2011 and slashing the Gold/Silver Ratio from 84 to just 31.
This year's "ongoing, US-driven trade disputes have been a positive for the gold price, but a negative for silver," says the SFA consultancy, writing for German refining group Heraeus' weekly note.
"Economic and political uncertainties have increased and this has supported gold demand as a safe haven asset. [But] trade disruption is leading to slower global economic growth, which is a negative for silver."
Looking ahead, "The gold:silver ratio is likely to remain historically high over the short to medium term," says Metals Focus, because "the ratcheting up of US trade tensions, both with China and Mexico, has further encouraged professional investors to either cut their long exposure to silver, or to bet on further price weakness" using derivatives on the Comex exchange. 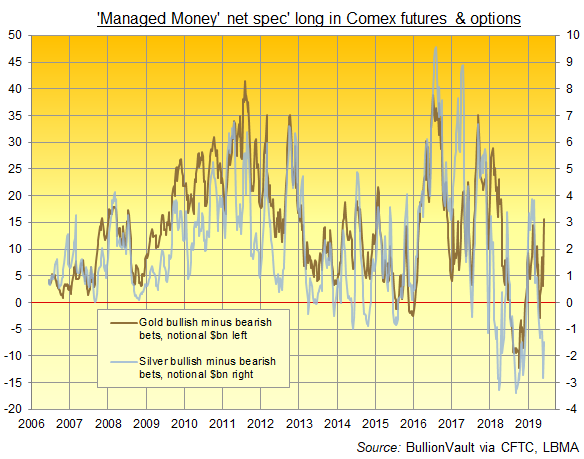 Breaching $15 last week and now holding above $14.60 per ounce, "Silver has broken out of its [2019] downtrend," says SFA for Heraeus, "which has caused some short covering" by bearish speculators in futures and options.
"If silver can overcome the drag from the trade disputes with some safe-haven buying then the price could outperform gold."
Should gold prices make substantial gains, agrees Metals Focus, "we could see the silver price start to gain from positive spillover effects...[and it may] benefit from being a far smaller, less liquid market, compared with gold."
Metals Focus expect silver to start outperforming gold late in 2019, "driving the gold:silver ratio lower" into 2020.