END_OF_DOCUMENT_TOKEN_TO_BE_REPLACED

The GOLD PRICE today set its highest Friday finish since the start of July in US Dollar terms in London and silver showed its best since mid-May as former bullion market-maker Deutsche Bank confirmed its return to precious metals' premier trading association 7 years after quitting amid a scandal over price-rigging which destroyed the century-old silver fixing benchmark process.
Gold bullion prices had earlier risen above $1800 for the 3rd time in a week, but pulled back $5 after new US data said inflation for product-makers in the world's largest economy slowed less than analysts forecast for November, denting expectations of a 'pivot' away from interest-rate rises in 2023 by the Federal Reserve.
Silver prices had earlier fixed above $23 per ounce for the first Friday in 7 months at noon's benchmarking auction, now managed by independent administrators IBA.
Applying to re-join the London Bullion Market Association "reflects the careful growth of our precious metals business in recent years, and growing client demand for our services," said German bank Deutsche in a statement to Bloomberg on Friday.
"[This] brings us into line with other banks that offer precious metal services."
Physical gold and silver services are drawing interest from other banks currently outside the market as well, according to private conversation around this year's LBMA conference in Lisbon and also at its annual dinner this week in London. 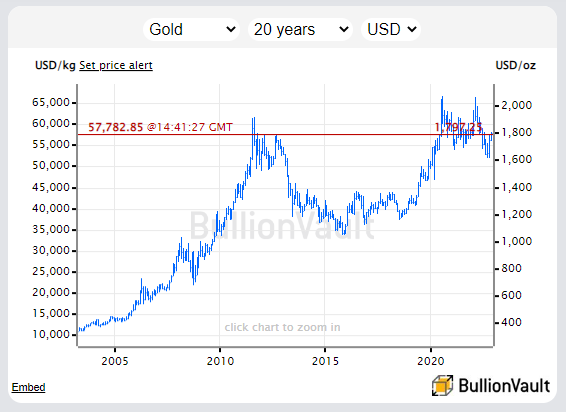 Today 39 of the 87 full LBMA members and market makers are banks.
That compares with 35 out of 64 back at the 2011 peak of $1920 in gold prices.
Deutsche Bank in 2014 quit the century-old daily gold and silver price fixing process – then subject to lawsuits and regulatory pressure over accusations of rigging, and since replaced by an independently administered auction – before resigning from the LBMA entirely.
Gold prices then bottomed at $1045 per ounce in December 2015 shortly after major non-bank dealer Mitsui also left the market, followed by North American giant Scotia Bank when prices softened once more in mid-2018.
Here in late 2022, and with gold prices matching last year's record-high annual high of $1800 per ounce so far this year, it would be good if more banks were to re-enter the market, said Bank for International Settlements' head of banking department Peter Zoellner in a public panel discussion at the LBMA's Lisbon conference in October, explaining that more players and financing options would help ensure and improve liquidity and tight pricing for other market participants.
Today's new US Producer Price data showed a 6.2% annual cost increase on the underlying 'core' PPI measure, excluding fuel and food, for November, down from 6.7% in October.
Inflation in services such as warehousing and trucking accelerated however, back to the highest since May at 6.7% per year.
Longer-term interest rates rallied after touching new multi-month lows in the bond market earlier this week, while US stock markets opened the day lower and European bourses also trimmed the week's previous gains.
Energy prices meantime led the commodity markets higher as US crude oil rallied from yesterday's 12-month low of $71 per barrel, down more than 40% from the 13-year high reached after Russia began its latest invasion of Ukraine in February.
The parliament in neighboring Nato and European Union-member Poland this week agreed that up to 200,000 people can be summoned for army training in 2023.