END_OF_DOCUMENT_TOKEN_TO_BE_REPLACED

Investment stress spurs record gold and silver holdings...
POLITICAL and financial turmoil is spurring a rebound in demand to buy gold and silver among Western investors, writes Adrian Ash at BullionVault.
That's overcoming thepressure on discretionary savings coming from double-digit inflation, and it's led by the number of first-time bullion buyers jumping sharply in the UK and Italy.
With London and Rome hit by financial chaos last month as markets took fright at a change of political leadership, the jump in new bullion investing grew the total quantity of both gold and silver – securely vaulted and insured for BullionVault's 100,000 users worldwide – to fresh records.
Now caring for $3.4 billion of securely vaulted and insured gold, silver, platinum and palladium (£3.0bn, €3.5bn, ¥493bn), BullionVault finds 9-in-10 of its users in Western Europe and North America.
Globally, the number of people worldwide opening and funding an account for the first time, ready to buy bullion, rose 23.7% in September from the previous 12-month average, reaching the highest monthly total since March – height of the Russia-Ukraine invasion crisis to date – after dipping to a 1-year low in August.
September's jump was led by the UK, where last month's count of first-time buyers rose 56.6% from the 12-month average, with Italy seeing a comparable rise of 41.6%.
The Milan stock market fell near 2-year lows last month as Rome's sovereign borrowing costs rose sharply compared to other Eurozone governments after a right-wing coalition led by 'post fascist' party the Brothers of Italy won the country's snap elections.
In the last week of September the British Pound meanwhile plunged to new all-time lows against the Dollar as national and household borrowing costs leapt following new finance minister Kwasi Kwarteng's unfunded tax-cutting and energy-bill-capping budget.
So new interest in physical bullion is currently mapping where political and financial stresses are greatest, led by the UK and Italy. Among self-directed investors, gold's appeal as the ultimate safe haven asset is also overcoming the cost of living's hit to discretionary savings, attracting new buyers even as volatile prices prompt some profit-taking among more active traders. 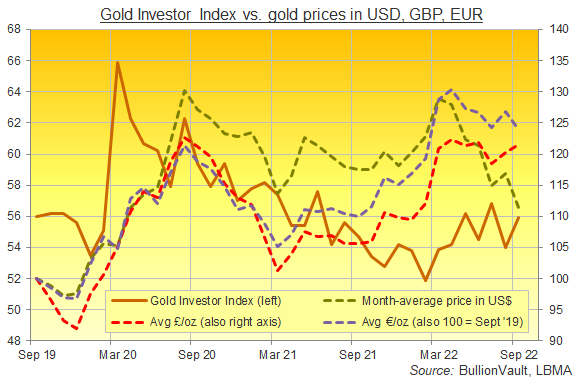 While gold isn't immune to the rise in global interest rates or the historic strength in the US Dollar, it continues to out-perform shares, bonds and crypto in 2022.
Even so, gold priced in the US Dollar fell 4.7% in September, hitting the lowest monthly average in 30 months beneath $1683 per ounce.
Gold in Euros also fell, dropping 2.3% to its lowest month-average since February at €1702 per ounce, a record high when first reached as Russia invaded Ukraine in early spring.
UK investors in contrast saw gold rise 1.1% towards its highest average price of 2022 so far, briefly spiking to re-touch its all-time spot-market high of £1580 as Sterling sank and coming within one per cent of August 2020's record £1500 monthly price.
The number of people using BullionVault to buy gold across September meanwhile rose 37.5% from August's figure, while the number of sellers rose by 20.0%.
Together that took the Gold Investor Index up by 1.9 points to 55.9, reversing 70% of August's drop from July's 13-month high.
Source: BullionVault, LBMA

The index would read 50.0 if the number of buyers exactly matched the number of sellers. It peaked at 65.9 as the Covid Crisis struck in March 2020.

Gold demand was also positive by weight, growing the total quantity of bullion vaulted and insured in each client's choice of London, New York, Singapore, Toronto or (most popular) Zurich by 50 kilograms to set its 3rd month-end record in a row at 47.8 tonnes – more gold bullion than most national central banks hold in reserve.
Source: BullionVault
As with gold, demand for silver on BullionVault was positive by weight in September, adding 8.0 tonnes to the total quantity vaulted and insured in each client's choice of London, Singapore, Toronto or (most popular) Zurich to set a new record for the 2nd month running at 1,261 tonnes.
The number of silver buyers on BullionVault rose 4.5% last month compared to August's figure but the number of sellers jumped by 45.6%, the steepest month-on-month rise in six.
Together, that meant the Silver Investor Index fell 0.9 points to match June's reading of 53.0, the lowest since March, when a rise in prices above $25 per ounce amid the start of the Ukraine crisis saw profit-taking pull client holdings down to an 11-month low by weight.
Silver prices fell 4.6% on a month-average basis in US Dollar terms in September but rose 6.0% across the month, reversing half of August's month-end $2 drop per ounce.
Silver has already jumped by a further $1.50 in October to reach 7-week highs above $20.50 per ounce.
Volatility in silver prices continues to outstrip gold, attracting strong two-way action among more active BullionVault users looking to buy the dips and take quick profits from this more industrially-useful precious metal – now forecast to enjoy record productive-use demand in 2022.
Attachments: