END_OF_DOCUMENT_TOKEN_TO_BE_REPLACED

Starting with India's new record imports...
GOLD's GREAT Love Trade appears to be alive and well, despite gold having a down year in 2021, writes Frank Holmes at US Global Investors.
India, the second largest consumer of the yellow metal after China, reported spending a record $55.7 billion on gold imports last year. That's more than double the amount from 2020 and surpasses the previous record high of $53.9 billion, set in 2011.
In volume terms, the South Asian country imported 1,050 tonnes of gold in 2021, the most in a decade, according to reporting by Reuters.
Gold has long been an incredibly important metal, both culturally and economically, to India and its people. It's considered auspicious to give gifts of gold coins and jewelry during certain holidays and weddings, and according to some estimates, Indian women own more gold than all the bullion combined in Fort Knox.
That gold imports were so high in 2021 is a good sign for global demand. For one, it suggests that couples who had to postpone weddings on account of Covid lockdowns now feel confident enough to move forward with their plans.
And two, it shows that the middle consumer class in India is cash-rich enough to absorb higher gold prices. The average annual price of the metal in 2021 was just under $1800 per ounce, the highest it's ever been.
In fact, if you look at its price going back to 2000, gold has been up 86% of the time on an average annual basis. 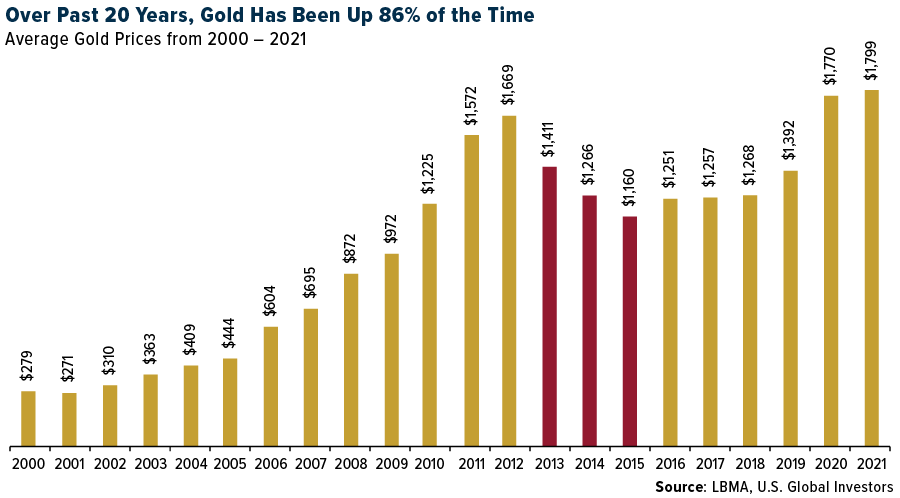 Some gold bears may have the perception that the precious metal's price is always struggling, but that couldn't be further from the truth.
If we go all the way back to 1971, when the US Dollar was taken off the gold standard, we find that the price of the metal has been positive far more often than it's been negative. Nearly 20% of the time, gold ended the year with an increase of more than 25%.
That's the second highest level of frequency after the -5% to 5% category, which occurred over a quarter of the time. In half of all the years from 1971 to 2021, gold ended the year higher by more than 5%. 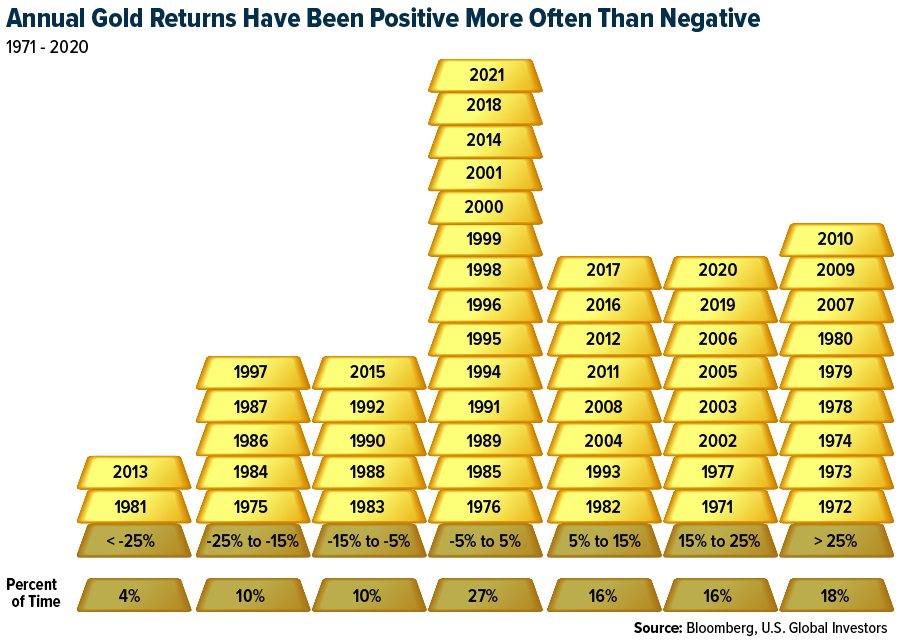 Investors seeking other reasons to add to their gold position may look to the asset's historically low volatility and strong liquidity.
According to the most recent report by the World Gold Council (WGC), gold is the third most liquid asset in the world following the S&P 500 and US Treasuries. On average, the precious metal trades more than $100 billion per day around the world, with about $60 billion of that in spot contracts, gold futures and bullion-backed ETFs.
And then there's volatility. When compared to other alternative investments, from Bitcoin to real estate investment trusts (REITs) to farmland, gold has the lowest annualized volatility of any asset except for commodities as a whole.

All told, these two qualities can help investors improve the risk-adjusted returns of their portfolios.
I've always recommended a 10% weighting in gold, with 5% in physical gold or jewelry, and 5% in gold mining stocks and ETFs. Make sure you rebalance at least once a year, if not more frequently.