END_OF_DOCUMENT_TOKEN_TO_BE_REPLACED

GOLD PRICES ticked higher in quiet London trade Friday, holding almost unchanged from last week's finish against most major currencies as global stock markets pushed up to new all-time highs despite No.2 economy China reporting its slowest annual GDP growth in 3 decades.
Although the fastest large-economy growth at 6.1% for 2019, China's official estimate comes at the very bottom of the Beijing regime's GDP target.
With only a week to go until the household demand peak of Chinese New Year, gold prices in Shanghai slipped ¥1 for the day to ¥344.85 per gram at China's official benchmarking auction, holding 3.5% below last week's spike near September's 7-year highs.
Today's price drop saw the premium for gold bullion landed in the metal's No.1 consumer country rather than the global trading hub of London slip to $6.35 per ounce, some $2.50 below the typical incentive for new imports and suggesting soft demand from jewelry manufacturers and investment product retailers.
"[Household] demand has been increasing," says consultancy Refinitiv GFMS' Samson Li in Hong Kong, "but I think it is more about seasonal demand picking up rather than a change in a trend."
"Demand should start to dry up after the New Year."
Prices in major Indian cities meantime rose above INR 39,990 per 10 grams today, a little higher from last Friday but down more than 3% from last week's new all-time high for domestic prices, which include 12.5% import duty – raised from 10% in last February's Budget – plus 3% sales tax. 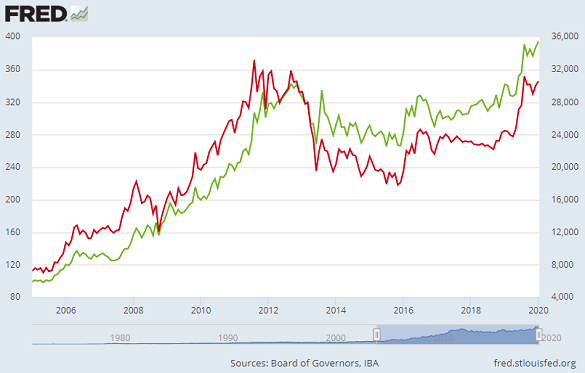 "[This] has made buying jewelry very costly, affecting consumer demand," says Anantha Padmanaban, chair of the All India Gem & Jewellery Domestic Council (GJC), calling on the BJP Government of Narendra Modi to cut import duty on gold to 6%, reduce credit-card commissions charged by banks from the current 1% level, and also cut the rate of Capital Gains Tax.
"The gold industry should be encouraged to operate transparently and come out of the shadows of a parallel economy," agrees Somasundaram PR of the mining-industry's World Gold Council, "with appropriate infrastructure and standards, underpinned by robust gold spot exchange, bullion banking, innovation and responsible business practices."
With India's GDP growth also slowing according to a new United Nations' estimate, 2019 also saw the "Return of gold financiers in India's organised lending market" according to a new report by accounting consultancy KPMG, forecasting that personal loans made against jewelry and other gold items will grow to $65bn by 2022, expanding faster than 13% per year.
"The 2018-19 fiscal year saw gold loan companies aggressively expanding their branch network across the northern and eastern states in the country," says the report.
"The emergency of the online and digital models in the gold loan space by non-bank financial companies and new-age fintech players that offer gold loans at the customers' doorstep have opened up an untapped market among digitally enabled customers."
Over in the United States, Thursday saw the giant SPDR Gold Trust (NYSEArca: GLD) expand for the second day running, growing the quantity of bullion needed to back its shares in issue by 5 tonnes for the week so far, more than twice the outflows seen from cheaper competitor gold ETF the iShares Gold Trust (NYSEArca: IAU).
Priced in Dollars, London bullion today held $4 below last week's finish of $1562 per ounce.
Silver was also lower from last Friday, down 5 cents at $18.05, but platinum prices held onto most of this week's jump, heading for the highest weekly finish since February 2017.