END_OF_DOCUMENT_TOKEN_TO_BE_REPLACED

GOLD PRICES in London wholesale market held unchanged for US Dollar and UK Pound investors on Wednesday but slipped to 1-week lows in Euro terms as world stock markets rallied for a 5th session running.
New data today put the 19-nation Eurozone's jobless rate down at 7.9%, a fresh 10-year low, while No.1 economy Germany reported a larger-than-expected surplus on its trade balance.
As the Euro ticked higher against the Dollar on the FX market, the price of large wholesale gold bars edged below €1120 per ounce – a 6-month high for French, German and Italian investors when first reached over Christmas, and 1.5% below New Year 2019's 19-month peak.
Priced in the US Dollar gold bullion held above $1280 per ounce, some 1.5% below last week's new 7-month high.
"Our FX view is for a stronger USD [in 2019], which may present the greatest threat to gold and will at the least limit rallies," says bullion-bank HSBC analyst James Steel.
"[But] further short-covering and builds in [speculative] longs are likely," he goes on, predicting a 2019 average gold price of $1314 per ounce – some $20 above Steel's previous forecast. 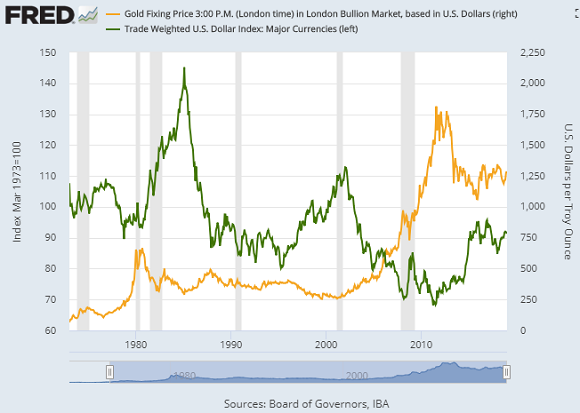 "The consensus got it wrong all through 2018, calling for Dollar weakness," agrees HSBC's head of FX strategy Daragh Maher.
"Now they have started 2019 with the same old record playing," he says, forecasting that the US currency will push the Euro down to $1.10 this year.
US President Donald Trump held his first primetime evening TV address on Tuesday to blame Democrat politicians for the partial shutdown of government services because they won't agree to funding his $5.6 billion Mexico wall plans.
Washington is already on track for its first $1 trillion annual deficit between revenue and spending since the 4-year run ending 2012, according to data from the Congressional Budget Office.
Last year's US trade deficit in goods and services meantime matched 2017's nine-record in just the first 10 months.
"The wall will always be paid for indirectly by the great new trade deal we have made with Mexico," Trump told his fellow Americans.
Bloomberg today claims that Trump wants to cut a deal with Beijing in US-China trade talks – which concluded this morning – because he believes the US stock market will then rally from end-2018's plunge.
"Although equity market weakness and a recent Fed shift toward a more dovish and pragmatic stance has provided a short-covering boost [in gold],"
"A US-China trade deal will take time to negotiate and Chinese stimulus is unlikely to take hold until later in 2019," says a note from Canada's TD Securities brokerage.
So for the price of gold bullion bars, "We expect choppy range-bound trading in the near-term, as the greenback remains relatively firm, Fed monetary policy continues to be ambiguous and China/emerging-market economic and currency risks continue to manifest."
Here in the UK meantime, anti-Brexit lawmakers began what they called a series of moves to prevent Britain leaving the European Union with "no deal" in place on Brexit Day, 29 March, defeating the Government in a vote overnight.
Jean-Marc Puissesseau, head of key French port Calais, told the BBC this morning that he has "preparing for a no-deal Brexit for 12 months" and will be ready to cope with no changes when Britain leaves the EU on 29 March.
Saying he is "shocked" by the "disrespectful" decision of UK transport minister Chris Grayling to spend £100m on diverting ferry services to alternative routes from Dover-Calais,  "We will not check [any] truck more than we are doing today," Puissesseau said – contradicting his own warnings about how delays resulting from Britain's exit from the EU will cause rotting food and long tailbacks.
The UK gold price in Pounds per ounce today edged back up towards £1010 per ounce, some 2.1% below start-2019's sixteen-month high.