END_OF_DOCUMENT_TOKEN_TO_BE_REPLACED

Consensus sees 2022 gold at $1800 for 3rd year running...
The LBMA's annual gold price forecast survey is out for 2022, writes Adrian Ash at BullionVault.
What it says about individual views and analysis from professional forecasters, you can read in full in the survey here.
But while opinions make markets, the reverse also applies. So what does the new survey reveal about sentiment across the global gold bullion market this New Year? 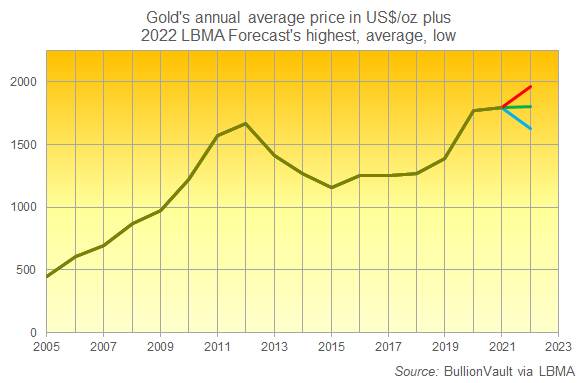 Also gathering forecasts for silver, platinum and palladium prices, the LBMA competition will be won by whichever precious-metals analyst, entering the survey, just predicted what the daily gold price benchmark in London will have averaged when the year ends.
Last year's winner in gold, Caroline Bain of consultancy Capital Economics, gave one of the more bearish forecasts for 2021. Or rather, one of the less bullish.
Where Bain had predicted a 2.0% rise in the annual average gold price from 2020's new record high, the average forecast across all 32 entries projected an 11.2% rise.
That pretty much repeated the LBMA survey's average forecast gain for 2020. Those 30 entrants had, on average, predicted an 11.9% rise.
Driven by Covid however, plus the ensuing lockdowns, QE money creation, furlough support, stimmy checks and zero Fed rates, gold prices jumped 27.2% across the first year of the plague.
That was the steepest annual average price rise since 2011. It also made for the sharpest percentage miss of gold's upside by the LBMA's forecast survey in the decade-and-a-half of data compiled by BullionVault here: 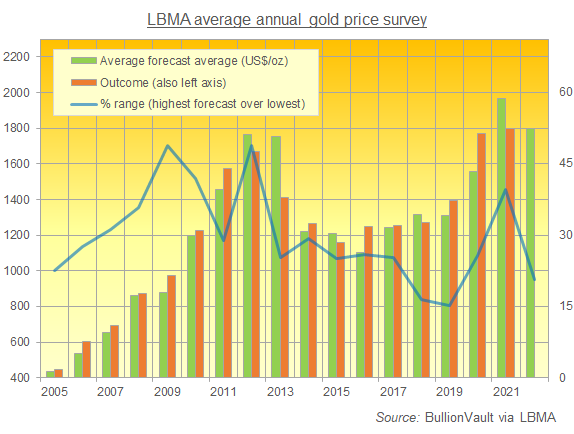 Maybe in response, and as you can see from our chart, analysts as a group then got over-excited about gold's prospects for 2021.
Their average forecast overshot the outcome by 9.4 percentage points, the biggest miss of the downside since 2013, the year of gold's big crash from its peaks at the end of the global financial crisis.
During that turmoil, the average LBMA forecast had trailed behind  gold's bull market for 7 years running, lagging the outcome with a cumulative 'miss' of $365 between 2005 and 2011.
Forecasters on average then got way too bullish at the very top of 2012, before repeating that forecast almost exactly for 2013 – trimmed by just $10 per ounce – only to get whacked by gold's steepest price crash since 1981, overshooting the slump by a massive $340.
Racing to catch up, the forecast's new bearishness then overshot gold's actual decline in 2014 by $50...
...only to miss the market by $50 again, but in the other direction, as gold continued to fall in 2015.
That proved the nadir for gold's post-crisis retreat, helping put the 2016 forecast average way behind the market once more.
Whether or not any individual analysts now feel chastened by the consensus outlook's big misses of 2020 and 2021, this year's average forecast is more cautious. The most cautious since at least 2005 in fact, predicting a change of just 0.1% from last year's actual average and pointing to gold prices going pretty much nowhere from the levels of 2020 and 2021, coming once more within a couple of dollars of $1800.
Caught in the headlights? More stuck in the middle, says the LBMA's own inhouse analysis.

"We asked analysts in this year's survey to identify their top three drivers for the gold price in 2022.
"A third of the total votes revolved around the [US] Fed's monetary policy, with projected interest rate rises cited as a negative for the [Dollar] gold price. Concerns about inflation accounted for around a quarter of the votes, with equity market performance regarded as the third key driver."

Because gold pays no interest, says analysis from several forecasters predicting close to the 2022 average outlook, higher rates from the Fed will raise the opportunity cost of holding bullion.
But rising inflation plus a weaker stock market will support demand and therefore prices, the consensus also agrees.
The curve ball to this flat-line gold price chart forecast? Says the LBMA Survey:

"Surprisingly, Covid-19 and geopolitical tensions were not particularly regarded as key influences for the gold price in 2022."

That consensus masks individual analysis of course, with 10 entrants using the word "geopolitics" or "geopolitical" in their comments.
Yet the word "conflict" appears only once (FastMarkets' William Adams, a bull at $1895) and nobody uses the word "war" despite the sabre-rattling between Nato and Moscow over Ukraine or China and virtually everyone else over Taiwan.
With 'fat tail' risks pretty much set aside, and with the average outlook so tight around last year's outcome, you might expect to find this year's LBMA entrants all crowding around that mean prediction near $1800.
But digging into the data, this isn't 2019 – a year of such remarkable consensus among gold analysts that their employers' compliance departments must have thanked God they weren't allowed anywhere near clients or the trading floor.
Four-in-5 of the 30 entrants in 2019 forecast a gold price that came within 2% of the overall forecast's average. Very nearly half of them came within 1%, and the gap between the most bullish forecast and the biggest bear was just 15%, the tightest range in at least 15 years.
This year's bull-bear range is wider at 20%, but tighter than the last 2 years' spread. By number meantime, 9 entrants come within 2% of the average (a repeat of 2021, albeit with 4 fewer players at 28 in 2022) and just 4 within 1% (the least since 2017, although that year had just 25 entrants).
So there's no big crowd, in other words, gathered around the $1801 average. But whille bulls and bears may grab the headlines, the balance between them is what drives prices higher or lower, and consensus is where investors should look for what the market is thinking – in sum – as well as for what might change it.
To read the views of the small group huddled together this year around the $1801 average, see the analysis in the LBMA gold forecast survey from Mururi Pearson (Afriforesight), Rohit Savant (CPM Group), Nikos Kavalis (Metals Focus) and – closest of all – Nicky Shiels (MKS Pamp).
None of that, of course, will tell you whether 2022's average call will come good, nor which individual analyst will prove closest to the outcome decided at end-December.
But in sum, it does say that the gold market's professional analysts – averaged as a group – really do see bullion prices holding around current levels this year.
Inflation versus the Fed, with gold stuck in the middle. Unless one of them wins out.