END_OF_DOCUMENT_TOKEN_TO_BE_REPLACED

GOLD PRICE gains of 4.5% overnight Tuesday were all erased by the close of London trade yesterday, with a $20 rebound then fading on Thursday as world stock markets extended their rally following Donald Trump's surprise victory in the US presidential election.
Japan's Topix index closed 5.8% higher, reversing the previous day's losses, and Eurozone equities rose another 0.5% as the start of Thursday's US trading approached.
Major government bond prices, in contrast, continued to fall amid analyst talk of Trump's infrastructure and spending plans – as well as inflation – driving 10-year US bond yields above 2.00% for the first time since January.
Gold prices were then trading at $1114, some 12% below this week's low-point near $1269 per ounce.
"[Because] the 2011-2016 downtrend has held," says the latest weekly gold-price analysis from Karen Jones at German financial services giant Commerzbank, "our longer-term bias remains negative. 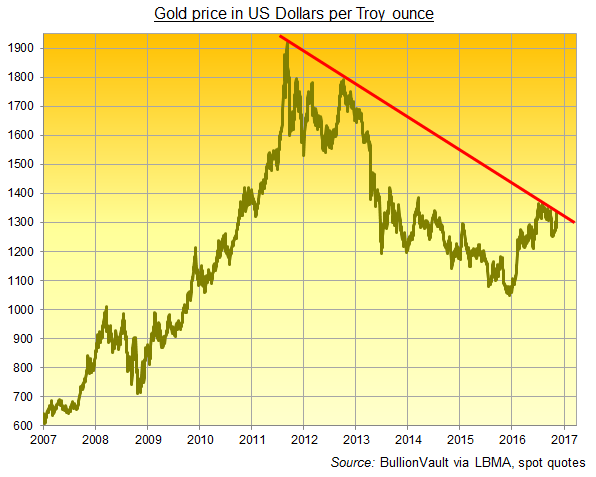 "A weekly close [in the gold price] above $1339 is required for a credible break of the downtrend [but] in order to negate current upside pressure on the market we will need to go sub-$1269" – the low hit just before Trump's victory began to become clear overnight Tuesday.
Gold prices touched $1270 late yesterday as the market retraced its entire 4.5% jump, before rallying $20 per ounce in Thursday's Asian and early London trade.
"We believe that Donald Trump’s win is positive for gold," says the weekly note from specialist analysts Metals Focus, "[but] it is unlikely to be a game-changer.
Repeating its current $1350 forecast for gold between now and New Year – with a high of $1460 predicted for 2017 – "The uncertainty the new president-elect introduces to domestic, foreign and trade policy of the world’s largest economy and military power should continue to encourage interest in safe haven assets," says Metals Focus.
"If these culminate in renewed turmoil in global markets...the Fed would be forced to respond [perhaps with a] new loosening cycle...and/or a new round of quantitative easing."
"Within the stock market," CNBC quotes Thailand-based investment manager and author Marc Faber, " anything that is commodity-related will do well" as a result of Trump's stated policies – now posted on an offical dotgov US website.
"The obvious trade is to own Russian and Kazakhstan assets," says Faber, "for the simple reason that Mr.Trump has a more benign view of the world and respects the perspective of foreign leaders."
Within the United States however, and "with the debt ceiling looming again," says a precious metals note from strategist Tom Kendall at bullion clearer and market-maker ICBC Standard Bank, "we think there is very little that President-elect Trump will be able to do to inject adrenaline into the economy in 2017.
"In contrast, he certainly will be able to influence business investment decisions and trade policy...more likely negative than positive.
"So there's a risk that [rather than raising rates] the Fed will have to grapple with both stronger headwinds to growth and rising longer-term inflation expectations.
"That kind of scenario would certainly be positive for gold."
"For investors willing to accept the incremental volatility," adds asset management giant Blackrock's head of asset allocation, Russ Koesterich, "gold is potentially the more leveraged play under a scenario where inflation expectations rise faster than nominal [interest] rates.
"And, as we've seen, gold also comes in handy when unexpected things happen."
Investor demand for shares in giant gold ETF the SPDR Gold Trust (NYSEArca:GLD) yesterday saw another 5.3 tonnes of bullion needed to back the fund.
The third daily inflow of the last 2 weeks, that took the trust's total holdings to 955 tonnes – a 3-year high when first reached in the immediate aftermath of the UK's shock Brexit referendum result.