END_OF_DOCUMENT_TOKEN_TO_BE_REPLACED

Dividends 'dreadful', investment lacking as output peaks...
GOLD MINE output worldwide has most likely peaked according to leading analysts, with a move to pay down debt since bullion prices peaked a half-decade ago diverting money from both exploration spending and dividend payments to mining-stock investors.
Contrasting the major gold-mining stocks with more diversified resource producers such as Rio Tinto (LON:RIO), "a much higher gold price is required before dividends can recover," say specialist analysts Metals Focus, "and dividends will be required before share prices can realise a meaningful and sustained recovery."
Often promoted as offering 'leverage' to the gold price, mining equities have badly underperformed the bullion price over recent years.
From this point a decade ago, when gold itself first rose above $1000 per ounce amid the near-failure and bail-out of US investment bank Bear Stearns, top 3 global gold-mining stocks Barrick (NYSE:ABX), Newmont (NYSE:NEM) and Goldcorp (NYSE:GG) are now trading 70%, 20% and 65% lower respectively. 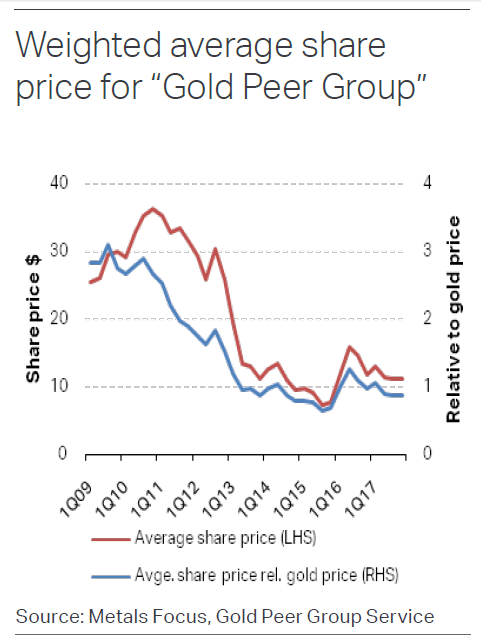 Faced with a steep drop in global gold prices from the peak of 2010-2012, the major gold miners "cut back on exploration and capital spend," says Metals Focus, "both of which are required to maintain longer-term production."
"From 2011 to 2015 the focus was really on balance-sheet consolidation," agrees Vince Madden-Scott, head of gold research at resource-sector consultants Wood Mackenzie, "and that's really coming home to roost now.
"These companies are struggling to replace their ore sources. Our data is showing a significant and sustained contraction in global gold supply from 2018 onwards...[caused by] a  number of years of under-spending on exploration."
Metals Focus says 2017 global gold mining output matched the prior year's all-time record, but it "post[ed] the first annual drop in almost ten years" according to the latest update from analysts Thomson Reuters GFMS, published in late-January.
"Environmental concerns and a crackdown on illegal mining were the driving force behind the drop," GFMS says, with stricter regulations and forced consolidation in No.1 nation China cutting output by 6% from 2016 on data published by Beijing's official China Gold Association.
"Reserve attrition is an underlying threat," said Madden-Scott of Wood Mackenzie in a presentation to the recent PDAC conference of miners and explorers in Toronto – attended by a record 25,000 people.
"Gold miners cut exploration in a time of crisis to preserve margins," he went on, highlighting how the pipeline of new projects contains few large deposits.
Former No.1 nation South Africa and current No.2 Australia meantime face "structural decline," says MiningWeekly, "as their mines become deeper, more remote, with lower grades and greater operational complexities."
"Gold equities have severely underperformed the gold price," noted Marcelo Kim, a partner at hedge fund group Paulson & Co, in a presentation at the Denver Gold Forum last fall which journalists cast as a "blistering attack" on the world's top gold mining companies.
"Analysis of 13 largest publicly-listed gold companies shows total shareholder returns have been dreadful," Kim went on, contrasting senior management salaries with steep losses for equity investors.
Proposing a new "coalition" of gold-mining equity investors, looking for a "real voice" on corporate boards to "demand accountability", Kim said that currently "CEOs and boards own little or no stock [but] reload on options even as the stock price declines...getting rich while shareholders lose money."
Kim's comments echoed a 2014 presentation by equity research firm Pollitt & Co, also given in Denver, which noted how "The brightest investors in the gold business [have been] in aggregate outperformed by a hunk of metal and that is before deducting management fees."
Data from Metals Focus show net debt amongst the major gold miners rising steeply as bullion prices peaked in 2011 to 2013, ballooning 5-fold as mergers and acquisition spending leapt to record highs but quarterly payments to shareholders rose by only two-thirds.
Dividends then sank by three-quarters over the following four years, while net debt was cut in half.
Led by gold, exploration budgets for non-ferrous metals meantime sank by two-thirds according to figures from rating agency S&P's Metals & Mining division
"Things are [now however] looking up for the exploration sector," says S&P's report on 2017 budgets, with spending in looking for non-ferrous metals showing "the first annual increase after four consecutive years of declining investment.
"Gold led the way" in 2017 says S&P, with global allocations on exploration for the metal 22% higher from the previous year at $4 billion.