END_OF_DOCUMENT_TOKEN_TO_BE_REPLACED

The Asian financial crisis had spread like a virus. Thailand, Malaysia, Singapore and other Southeast Asian countries were all affected, inciting fears of a global economic meltdown if the crisis couldn't be contained.

Before 1997, South Korea had been held up as a textbook example of economic reversal and resilience.

Once a poor colony, the country underwent an unbelievably rapid transformation in the second half of the 20th century, propelled by smart policy reforms and heavy investment in education. Many called it the "Miracle on the Han River." By the end of the century, Korea had grown to become the world's 11th largest economy. Residents had the incomes to enjoy comfortable, "Western" lifestyles.

But in the summer of '97, the bug arrived in Seoul. Businesses began to fail. Left with nonperforming loans, banks collapsed, while others discontinued fresh lending. The won was in freefall. Liquidity dried up. Foreign investors yanked nearly $18 billion out of the country. Hundreds of thousands lost their jobs.

Korea's only recourse was to seek help from the International Monetary Fund (IMF), and in December, the lender approved a gargantuan $58 billion bailout package, the largest in history. The deal required Korea to liberalize trade and its capital accounts, reform its labor market, restructure corporate governance and more.

A new crisis emerged, then, which native Koreans still refer to as the "IMF Crisis".

The government wasted no time in raising the funds to pay back the loan, and on January 5, 1998, a national campaign was launched that today stands as one of the most moving shows of patriotism and self-sacrifice the world has ever known. 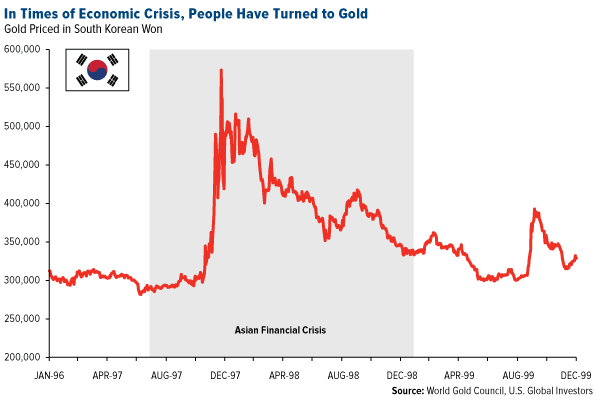 At the time, it was estimated that South Korean households held roughly $20 billion in gold, in the form of necklaces, coins, bars, trinkets, statuettes, medals, pendants, military insignias and more. Most of it carried strong personal and familial significance, far beyond its monetary value.

Gold, after all, has typically played an auspicious role in Koreans' personal milestones. Many families celebrate an infant's first birthday in a tradition known as doljanchi, during which gifts of 24-karat gold rings are customary. Gold jewelry and watches are routinely given to newlyweds, as we also see in India, Turkey and elsewhere. Companies often award retirees with gold keychains.

This is the Love Trade which I speak so frequently about, responsible for driving a huge percentage of the demand and price of gold. In many parts of the world, gold jewelry is more than just beautiful ornamentation – it's also prized as an important form of financial security.

Koreans know this all too well. Ninety years earlier, in 1907, the Korean Empire owed Japan 13 million won, equivalent to an entire year's budget. To help pay it off, men quit smoking while women sold their cherished wedding jewelry.

Nearly 3.5 million people, almost a quarter of the entire country's population, voluntarily participated in the campaign. Queues of people – young and old, rich and poor – stretched for blocks outside special donation points, all of them answering the call to help their country. Yellow ribbons proclaiming "Let's overcome the foreign currency crisis by collecting gold" could be found pinned to people's shirts.

Big-name Korean corporations, from Samsung to Hyundai to Daewoo, lent their marketing strength to help spread the word, as did celebrities. Lee Jong-beom, a hot young baseball star, drew national attention when he brought in 31.5 ounces of gold, valued at over $9,000, all in the form of trophies and medals he had acquired over his five-year career.

On average, each person donated 65 grams of the yellow metal, or a little over $640 based on prices at the time.

In as little as two months, 226 metric tonnes, valued at $2.2 billion, were collected, every last scrap of which was melted into ingots and promptly delivered to the IMF.

Although this amount was just a drop in the bucket, the gold collecting campaign served as an important rallying point early on in South Korea's effort to tackle its debt, not to mention the fact that it demonstrated the deep patriotism and unity of its people. The Love Trade helped the country pay back the $58 billion loan in full by August 2001 – nearly three years ahead of schedule.

Korea's is arguably the best known example of gold recycling, which the World Gold Council defines as gold that is "sold for cash by consumers or other supply-chain players," including countries.

Of course, it's not the only example.

Although central banks as a whole have been net buyers of the precious metal since 2010, Venezuela is in liquidation mode, having sold off most of its gold reserves since March 2015 in an effort to offset low oil prices and to pay down debts. Good thing the socialist country had gold to fall back on, as bolivar notes are now so worthless, some Venezuelans have found that it's cheaper to use the bills as napkins than to buy actual napkins.

Because the precious metal is virtually indestructible, all gold ever mined is still available in some form or another, making recycling an important part of supply. The rate of recycling has tended to ramp up during times of economic crises, or when gold prices in a country's currency accelerate. Look at how recycling in the US has correlated to prices. 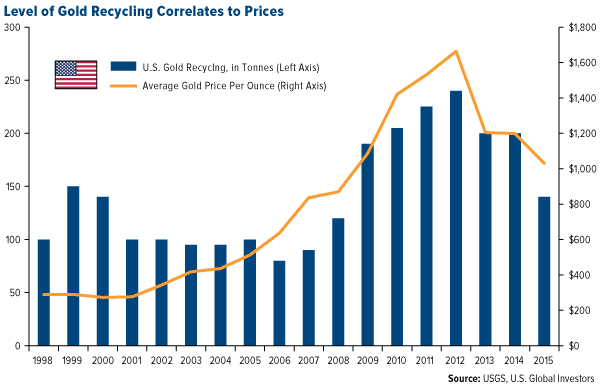 With gold having posted its best first half of the year since 1974 and on track for its best full year since 2010, more people are taking their old coins and rings to the pawn shop. In the first six months, the rate of recycling was up 10% compared to the same period in 2015, as Bloomberg reports.