END_OF_DOCUMENT_TOKEN_TO_BE_REPLACED

Gold has gained for the last 11 years. Is it too late now to make a Gold Investment...?

THERE ARE a lot of reasons we at Casey Research think gold is still a good investment, writes Casey's Big Gold editor Jeff Clark.

From inflation fears and sovereign debt concerns to deeper, systemic economic problems. But let's be honest: It's been rising for over 11 years now, and only the imprudent would fail to think about when the run might end.

Is it time to start eyeing the exit? In a word, no. Here's why.

There's one indicator that clearly signals we're still in the bull market – and further, that we can expect prices to continue to rise. That indicator is negative real interest rates.

This calculation is the same regardless of how high either rate may be: a 15% interest rate and 13% inflation still nets you 2%. This is why high interest rates are not necessarily negative for gold; it's the real rate that impacts what gold will ultimately do. 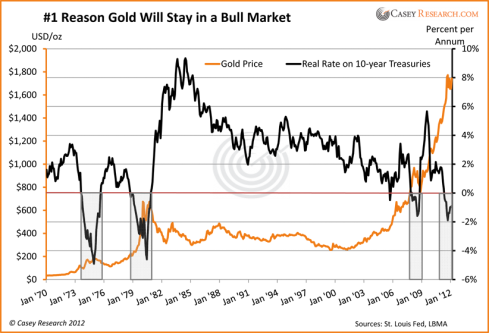 Gold climbs when real interest rates are low or falling, while high or rising real rates negatively impact it. This pattern was true in the 1970s and it's true today.

A closer study of this chart tells us there's actually a critical number for real rates that seem to have the most impact on gold. Take a look at how gold performs when real rates are at 2% or below. 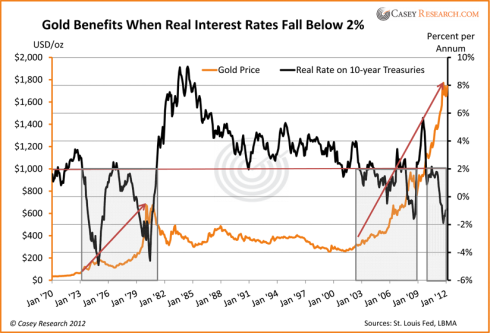 The reason for this phenomenon is straightforward. When real interest rates are at or below zero, cash or debt instruments (like bonds) cease being effective because the return is lower than inflation. In these cases, the investment is actually losing purchasing power – regardless of what the investment pays. An investor's interest thus shifts to assets that offer returns above inflation...or at least a vehicle where money doesn't lose value. Gold is one of the most reliable and proven tools in this scenario.

Politicians in the US, EU, and a range of other countries are keeping interest rates low, which, in spite of a low CPI, pushes real rates below zero. This makes cash and Treasuries guaranteed losers right now. Not only are investors maintaining purchasing power with gold, they're outpacing most interest-bearing investments due to the rising price of the metal.

Here's another way to verify this trend. As the following chart shows, from January 1970 through January 1980 gold returned a total of 1,832.6%. This is much higher than inflation during that decade, which totaled 105.8%. 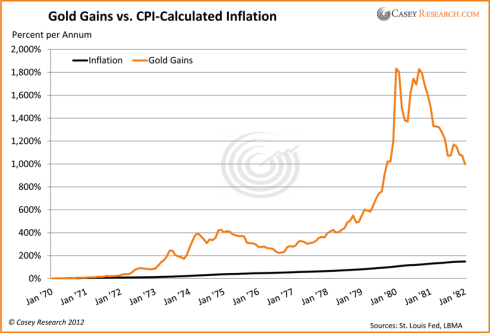 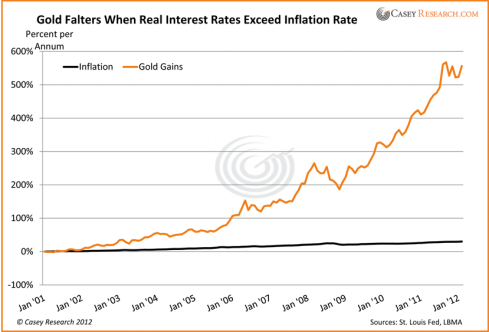 Further supporting this thesis is the fact that when real rates are positive, gold has not performed well. You can see this in the following chart of when real interest rates were higher than inflation. 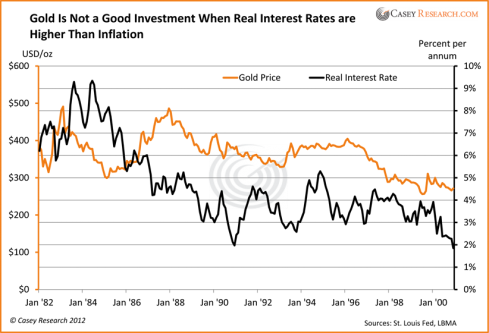 The Gold Price fluctuated between $300 and $500 for the twenty-year period when rates were positive. This is a strong reminder that bull markets don't last forever – even golden ones – and that at some point we'll need to sell to lock in a profit.

So if history demonstrates that gold does well during a negative-rate environment and poorly during positive periods, the natural question becomes...

US Federal Reserve Chairman Ben Bernanke stated in January that he expects to keep short-term interest rates close to zero "at least through late 2014." This low-rate, loose-money policy is intended to "support a stronger economic recovery and reduce unemployment." While his strategy is debatable, this implies that almost any inflation at all will continue to keep the real rate negative and thus gold will stay in a bull market.

What if the economy improves? After all, there are economic data showing the economy may be finding its footing, making some believe interest rates could be raised earlier, as soon as next year. Based on the data above, the answer to the question is, "What does inflation do?" In other words, interest-rate fluctuations alone aren't important; it's how the rate interacts with the inflation rate. If inflation simultaneously rises and keeps the real rate negative, we should expect gold to remain in a bull market.

With the obscene amount of money that's already been printed, high inflation seems almost certain at some point, even if there isn't any more money creation. This is why we think the end to the gold bull market is not yet in sight.

One more point. You'll notice in the above charts that this trend doesn't reverse on a dime. It takes anywhere from months to years for investors to shift from interest-bearing investments to metals – and vice versa. And the longer the trend, the slower the change. Real rates have been negative for a decade now, and with broad institutional investment in gold largely still in absentia, it seems reasonable to expect that the trend in gold won't shift anytime soon.

Armed with these data, there are reasonable expectations you can have going forward:

There are a lot of reasons to own gold today, and there will likely be more before it's time to say goodbye. In the meantime, we take comfort in the fact that the strongest historical indicator of all tells us the gold bull market is alive and well and has years to play out.