END_OF_DOCUMENT_TOKEN_TO_BE_REPLACED

War, inflation, rising rates and USD fail to dent gold...
GOLD INVESTING has proved resilient so far amid 2022's wider market slump, writes Adrian Ash at BullionVault.
Yes, it edged back in June from the highest level in almost a year, but while bullion prices fell they continued to hold firm for the year so far, contrasting with the first half's slump in shares, bonds, base metals and crypto.
Global stock markets lost 21.2% over the first 6 months of the year on the MSCI World Index, while Bitcoin dropped 26.2% amid soaring inflation, rising interest rates, the strongest US Dollar in two decades, and Russia's continued invasion of Ukraine.
Gold finished last month at its highest-ever mid-year prices, ending June flat from New Year's Eve in terms of the US currency at $1817 per Troy ounce and adding 8.6% in Euros and 10.9% in British Pounds at €1744 and £1493 respectively. 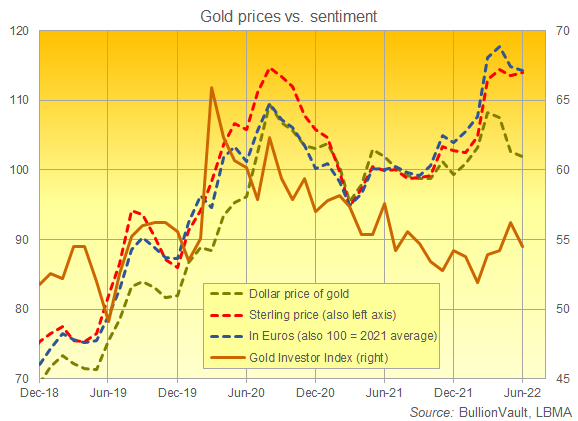 The Gold Investor Index offers a unique measure of trading behaviour among users of BullionVault – the world-leading precious metals platform online and by smartphone, it now cares for $3.6 billion (£3.0bn, €3.5bn, ¥497bn) of gold, silver, platinum and palladium for more than 100,000 private investors worldwide.
It tracks the number of people who start or add to their gold holdings across the month, and compares them with the number who sold or quit.
Last month, and with the price of gold slipping against the almighty US Dollar, the number of gold buyers on BullionVault – almost 9-in-10 of whose users live in Western Europe or North America – fell 17.0% compared to May, while the number of sellers rose by 8.6%.
Together that took the Gold Investor Index – which would read 50.0 if the number of buyers was matched exactly by the number of sellers – down to 54.5 from the 11-month high of 56.2 reached in May.
Like the gold price in Dollars, that was almost unchanged from New Year 2022, adding 0.3 points from end-December's reading.
Demand by weight was meantime very nearly matched by investor selling, with total client holdings growing by just 1 large bar of Good Delivery gold (13kg) to remain a little below 47.5 tonnes. Again, that's also unchanged from the start of the year.
Bottom line? If ever gold's appeal as a safe haven needs confirming, its resilience during this year's wider market turmoil is striking.
Physical bullion was the best-performing asset during the initial deflationary wave of the Covid Crisis, when crude oil prices sank below zero. It has now outperformed all major asset classes except crude oil as inflation jumps to 40-year highs.
Looking ahead, the rise in central-bank interest rates, although too little too late for cash savers, does present a headwind to gold prices, because the metal pays no income.
Against that, the risk of recession becoming longer-term stagflation is likely to see portfolio managers and other existing investors continue to hold tight to gold as a form of insurance, and the metal's success in 2022 so far is likely to attract fresh inflows if the slump in world stock markets continues in the second half of the year.
Attachments: