END_OF_DOCUMENT_TOKEN_TO_BE_REPLACED

Private gold investing interest sinks as price rally prompts 'rebalancing'...
GOLD INVESTING sentiment fell to a 5-year low amongst private individuals as 2014 ended, writes Adrian Ash at BullionVault.
Based solely on real investing activity on BullionVault, the largest provider of physical gold ownership online, our Gold Investor Index tracks the number of people who begin or grow their gold holdings each month against those who sell or reduce.
A reading of 50.0 would indicate a perfect balance of net sellers and buyers amongst customers of BullionVault – now used to invest in securely stored gold or silver by 54,000 people, a huge sample for consumer research, with 90% of them living in Western Europe or North America.
December 2014 saw the Gold Investor Index fall from 52.1 to just 50.5 – the sharpest drop since prices crashed 25% in spring 2013 – with the number of net sellers very nearly overtaking the number of buyers for the first time in almost 5 years.
The index, available on Bloomberg terminals as BVGDINDX, peaked at 71.7 in September 2011, and hit a series low of 48.8 in February 2010. 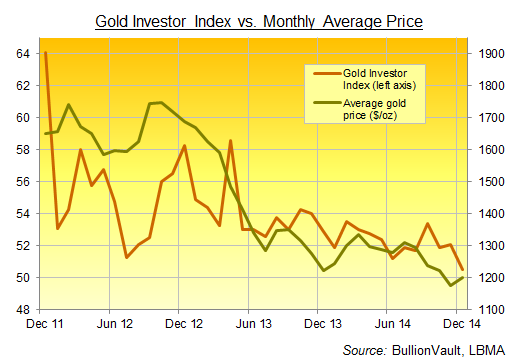 Why so weak last month? December's price rally was only the sixth time in 2014 that Dollar, Euro and Sterling gold prices all rose across the month together. It deterred new investing and prompted existing owners to take profits after buying 2014's earlier dips.
Coming at year-end, last month's price rise also gave people already investing in gold the chance to rebalance their broader portfolio, selling metal to re-invest elsewhere.
Yes, US Dollar prices were flat across 2014. But gold priced in Sterling gained 5.9% last year, while the total return from UK shares was minus 1.2%. Selling was stronger still amongst Eurozone customers. They saw gold rise 13% in 2014 as the single currency sank and interest rates paid on cash and bonds fell further.
Going "overweight" in gold may soon look smart for Eurozone investors, as the currency union risks debt default and even a break-up with the coming elections in Greece. But financial analysts and media say French and German stock markets may surge if the European Central Bank does finally begin QE this year to try and defeat deflation. If that plays out, then putting some of gold's strong 2014 gains into other assets would make sense.
Fact is however, investors cutting their gold holdings to rebalance them already owned metal. You can't cut your holdings to rebalance if you do not – and including gold in even a simple portfolio of stocks and bonds has been shown to reduce risk without significantly denting annual returns. This shows what gold has done for US investors holding the S&P 500 and US Treasury bonds (total returns, but costs and tax not included): 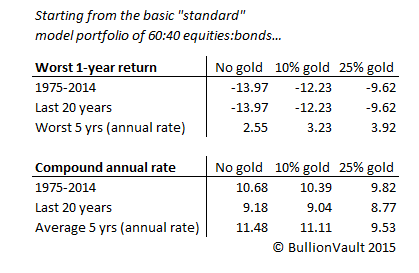 To reduce your gold holdings and rebalance into other investments after a price rise, you first need to buy. 2015 has begun with a solid move higher, but current gold prices remain 40% below the record peaks of the financial crisis in 2011-2012.
Anyone yet to start gold investing to spread risk in their portfolio might be advised not to wait.
Attachments: