END_OF_DOCUMENT_TOKEN_TO_BE_REPLACED

The outlook for gold & silver didn't improve on this New Year bounce...

WITH each passing rally in precious metals, hope has bloomed that the bear market may be over, writes Jordan Roy-Byrne at TheDailyGold.

The long and deep "forever bear" has to end but it hasn't yet. Under the surface, the bear market is getting weaker and gold is growing stronger. It's showing strength against foreign currencies and has broken its downtrend relative to equities.

These are very positive developments and a precursor to the birth of a new bull market. However, the weak rebounds in the metals coupled with the potential for a US Dollar breakout advise us to continue to remain patient and cautious.

In looking at the price action in both gold and silver I see no character change in either market. They are rallying in similar fashion to rallies of 2014 and 2015. Since gold first formed a weekly low in November 2015, it has rebounded a mere 6% in a little over two months. It hasn't even tested the 200-day moving average at $1133 per ounce or the major resistance at $1140-$1150 per ounce.

Meanwhile, silver has been even weaker as it hasn't been able to sustain any strength or rebound in the past few months. 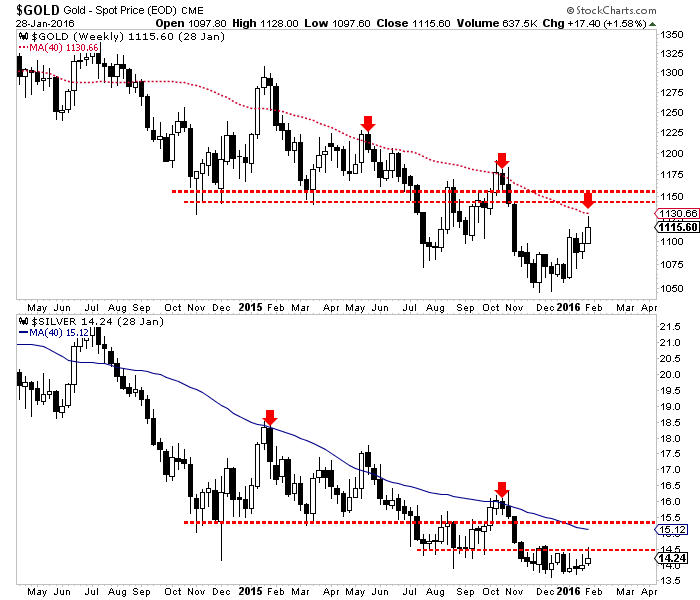 The current fledgling rebound in gold compares quite poorly to the rebounds that followed major lows in 1976 and 2008.

Gold is up only 6% since its weekly low from nine weeks ago. Nine weeks following the lows from 1976 and 2008 gold rebounded an average of 19.5%. That would put gold at $1262 per ounce. If gold bottomed late last year then at the very least it likely would have already rebounded to major resistance at $1180-$1200 per ounce.

The greenback has digested its massive gains in bullish fashion. It has held above the 38% retracement, the 200 and 400-day moving averages. It is trading nearly at the exact same level as a year ago yet the current net speculative position is at roughly half of its level of a year ago (51,700 contracts now versus 101,000 contracts in March 2015). In other words, plenty of speculation has come out of the market yet it remains less than 2% from new highs.

The strength in the gold stocks could give bulls some hope but refer back to our statement last week.

"The gold stocks, while initially following the stock market could resume their decline once metals have resumed their downtrends."

The gains this week exceeded our expectations but our statement stands. If the metals reverse course then the gold miners are likely to follow that move and not the stock market itself (which has rebounded as anticipated).

While good things are happening under the surface for gold, its lack of a strong rebound in recent months argues that such a rebound is in the future but not imminent. Gold's steady downtrend could resume in the next week or two. As a result, precious metals bulls should be ready to hedge and then wait for an extreme oversold condition amid extreme bearish sentiment before turning bullish.