END_OF_DOCUMENT_TOKEN_TO_BE_REPLACED

LADIES and Gentlemen, we have a tie! writes Arkadiusz Sieron, editor of Sunshine Profits' Gold News Monitor and Market Overview.

The current US expansion already runs to 120 months, the same as the economic boom lasting from March 1991 to March 2001.

However, this current expansion still has room to run. After all, the ongoing boom is very long, but this is because it is very weak. If the US economy is to replay the robust recovery of the 1990s in terms of GDP growth and not merely in terms of number of months, it could grow for an additional couple of years.

Now, let's compare our growth leaders in a more detailed way and draw valuable conclusions for the economic outlook and the gold market. 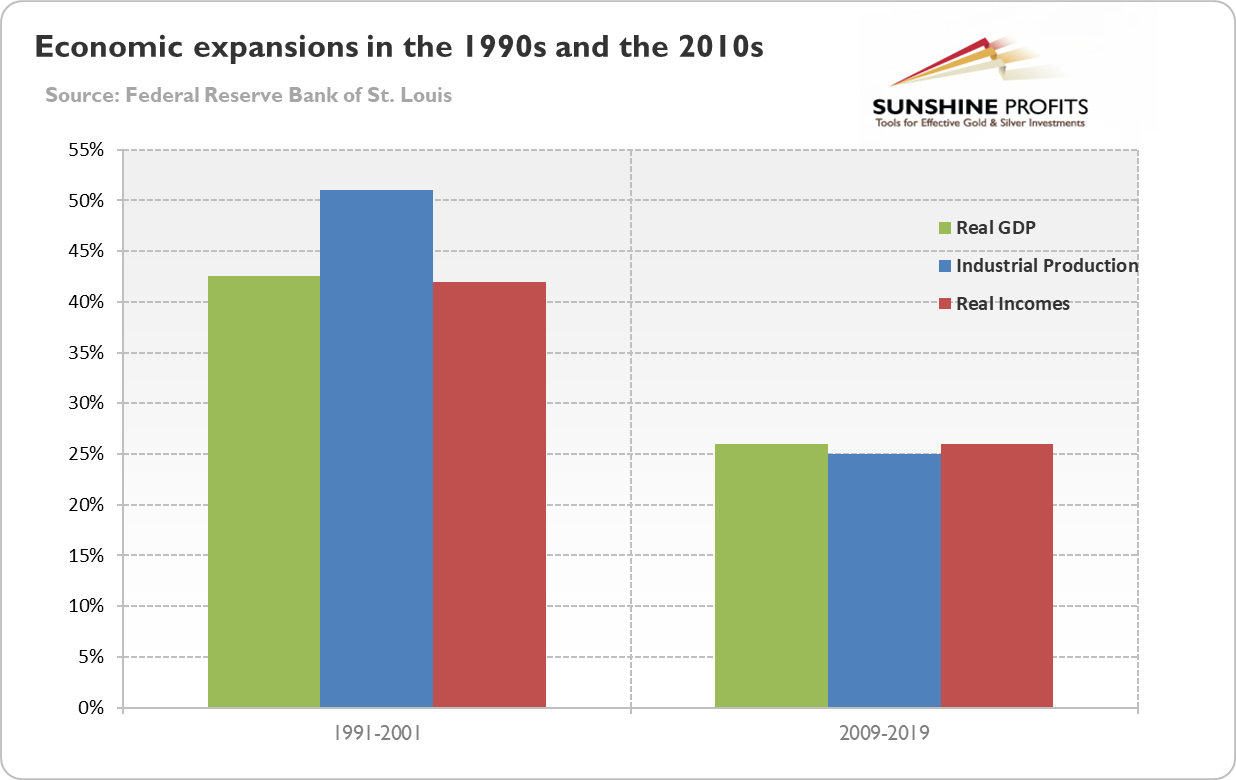 As one can see in the chart above, although both expansions lasted the same time – 120 months so far – the boom of the 1990s was much stronger.

Indeed, the real GDP and real income soared more than 40%, while industrial production surged more than 50% over the decade. In contrast, all three measures increased just about 25% in the 2010s. It means that the current expansion is much weaker. In part this is completely understandable, because as time goes by and economy advances it is harder for maintaining a fast growth rate. But still the sluggish growth is disturbing, with the exception of the gold bulls who should welcome it.

Let's move on now to discuss the US labor market. As one can see in the chart below, the unemployment rate at 3.6% is currently below the bottom of the 1990s (3.8%), although the current expansion started which higher unemployment rate than the former expansion. 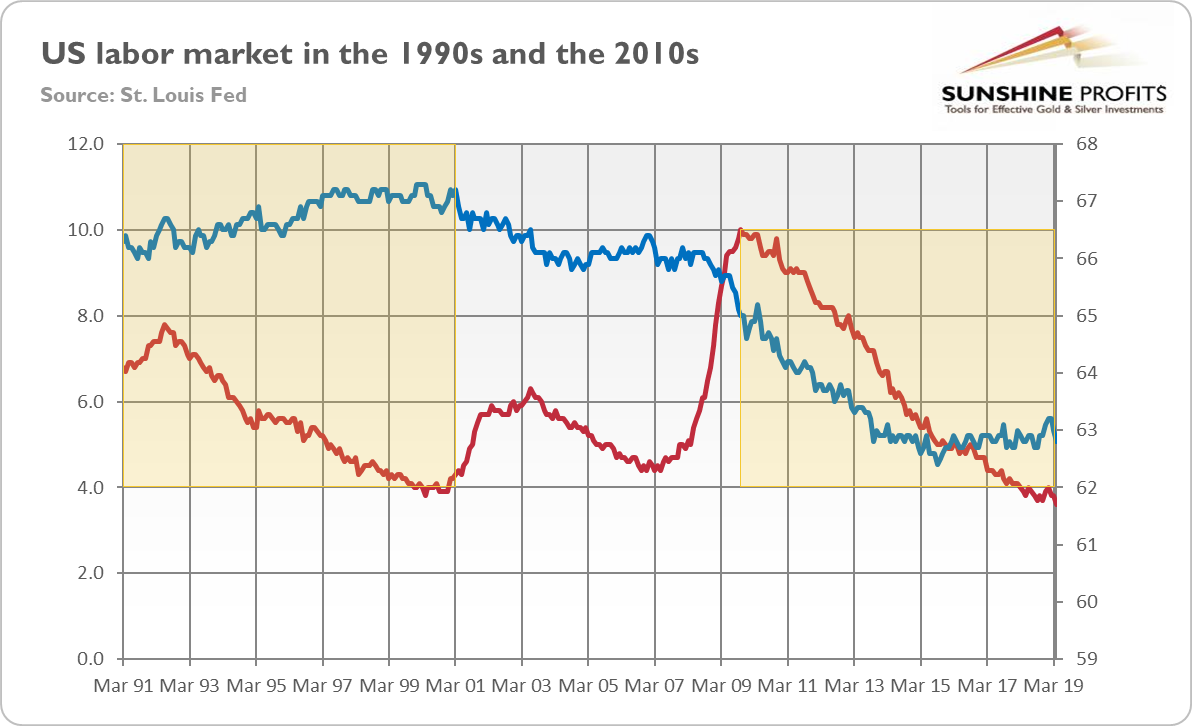 However, the labor participation rate is significantly lower than in the 1990s, as it declined from about 67 to 63%. It indicates that the labor market slack is greater than the unemployment rate suggests.

Indeed, the U-6 unemployment rate, which includes also all marginally attached workers plus total employed part time for economic reasons, is at 7.3%, a 0.5 percentage point above the through of 6.8% in October 2000. If indeed the labor market slack is greater than commonly believed (which would explain the sluggish wage growth), than economic expansion can last longer without overheating.

Let's compare now inflation in the 1990s and currently. As the chart below shows, inflation rate has been recently significantly lower – more than 1 percentage point, on average – than in the 1990s. Then, there was a disinflation, so gold struggled. Since the Great Recession, inflation rate stabilized, but at stubbornly low level. 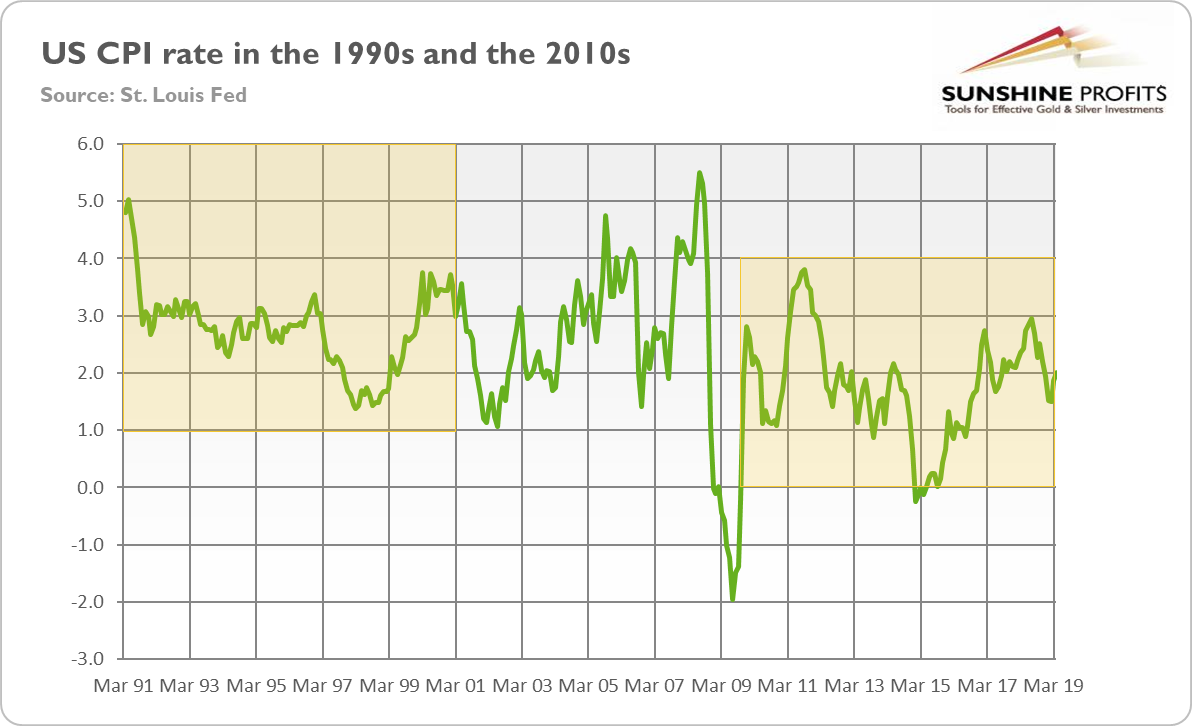 Gold, which is considered to be inflation hedge, does not like low inflation. Although low inflation also means more dovish Fed and lower nominal interest rates, it allows the Goldilocks economy to last.

Indeed, the chart below shows that the nominal long-term yields are significantly lower than in the 1990s. Similarly, the greenback's strength is weaker than 20-30 years ago. It suggests that the current expansion has still more room to run. 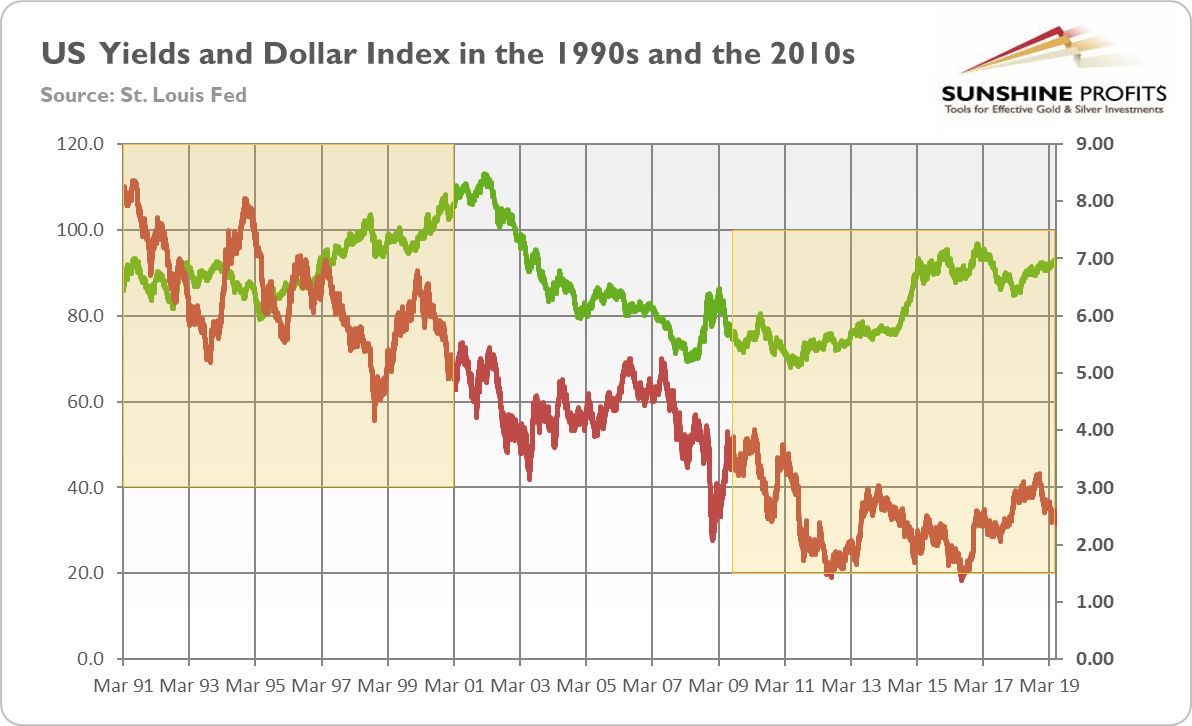 What does it all mean for the gold market?

Well, the macroeconomic environment in the 1990s was much worse for the yellow metal. The GDP was rising quickly, while the labor market was strengthening. Inflation was decreasing, while the US Dollar was strong and appreciating in the second half of the 1990s. The US fiscal policy was tightening, while the Fed was lifting the federal funds rate in 1993-95, as one can see in the chart below. 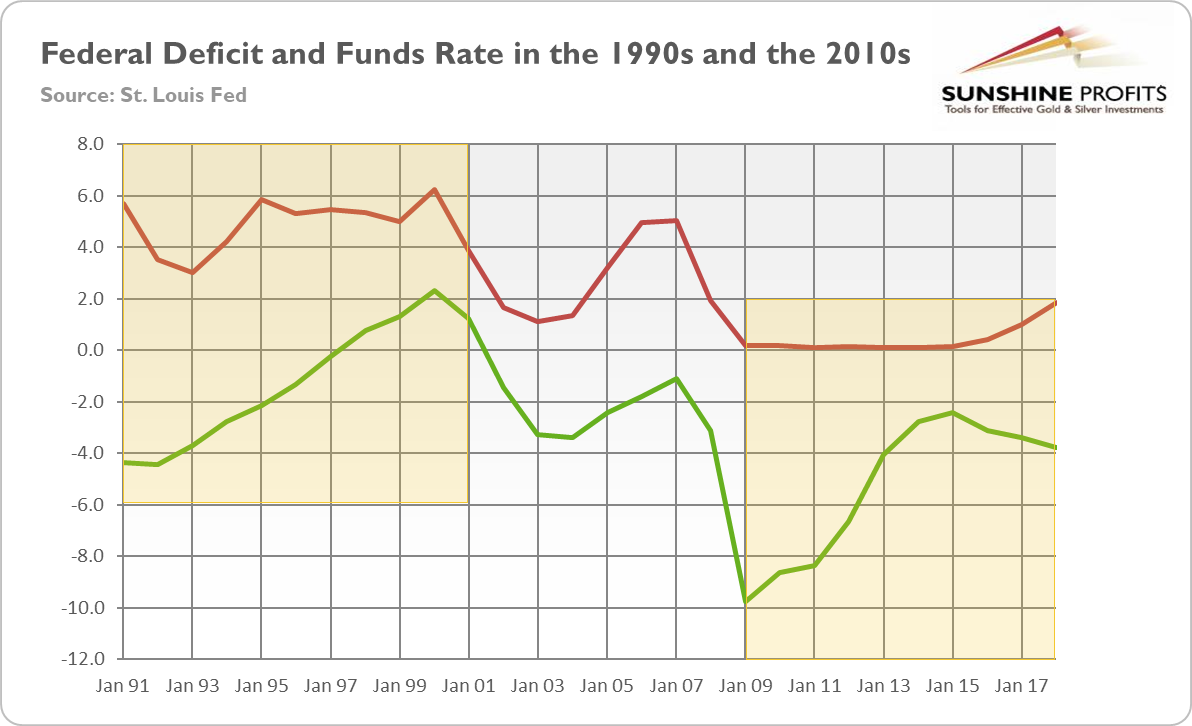 Not surprisingly, gold struggled in the 1990s. But the current expansion – despite the fact that gold has been recently in a sideways trend – has been much better for the price of the yellow metal, as the chart below clearly shows. 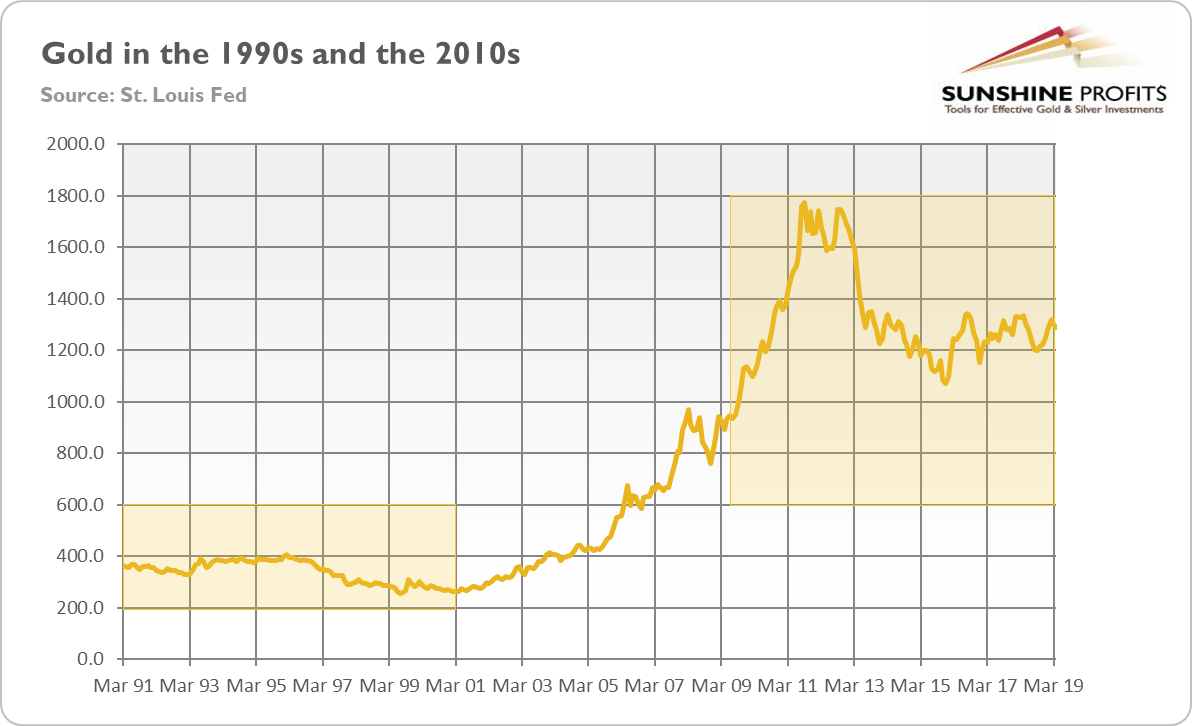 What does all this imply for the future?

First of all, our analysis confirm the view that – given the level of slack in the labor market and low inflation – the current expansion could continue for a while.

This is bad news for gold. But we have also good news.

In the 1990s, the economy grew strongly despite Clinton's fiscal surpluses and Fed's tightening in 1993-95. Now, the economy expands slowly even when supported by the Trump's fiscal deficits and the Fed's ZIRP that lasted until December 2015. It doesn't bode well for the future for the economy in the long term, but it fills the gold bulls with optimism.

After all, gold remains in the sideways trend not without a reason: the Goldilocks economy feels good right now, but it might jump out the window later.

If you enjoyed the above analysis and you're interested in detailed price analysis and price projections with targets, we invite you to sign up for our Gold & Silver Trading Alerts.