END_OF_DOCUMENT_TOKEN_TO_BE_REPLACED

'Bizarre' benchmark ritual formalized in 1919...
The LONDON GOLD FIX has many histories to tell, says Adrian Ash in Part 1 of BullionVault's view on the benchmark's centenary.
This daily benchmark, formally recorded since 12 September 1919, marks the ups and downs of unchanging, indestructible gold when priced against the world's major currencies – first the British Pound, then (and still) the US Dollar.
Besides those two, the Fixing's 21st Century successor – the LBMA Gold Price – now also presents the world's daily gold benchmark in 15 other currencies, from the Euro, Chinese Yuan and Japanese Yen to Russian Rubles, Singapore Dollars and South African Rand.
Tracking gold's daily price since 1919, the Fix of course offers a history of financial fear versus greed, showing how gold has been viewed and used by governments, central banks, investors and consumers over the last 100 years.

Ah but look what you would have made if you had invested in 1919, in sterling and just held... pic.twitter.com/j4PHKEIcDc

Bedrock of the world's monetary system for the first half-century of the Fix, gold was hoarded against evil times in the 1930s' Great Depression, again in the record peace-time inflation of the 1970s, again during the global financial crisis of 2007-2012, and now once more as savers and investors everywhere face zero and even negative returns from the 'safety' of holding cash or bonds.
As a ritual, the " prized and bizarre tradition" of the Fixings also help tell the City of London's history of "gentlemanly capitalism". Speaking today at N.M.Rothschilds' event to mark the Fixing's centenary, " Honour was essential to gold dealing and market settlement," wrote Dr.Rachel Harvey of Columbia University earlier this year. Together with "reputation...[honour was] also the basis of credit control.
"Well into the late 1970s, a majority of the bullion firms were owned by thinly-capitalised merchant banks (when compared to American, German and Japanese financial conglomerates). Trust was
placed in the firm that it would honour the obligations of its traders – even if it meant that the firm took a large loss."
It's thanks to this informality that, incredibly, from that first fixing on 12 September 1919 until the start of 1968, posterity hardly bothered to keep track. Gold was central to 20th Century history, and the fixings in London – then as now centre of the global market – marked the price at which demand and supply balanced each day. But the daily data went AWOL for modern scholars trying to look back.
"The daily price of a really important asset, when gold was central to the world's monetary system, just seemed to have gone missing," said Fergal O'Connor, now a lecturer in finance at University College Cork, after recovering those seven decades of data from old journals and trading books in late 2018.
Why? Because it hadn't been archived. "Everyone assumed someone else was doing it!" 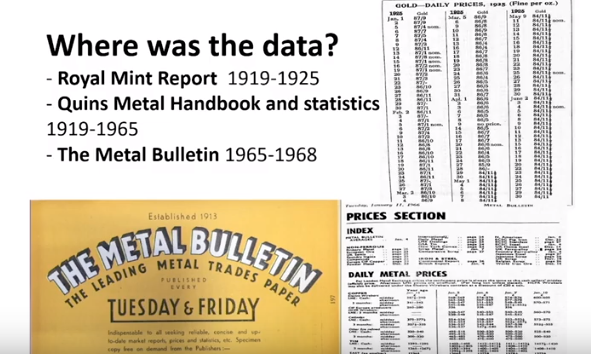 The honor-based system which let the data vanish in a fit of absent-mindedness (until Dr.O'Connor recovered it) is now a "bygone era" as Michele Blagg, currently a visiting research associate at KCL, has written in her series of biographies and interviews for the London Bullion Market Association's Alchemist magazine.
Indeed, one Gold Fix story winning attention on today's centenary is the sorry tale of a Daniel Plunkett, a Barclays' trader who – on 28 June 2012 – abused the process, placing orders in the hope of stiffing a client.
Never mind that Plunkett was caught and banned from the market, or that Barclays was fined for not stopping him in advance. So never mind either that the Fixing process itself was never at fault. Because few outside the market bothered to understand it.
Also known as a Walrasian auction, the London Gold Fixing was a rare example in financial markets of "tâtonnement" (literally "fumbling"). It used trial and error to clear the market, proposing a price, then raising or lowering it, until supply and demand were balanced.
Those orders came from across the world, gathering together buyers and sellers in a single moment of the deepest liquidity. The auction's participants undertook to accept any order larger than one 400-ounce bar. But they, like all the smaller banks and brokerages whose orders they received (alongside bids and offers from central banks, miners, refiners and other big customers), would then net off what their clients wanted and offered before responding to the chairman's proposed price.
If that price didn't bring the total market's supply and demand into balance, the chair would adjust the price, and the direct participants would relay that change back to their clients, who could then adjust their orders...and so on...until the process discovered that one single price which cleared the market.
Hence the name. The Fixing fixed the global gold market price like a ship's captain fixes its position at sea.
But never mind. Thursday, 19 March 2015 saw the last ever London Gold Fix, euthanaized at the age of 95 by Plunkett's crime, an ill-informed House of Commons committee, a groundswell of internet trolling and – of course – its very name.
Those London bankers "fixed" the gold price twice-daily. Hence today's arch talk of "smoke-filled rooms" on the Fix's 100th anniversary, because – to quote long-time outside observer James Moore in today's Independent – "no matter how hard [journalists] tried...there was no way they were going to let anyone in to actually watch a session.
"Read into that what you will."
How about commercial confidentiality for one thing? Each Fixing was a genuine market first – an actual moment of buying and selling – and a globally-recognized reference point only afterwards. Even now, with the Fixing's immediately succeeded (to ensure the world got a daily price) and its telephone calls and face-to-face meetings replaced by a web application run by benchmark specialists IBA, market participants still co-operate to find that single market-clearing price, just with a private interface taking the role of the chair.
If buyers and sellers don't meet, there wouldn't be a market. Only now, they meet digitally.
There are many more stories about the Fix – individual days like Black Monday 1987, for instance, when the process took over 2 hours to balance the gold market as equity prices worldwide sank in the worst crash of living memory. But we'll tell another story in Part 2. Because as well as tracking gold's price, the world's financial fears, and the City's switch from genteel honour to digitized regulation, the Gold Fixing also tells the story of Britain's peak and retreat from the largest empire ever known...