END_OF_DOCUMENT_TOKEN_TO_BE_REPLACED

Gold prices rose more often on Fed interest-rate hikes than on cuts last 30 years...
The FEDERAL RESERVE's first interest-rate hike after 7 years stuck at zero last December finally put gold out of its misery, writes Adrian Ash at BullionVault.
Marking a new 6-year low, gold prices hit $1046 per ounce straight after the Fed rate rise. That took the metal's loss to 45% from its record Dollar-price high of September 2011 at $1920.
Gold had first failed to reclaim that peak in 2012 when the Fed expanded its quantitative easing bond-buying program to $85 billion per month. Then gold sank in 2013 (as now ex-chairman Ben Bernanke muttered about 'tapering' QE) before steadying in 2014 (even as the taper became fact) only to slide again in 2015 (as Janet Yellen muttered time and again that her committee would, like, really really raise rates from zero before the end of last year).
The Fed squeezed its first hike into 2015, but only just! And with that phoney war of 'Will they? When?' finally ended, gold prices have barely looked back, marking 2016 with the strongest half-annual gains since the financial crisis broke in 2007.
That 27% jump came as the Fed failed to follow up with a second rate hike, never mind the two or three needed by September to keep the central bank's own 2016 forecast on track.
This is now the longest "pause" in any modern interest-rate cycle. And even if the Fed does raise at next week's meeting, it begs the question whether this qualifies as a rate-hiking cycle.
The Fed never waited so long as it did in 2009-2015 before making a change to rates. It has never now hemmed and hawed this long before following one rise with another.
Still, gold prices have softened over the summer, easing $50 per ounce from the 2-year Dollar peak of $1375 hit immediately after the UK's Brexit referendum shock. Desperate as always for a narrative of 'this plus that equals the other', financial newswires and traders put gold's retreat entirely down to Fed chit-chat – because some Fed members have switched to calling for a second rate rise sooner, rather than later, fretting about unintended consquences from today's near-record low ceiling of 0.50%.
Well, go on then Janet, Stanley, Lael and the rest. Gold dares you. 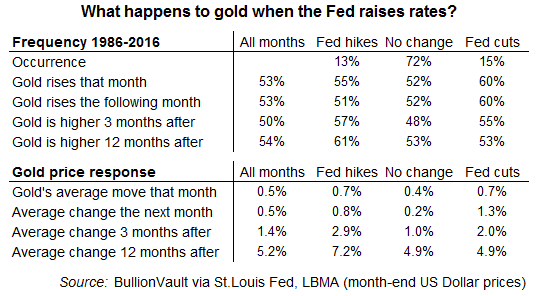 Judging from the financial news,  consensus says next week's US Fed decision on interest rates has become D-Day for this year's strong gains in the gold price.
But history says otherwise.
Gold has since 1986 been more likely to rise if rates go up than if they stay the same, and by a greater percentage as well.
Longer-term in fact, a rate rise has also been followed by much stronger gold gains than a cut, and more frequently too.
What is going on? Both short and long term, it looks to be anticipation – first of the Fed decision itself, but more deeply of inflation.

To start predicting the Fed, it's a fact that making money from financial trading means getting ahead of the move, buying before an asset goes up and selling it before it goes down.
So if gold should fall when Fed rates go up – like everyone thinks, because it pays no income and so carries an opportunity cost in the form of lost interest on cash – then no one should want to wait.
Sell early, and often. Provided you're sure you know which way the Fed will go.
Thing is, selling in advance works to depress gold prices before the Fed makes its announcement (just like buying before a rate cut pushes it higher). And brought forward in time, this self-fulfilment cracks open a gap between what intuition says gold should do when the Fed raises (or cuts) and what actually happens after the fact. 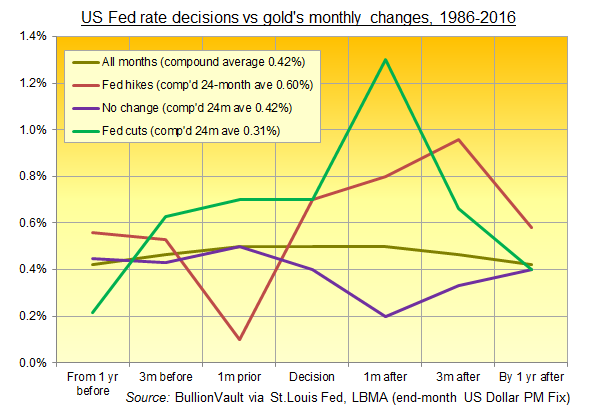 Judged against history then, the recent drop in gold prices suggests the market thinks the Fed could well decide to raise rates at the September meeting. But will that make gold fall after next week if the market's guesswork proves right?
Longer-term, notice how gold's average monthly gains 1 year either side of a rate rise are markedly stronger than the average 24-month period around a cut or a hold. This flies splat into the face of market consensus about how gold prices work when Fed rates change. Average monthly returns are twice as strong when the Fed is raising as when it cuts.
But surely gold goes down when the Fed raises, right? Not according to the data. The simplest explanation must be inflation.
Inflation in consumer prices is one half of the US Fed's official mandate (the other is jobs). And like every other central bank today, the Fed has long believed that higher rates will slow the cost of living, while lower rates will boost it.
So when the Fed raises rates, all other things equal, it's because the central bank smells inflation ahead. No surprise, but gold tends to perform better during those periods too.
Here in September 2016, that focus on inflation might risk skewing whatever trading tip you hope to find in the data above. Because inflation has, at least on the official CPI data, become almost entirely absent.
On a 5-yearly basis in fact – and excluding the 'volatile' basics which the Fed likes to ignore – it remains near its quietest since the mid-1960s, with the Consumer Price Index minus food and energy costs rising only 10% this summer from a half-decade ago. 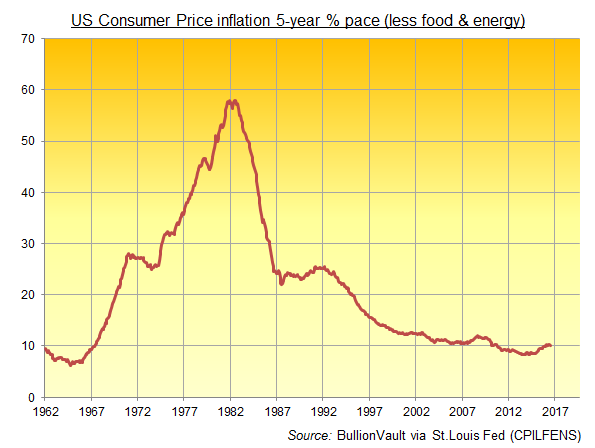 That did however mark an uptick from the new half-century lows of 5-year inflation hit in 2013. And if the US Fed is going to adjust its key interest rate ever again, without going below zero, then inflation will either have to rise or be ignored entirely to justify the change.
While the Fed has only cut rates a little more often than it raised over last 30 years, the net result is that US rates have gone from almost 8% at the start of 1986 to just 0.5% today. There isn't much lower to go.
Adjusted for inflation, that means real interest rates have dropped from 4% above the cost of living to half-a-per-cent below since 1986, bottoming at -3.5% in mid-2011 when gold prices peaked above $1900 per ounce.
So maybe gold says the Fed is in luck. Maybe, in the central bank's search for a reason to raise rates – y'know, to go with the lowest jobless rate in almost 10 years, the booming equity, debt and housing markets, and the urgent need to reload for a new series of rate cuts next time the markets go bang – gold's strong 2016 gains to date show a sniff of inflation, at least amongst professional investors and traders.
And just to say thank you, maybe a Fed rate rise is what precious metals now need to confirm that inflation is a worry on Constitution Avenue as well, matching the historical pattern in the price and rates data above.
Maybe.
Note that the data above are all nominal gold price changes, rather than adjusted for inflation. Leaving that comparison for another day, please also note that you, unlike a spreadsheet, cannot trade the historical averages...but only the very present moment and highly determined set of circumstances you find yourself in.
But note too that, with the rest of the world's central banks still pulling in the other direction...printing ever more QE cash and cutting rates below zero...we really have smashed through the looking glass.
The only certainty left standing may prove the volatility which Fed rate changes have sparked in the historic price averages. Analysis of the volatility which Fed disappointment all-too-often seems to bring will have to wait for another day as well. Next Thursday for instance, after the much-anticipated September 2016 decision.