END_OF_DOCUMENT_TOKEN_TO_BE_REPLACED

A rate-rise from zero never came, but it's hurt income and capital investing anyway...
2015 proved a tough year for anyone investing in the US or UK, writes Adrian Ash at BullionVault.
That's the headline from our new Annual Asset Performance table, now live with an interactive chart for you to review at your leisure.
What might investing in 2016 bring?
This year saw investment income stay miserably low, but capital values still got hit in the US Federal Reserve's phoney war of talking up interest-rate rises. Lift off from zero never came, at least not until today, the final FOMC meeting of 2015 in December.
Even with the Fed last forecasting a gentle rise only to 1.4% rates by end-2016, bondholders and equity investors might well wonder what the fact of a rate hike will do to the price of their assets after the mere rumour hurt them in 2015.
House prices led returns in 2015 for both UK and US assets. Pretty much everything else was flat or falling after inflation (costs and tax aren't included in our calculations), while so-called "hard assets" sank – confirming that the decade-long super-cycle in commodities really was just a turn in the cycle, even if it paid super-charged returns at the top. 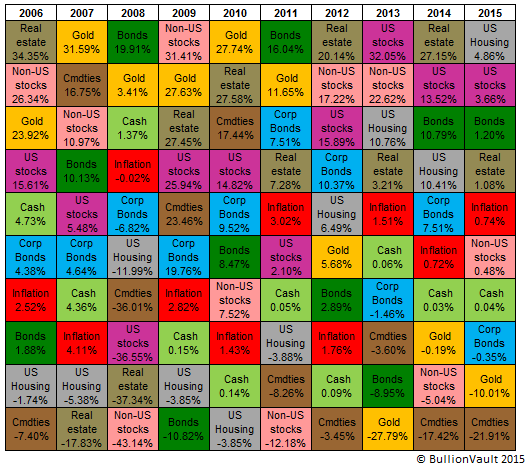 2016 may yet get tougher as the phoney war of hinting at interest-rate rises which never came leaves the Bank of England, like the US Fed, needing to put up or shut up.
If the Fed does raise Dollar rates from zero today, what will it dare to do for an encore? And with policy in the giant economies of the Eurozone and Japan still pushing in the other direction – cutting rates below zero and increasing the pace of QE money creation – what will a real shooting match do to the capital value of Treasury bonds, equities, corporate debt investment and real estate if yields rise market-wide?
Historically, gold wilts when interest rates rise, especially if annual returns to cash and government bonds rise sharply above inflation, as they did in the early 1980s.
Income investors are a long way from any solid return today, never mind strongly positive real interest rates. But gold still fell in 2015 on the chatter about rising rates, just as it fell in 2013 on the chatter about QE tapering in the US Fed's monthly money creation scheme.
Tapering didn't become fact until 2014, by when gold had already found its floor from the 2013 crash and held firm. Absent a crystal ball for 2016, some bullion-market analysts now think higher US interest rates are already priced-in as 2015 ends as well.
Either way, gold tends to do well when other assets repeatedly fail to perform, but it does best when markets lose confidence in central banks. And that's why, despite this year's drop, gold remains the best-performing asset for UK investors of the 21st century to date, and it comes second-only amongst US Dollar assets to the headline returns from commercial real estate investment trusts (REITs).
While precious metals saw little love from the market in 2015, we continued to see new buyers on BullionVault seeking both safety and value, and keen to take advantage of gold and silver's 6-year discounts.
Demand has increased notably amongst customers in the Eurozone who face central-bank QE and negative bond yields, as well as from US customers doubting the arrival and size of the Fed's long-delayed rate rise from zero.
Why buy gold? The financial crisis starting in 2007 remains the No.1 reason for owning precious metals today – named by 45% of respondents to our year-end survey of BullionVault Update readers at the start of this month as their single largest motivation.
Spreading investment risk came next with 19%, and then inflation with 10%.
Inflation went AWOL in 2015 of course, as you'll see here in the  Annual Asset Performance chart here. But like the financial crisis of a half-decade ago, the strong inflation of the 1970s showed that central bankers were not in control, destroying confidence in the markets.
2016 risks crystallizing that threat again, boosting precious metals investment demand – if not prices – should the current crunch in high-yield "junk bond" markets worsen or spread.
For both US and UK investing meantime, 2015 was already the poorest year since the crash of 2008. Financial assets in the United States returned barely 1.0%, only just ahead of the slowest inflation in half-a-century. A portfolio split equally between UK shares, bonds, cash and property investments returned just 2.6% gross of costs and inflation.
Only housing delivered a real positive gain to UK investors in 2015, rising 9.3% on our newly update Annual Asset Performance table. 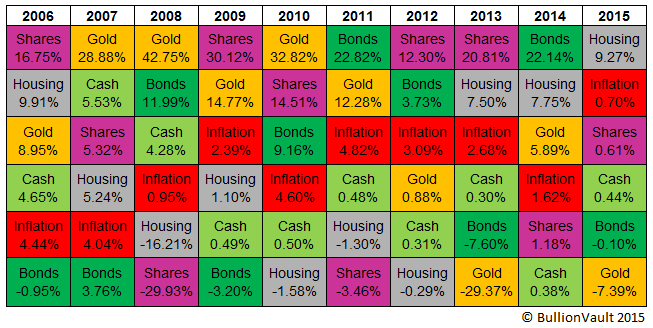 Equity dividends barely covered the stock market's capital loss. The yield paid by supposedly safe, boring government bonds failed to cover the drop in Gilt prices. Cash continued to lag inflation, now trailing the cost of living seven years in succession as short-term interest rates hold at the lowest levels in history.
Little wonder that investors everywhere have taken more risk in the search for yield, while household savings rates have halved as a percentage of income from the financial crisis peak of 2008-2012, dropping to levels unseen before the start of this century.
Consumer spending and higher-risk investing were, after all, the aim of the US Fed's zero-rate and QE policies. Desired or not, pumping up a corporate credit bubble to take over from the consumer and government bubbles of the last decade has been a clear side-effect – one which leaves all asset prices looking vulnerable to rising interest rates in 2016.