END_OF_DOCUMENT_TOKEN_TO_BE_REPLACED

What happens when a technology goes bad...

IN A MOMENT I'll examine the "liquidity pyramid" that argues for loading up on gold, writes Daily Reckoning Australia editor Dan Denning.

But between here and there, I'll amble past a recent news story, convert that story into a metaphor and then...eventually...get to my main point.

(By the way, you should be aware that the number of civilian casualties from drone strikes is almost certainly higher than reported. Under the 'signature strike' definition created by the Obama administration, any adult male in the vicinity of a known [or suspected] terrorist or militant is fair game. After all, if you're within 20 meters of a terrorist, you probably are a terrorist. Therefore your death is not recorded as a civilian casualty). 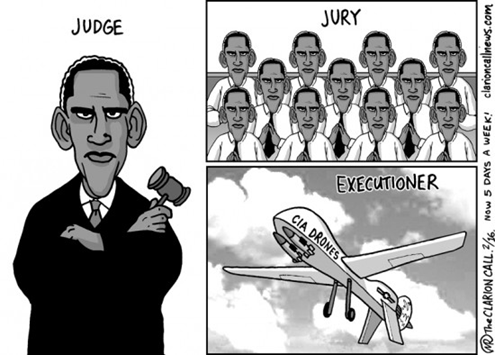 Not everyone opposes the use of drones, of course. "Terrorists" don't deserve civil liberties. But the precedents the Obama administration are now establishing will have long-term ramifications for how other nations use drones down the road. And Americans may not be too thrilled to see hostile nations utilize "American-style" drone tactics.

Using Predator drones to exterminate presumed terrorist thousands of miles away is an 'extra judicial' process, which means a handful of people are deciding whose life to end with death from above. Obama greatly expanded George Bush's use of drones since coming to office in 2008. There have been over 300 US drone strikes since 2008, with an estimated 2,500 casualties.

You don't hear much about the drone war because it enjoys bipartisan support in America. Perhaps that's because the popular narrative about drones is so deliciously high-tech and antiseptic. The narrative goes something like this: Drones fly invisibly high in the heavens, from where they conduct precise "targeted killings" of bad guys. Best of all, the drones conduct all their precise, strategically essential, kills without having to put 'boots on the ground.'

To be sure, there are plenty of principled objections to the use of drones in making war. But there is also at least one very logical practical objection: the US advantage in drone technology is only temporary, whereas the precedent of sending drones across borders to rain death on whomever you choose is permanent.

It won't be long before everyone is using drones...to kill whomever they'd like. However, it occurs to us that there's an even larger issue at stake: the ever-increasing automation and mechanization of everyday life. Drones are just one example.

What is a trading algorithm other than a kind of financial drone? High-frequency traders conduct drone strikes in the market all the time. True, no one dies when a stealth algorithm strikes the stock market. But there are plenty of collateral victims. Some investors lose money for reasons that have nothing to do with value or with long-term investing. They are simply in the wrong place at the wrong time.

And more importantly, the prices of securities are no longer determined by what thinking people decide the values are. Prices are, instead, determined by machines.

We suppose what we're worried about is the general surrender of active thought in so many spheres of life. It's like people are giving up on critical thinking. Or they are too busy staring at screens all day (computers, televisions, mobile devices) to spare any thought to tougher issues, like whether algorithms should be holding a "free market" hostage, or whether State security agencies should be using machines to kill people without any thought about unintended long-term consequences.

But then, as this article in Scientific American shows, big brains are metabolically expensive! It's not just that we don't have time to think about serious things. We probably don't have the energy for it either! The study shows that the larger brain size in humans comes at the cost of a smaller digestive system (compared to other animals). So I guess it comes down to a choice between thinking and inhaling a tube of Pringles...and thinking does not seem to be winning the choice very often.

Energy is the key to everything, isn't? Even capital is a kind of stored energy, to the extent that spending it propels resources into the real world. If the world remains in a credit depression, or enters a full-blown sovereign debt depression, "capital energy" will become even more important.

All of this brings me back to the subject of the deflationary 'prophecy' by former Fed Vice-President, John Exter. His "liquidity pyramid" both explained and predicted how money would move in the financial system during a financial crisis. He believed investors would move out of less liquid assets that were based on debt and into more liquid, real assets. You can see what it looks like below. 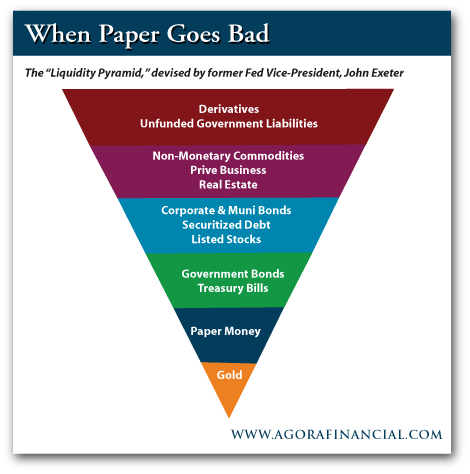 Based on the pyramid, you shouldn't be surprised to learn that Exter put all of his money into gold...back in the late 1960s. He foresaw the day when the US Dollar would no longer be exchangeable for gold. He knew US deficits would rise and the Dollar would be devalued over time.

Yet, the fact of the matter is that there is really only one documented case of outright price deflation in the US in the last 100 years. Bank failures in the 1930s led to a contraction of the money supply and falling prices. In theory, this can't happen again as long as the Federal Reserve utilizes its capacity to print an unlimited amount of money.

So was Exter wrong to assert that a deflationary crisis would be the automatic end game of currency manipulation? It's too soon to say. The main difference between now and when he first made his prediction is that the whole world now uses money not backed by gold. This change has allowed for a huge expansion in credit, and even larger bubbles in asset prices (and derivatives).

But this expansion has arguably made the inevitable bust bigger and more destructive. You could further argue that everything central banks have done since 2008 has been designed to prevent this deflationary bust and prevent the flight of capital 'down the pyramid' and into gold.

But it remains to be seen if investors can and will move from intangible assets and derivatives to more real assets as the end-game develops. It's really a proposition about how things will work. But let's assume the proposition is correct. Other than gold, are there any other 'real assets' worth investing in or owning?

I've always thought oil was just as compelling as precious metals, when it comes to real, tangible assets. There are obvious differences, though, when it comes to 'investability.' You can carry around gold and silver in your pocket. To buy oil, you either have to use the futures market or the stock market. And of course in the stock market, you're not really buying the commodity, you're buying a business that either explores for, or produces, oil or gas.

As a shareholder, you have a claim on a company's future earnings. That is not the same thing as, say, owning five kilos of silver bullion that you can also use as a door stop. Nevertheless, in the big picture, energy is just as important an input as credit or capital in an economy. That's why I'm convinced that oil and energy shares will do well, even if John Exter is right.

Time will tell, of course. But the advantage of considering these arguments now is that you can make your decisions calmly and reasonably. That's the time to make them, before you find yourself reaching for the panic button in the midst of a big sell-off.