END_OF_DOCUMENT_TOKEN_TO_BE_REPLACED

Just when the United States needs them most, are foreign bond-buyers going on strike...?

CRISIS OVER then. The Federal Reserve has worked its magic, just as expected!

US stocks are trading at the lowest price/earnings ratio in a generation; unemployment is ticking lower; household balance sheets are fast improving; confidence in the monetary and financial systems has been restored.

And the price of Gold – that long-term indicator of financial stress – has slumped, forcing wealth out of dead metal into wealth-generating lending and business at last.

Here in spring 2008, on the other hand, "the markets are giving [Ben Bernanke] credit for having turned the corner and bringing stability back," cheers Kenneth Hackel, a managing director at RBS Greenwich Capital Markets in Connecticut.

"Our view is things are in a bottoming phase," agrees a portfolio manager to the Associated Press. Why? Because the latest data – showing the slowest US economic growth since spring 2001 – "was modestly better than expected."

Better than expected sits as near to brilliant as anyone's got in the last 12 months. So it must signal good times ahead. Oh sure, not quite the good times that followed the "emergency" Fed rate-cuts of 2001 to 2003; housing can't double again you know! Nor should you expect to shoot fish in a barrel like stockholders did in the '80s and '90s, either. Last time a bull market in Gold fizzled out, the Fed funds rate was heading south from 19%, the Dollar was rising on the forex markets, and the "long boom" lay ahead – rather than behind us.

But even so, "we are closer to the end than to the beginning of this crisis," agrees Citigroup's new CEO, Vikram Pandit. And with Pandit asking shareholders to cough up a mere $3 billion on top of the $40bn already laid out by Middle Eastern and Asian wealth funds, the end of the end is getting so close, we guess he can smell it.

Not sold on the end of the end yet? Well how about "more than half way through" as Jamie Dimon, the head of J.P.Morgan, said of the banking crisis in mid-April? "Both our sales desks and client visits report a significant switch by real, long-only investors – such as pension funds and insurance companies – towards investment-grade debt securities," claims Jan Loeys of the same bank, now the proud owner of Bear Stearns...along with a $29bn guarantee of Bear's nastiest assets from the US taxpayer himself.

The CEO of Goldman Sachs, Lloyd Blankfein, also reckons "we're closer to the end than the beginning"; here in Europe, the signs are "encouraging" said Josef Ackerman on Tuesday, even as he reported Deutsche Bank's first quarterly loss in five years.

However you look at, in fact, the credit crisis will only run on for "a couple of quarters" from here, in the words of John Mack at Morgan Stanley. By Christmas, you'll barely remember it happened.

Except for all those empty houses and their weed-ridden gardens down the street. Besides all the "position wanted" notes piled onto the local store's notice board. Other than the relentless rise in the cost of living every time you go shopping. Discounting those little niggles, this crisis is finished. And they've got more to do with a wholly different problem anyway. A problem the world can get back to now the credit crisis is so clearly done.

"America relies on foreign investors who own more than half the US government debt outstanding," as Bloomberg reports, "to finance a deficit that New York-based Goldman Sachs Group Inc. predicts will expand to a record $500 billion for the year ending Sept. 30, after a $163 billion gap last year.

"Without their support," the newswire says, "long-term interest rates [on US debt] would be 0.9 percentage point higher, a 2006 Federal Reserve study found." Long-time Dollar bears will recall this is where we came in.

The historic debts built up by Washington made the US currency a long-term sell long ago. And since Bear Stearns' "enhanced leverage" funds first blew up last June – distracting the world with a crisis in investment banking – the total outstanding debt owed by Uncle Sam has ballooned by another $1 trillion.

Open the door to that other terrible twin – the $258bn trade deficit for 2008 to date – and you might wonder why the Dollar just recorded its first monthly gain vs. the Euro since New Year's Day.

Like us here at BullionVault, however, you'd be missing the point.

"It will be a great idea to stop cutting rates," says Andrew Busch, a strategist focusing on currencies for the Bank of Montreal in Chicago. "It'll help the Dollar stabilize and dampen commodity prices."

So far, all this talk about "pausing" the Fed's most aggressive rate-cutting campaign since...well...since the last one...has indeed put a floor beneath the Dollar on the currency, commodity and precious metals markets.

Indeed, the triple whammy of oil, Euro and gold-denominated doom just peaked out. 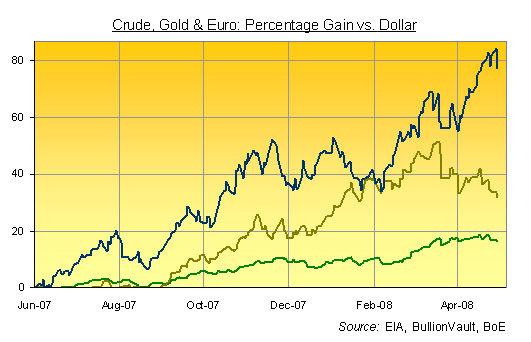 First Gold, then the Euro and now crude oil have stopped rising and fallen back – Gold most obviously losing 16.3% from its last record high above $1,032 per ounce.

So "for now, all is quiet on our investment front and the war appears to be winding down," says Bill Gross, founder and boss of Pimco, the world's biggest bond fund manager. And for an added bonus, the slump in the Dollar starting when the credit crunch began last summer means the value of America's debts has also wound down. That's cost America's foreign creditors real money as well as sleep.

Anyone dumb enough to invest in US Treasury bonds but live in Japan, for instance, now owns just ¥85 for every ¥100 they spent on T-bonds last August. And guess what? "Japan owns more Treasuries than any other nation," as Bloomberg relates.

But "after raising their holdings by $9.2 billion to $620.6 billion between March and July 2007, Japanese investors trimmed that stake by $34 billion through February, the Treasury said April 15th."

So maybe a bigger crisis is developing on Ben Bernanke's watch; maybe the much-needed foreign bond-buyer is going on strike, just when the Treasury needs him most – to pony up for tax rebates, investment bank bail-outs, and the first raft of post-Election housing aid.

"Exploding fiscal deficits, the housing correction, protectionist threats and $200 billion in tax hikes scheduled for 2011 are fueling loss of confidence in the US Dollar," as John Chapman, a research fellow at the American Enterprise Institute, notes for the Wall Street Journal. "If foreign holders of Dollars or Dollar-denominated assets sell them, all the good effects of being the de facto international reserve currency start operating in reverse. Until fiscal and monetary policies change, all this implies future inflation and higher interest rates."

Who can blame Japanese investors for doing what Chapman calls an "if" and refusing to buy greenbacks any more? The plunging Dollar literally destroys the value of Dollar-denominated debt. Sadly for the United States taxpayer, however, it only destroys it for overseas lenders. Only a surge in overseas earnings will reduce the burden of domestic debt, because the only thing America can otherwise use to repay its debts are the Dollars it earns.

Which brings us to Gold, the anti-Dollar and also the very opposite of debt.

No one's to create and no one's to default on, Gold just closed out its second losing month on the trot in April. It also recorded its sharpest drop in average daily prices since the 10% plunge of June 2006.

But given the bounce in the Dollar, only leveraged gold traders whacked by big margin calls should act surprised. And given what's driven this bounce in the greenback – an early (or false) dawn in credit, plus the bizarre notion that Ben Bernanke's done cutting rates, and wants to start defending the Dollar – it might yet prove a good chance to swap a little paper for metal.

The US twin deficits only grew bigger as the world's finance markets froze starting in June 2007. The investment imperative to hedge against their implosion did not get any smaller.

If you're looking to Buy Gold today, taking advantage of this pullback in Gold Prices but avoiding high charges and all risk of default, start here with a free gram from BullionVault now...