END_OF_DOCUMENT_TOKEN_TO_BE_REPLACED

The UNITED STATES government hasn't really done very much about its tax code since 1987 writes Nathan Lewis at New World Economics in this article first published at Forbes.

Mostly it has been like the Battle of the Somme, trench warfare accomplishing nothing, with the top income tax rate wiggling between 35% and 39.6%. During this time, dozens of governments that were actually communist in 1987 not only embraced capitalism, but actually embraced the "Flat Tax" ideas that the nobler Republicans have championed for decades; and got not only all the results promised, but far more.

Finally, now playing catch-up to Mongolia and Bulgaria with the ideas we gave them twenty years ago, the United States government is talking about reducing the corporate tax rate to 15%. I'd say: Do It. And, add the "three easy pieces" – immediate expensing and a tax holiday on repatriation – that have been suggested by Art Laffer and Stephen Moore.

In the end, these dozens of Flat-Taxing governments that radically altered their tax code, just took a big breath and did it. The results were fantastic.

I thought it would be good to start with some basics of US tax history. This isn't new, but even after all these decades, most people don't know this stuff. (Some weren't even born then.) 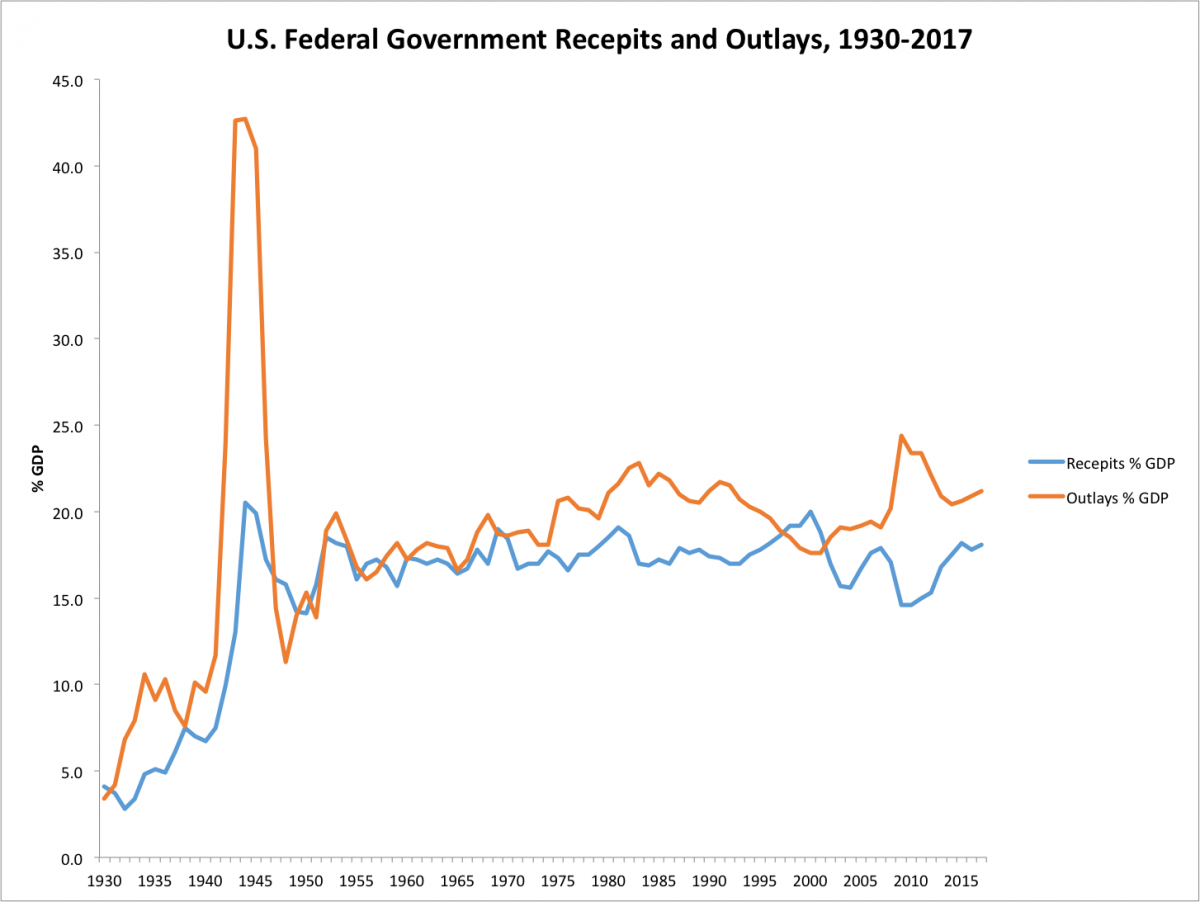 What do we see here? I'll tell you what I see: Federal Government tax revenue, as a percentage of GDP, hasn't changed much since about 1950. The variation we do see, especially the dips around 2002 and 2008, are related mostly to the economy as a whole (recessions), not changes in tax policy. We can also see that budget deficits, over the years, have had more to do with spending (as a percentage of GDP), than with tax revenue. (The figures for the last year of 2017 are projections.) 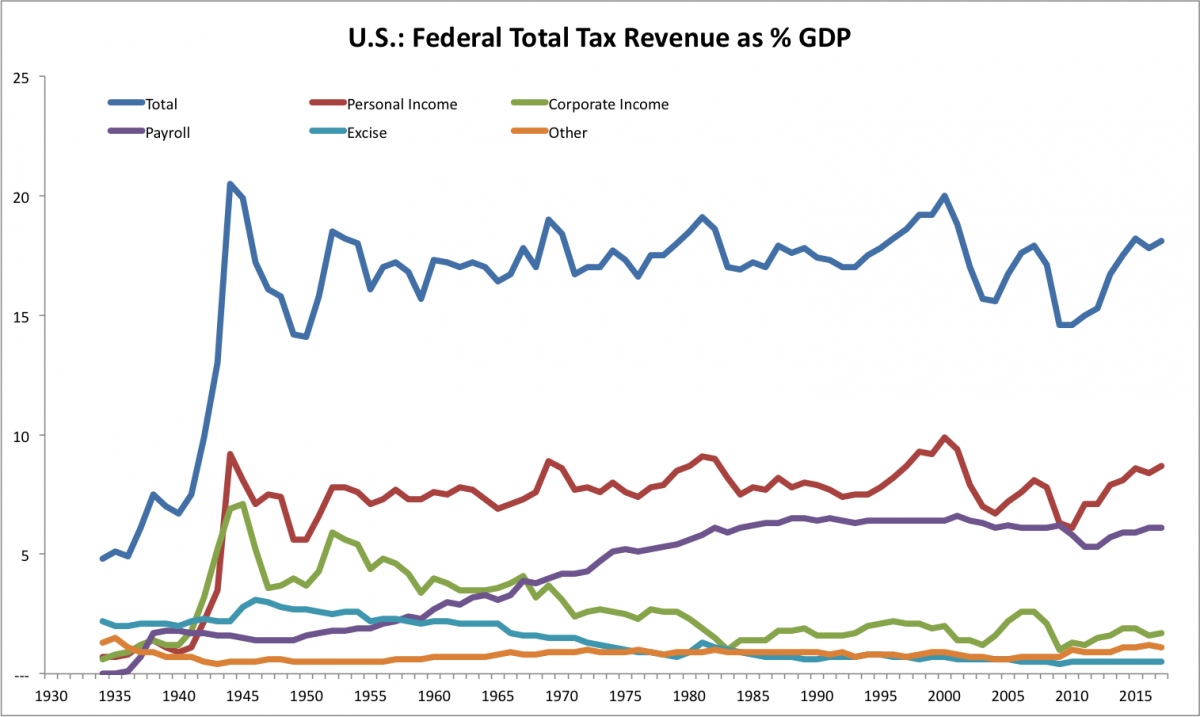 But, since corporations pay most of the payroll tax, perhaps the same principle is applying to corporations as well. Higher individual payroll taxes have been matched by a falloff in excise tax (targeted sales tax) revenue.

To argue otherwise would be to say either that taxes have no effect at all, or that an economy actually functions better with higher taxes, both of which are rather silly. Recessions, which really take a big bite out of revenue, become less likely when tax rates are lower. From this we can see that, if tax revenue/GDP is stable, and nominal GDP is higher, then the effect of lower tax rates has been more tax revenue, than would have been the case otherwise. Even after decades experiencing exactly this, it is still a controversial notion both on the Right and the Left today.

This unexpected phenomenon – the stability of tax revenue/GDP after tax rate reductions – turns up over and over again. It was true in Britain during the Thatcher tax cuts of the 1980s. It was true in Japan in the 1950s and 1960. It was true among a dozen flat-taxers since 2000.

But, it is about more than revenue. When times are hard, there is more pressure on the government to increase its spending. This can take the form of welfare and unemployment payments for the lowest in society, and also welfare/cronyism for the largest corporations. When it's hard to make an honest buck in the private market, either as an entry-level employee or a corporate CEO, then it becomes relatively more attractive to try to scam a dishonest buck out of the government, through some kind of political pressure. We can see a trend toward higher government expenditures in the difficult 1969-1982 period, and then a trend lower as the economy improved in the 1980s. The trend turned up again in the 2002 recession, and spiked higher in the 2008-2009 recession.

Thus, lower tax rates can not only create more revenue, due to a higher nominal GDP, they also allow lower expenditures, with the potential result of a shrinking budget deficit. Plus, they offer all the advantages of greater economic health – more and better jobs, more successful business creation, more investment, and more innovation. A rising nominal GDP helps brings the government debt/GDP ratio down, due to an increase in the denominator. Over a decade or two, this can be a big deal.

It really irritates some people – on the Right – that government could actually get bigger (more revenue) due to tax reform. (It irritates those on the Left that there would actually be more revenue for welfare programs with lower tax rates.) I personally would like to see a much smaller Federal government, of about 5% of GDP, refocused on the original enumerated powers of the Constitution, which is basically a military. Let the States take care of the rest, as they were originally intended to do. This would involve much, much less obtrusive taxes. Rinky-dinky tax reforms like the 15% corporate tax proposal won't do it.

There will be enormities of "expert analysis" pouring forth, about the supposed ten-year budget consequences of this or that tiny tweak, and who benefits and who does not, and "fairness" and so forth, nearly all of which will be wrong or irrelevant. It is easy to get bogged down in this and do nothing – just as the US has done nearly nothing in the past several decades. Here's my analysis: 1) Tax revenue/GDP would stay about the same, with a 15% corporate tax rate; 2) Nominal GDP would be higher than would be the case if nothing was done; 3) The healthier economy would allow Congress' deficit hawks to get the upper hand, and bring down overall spending, from what it would be otherwise.

Pie-in-the-sky fantasy? Look at the last eighty years of history, and tell me I'm wrong. That is why I say the more successful Flat-Taxing governments "Just Do It." Their "expert analysis" was the same as ours; but, they ignored it. They could see that it would be a big improvement, so what more is there to talk about? Donald Trump has this big picture vision: it is obviously the right thing to do, so you do it.