END_OF_DOCUMENT_TOKEN_TO_BE_REPLACED

How to fix the fundamentalists...?

WE LEARN of the pending birth of a new organization, American Compass by title, writes Brian Maher at The Daily Reckoning.

Just so. Yet we were unaware that American conservatism was down with the disorder.

It might suffer a slight wheeze, a sniffle, a light cough, perhaps a rare gag – but no chronic or debilitating symptoms.

These fellows may argue that a 39% rate represents a dangerous flirtation with socialism, a menace to American liberty and civilization.

But a 36% top marginal tax rate is nearly freedom itself.

Government spending may safely consume 20% of the gross domestic product, they allow. But should it exceed 23%...poor Adam Smith would do 100,000 revolutions in his grave.

We exaggerate for effect, perhaps. But we believe the central case is sound...

We believe most conservative anti-government enterprise aspires to "clean up the whorehouse," while "keeping the business intact"...in libertarian Frank Chodorov's unimprovable words.

Consider one example exquisitely in point.

The late Butler Shaffer was a retired professor of law at Southwestern University.

Here he recalls the 1964 Republican National Convention – where a modern Patrick Henry, Barry Goldwater, thundered in defense of liberty. But in reality?

"I sat in the Cow Palace in San Francisco as part of my state's delegation to the Republican National Convention (ie, the Goldwater Convention)...Afterward, I was enjoying a drink at the top of the Mark Hopkins Hotel with one of Goldwater's advisers. I asked: 'Now that Goldwater has the nomination, let us suppose that he gets elected President. What do you think he would do to begin cutting back on federal government power?'

"'What do you mean?' my acquaintance answered. I reminded him of Goldwater's book The Conscience of a Conservative, wherein he proposed eliminating a few government programs (federal involvement in education being one area).

"The other man answered: 'Don't be absurd: If Goldwater gets elected President, the most we would hope to accomplish would be to slow down the rate of growth of government.'

That is, to tidy up the cathouse...while "keeping the business intact".

And that was under the firebrand Goldwater. What could you possibly expect of feebler conservatives?

The business has remained intact ever since. Indeed, it has expanded to dimensions truly pornographic.

Market fundamentalism holds a disdainful view of government deficits. Yet...

And was it not a Republican who shook off deficits entirely?

They do not matter, said he.

Did not the Republican-held Senate vote to uphold the Patient Protection and Affordable Care Act – Obamacare – when presented the opportunity to scotch it?

As we recall, it did.

These fine people may be the soul of compassion.

And the mandate itself may be more humane than humanity itself. It may even count as the "right thing to do."

Yet market fundamentalism it is not. It wars against the most elemental concept of insurance.

As well demand fire insurance once the house has burned to the earth, or life insurance when the body is in the morgue.

The Obamacare mandate to purchase health insurance has a close relative, a kissing cousin, in an earlier proposal by the conservative Heritage Foundation.

Yet Mr.Cass is somewhat ruffled that all conservative "thinks tanks" labor incessantly to:

Please understand – this fellow has no heat against any of these. To the contrary!

"Without question," he affirms, "those principles are vital."

But he insists they are unequal to the times in which we live. He argues these times instead require a "conservative economics."

"Conservative economics will take seriously the effects of social and market forces on each other. It will concern itself with the pernicious effects that high levels of economic inequality can have on the social fabric, the market's functioning and people's well-being, regardless of absolute material living standards...

"Conservative economics will also accord equal respect to the concerns of capital and labor, rather than claiming that whatever is best for shareholders in the short run will eventually prove best for workers as well. It will favor collective worker representation that affords real influence in setting the terms and conditions of employment over the fiction that individual employees enjoy the freedom to each negotiate their own terms. It will be aware that cheerfully abandoning the world's industrial supply chains to Asia was, is and always will be irresponsible."

Many details of this conservative economics remain dim, to us at least.

In four additional words, more of the same.

That is, it will not leave you to tend your own affairs.

This Cass fellow means the best in the world, we are convinced of it.

But if he is so hot about "the pernicious effects that high levels of economic inequality can have on the social fabric, the market's functioning and people's well-being, regardless of absolute material living standards"...

Why not have a go at the Federal Reserve? Why not put the thing on trial?

Its war on interest rates has vastly prospered the asset-owning classes – the rich. It has worked very little benefit for Americans residing on what is called Main Street.

"Unconventional monetary policy" of course refers to quantitative easing, zero interest rates, negative interest rates and the devil and the rest of the tools in the central banker's deepening kit.

Deutsche Bank examined their impact on several metrics of economic performance around the world.

The telling results, as summarized by analyst Daniel Lacalle:

In 11 of 12 instances, "unconventional monetary policy" proved either negative or insignificant.

And eight of the 12 proved outright negatives.

We enter the following graphic into the record as evidence of central bank futility: 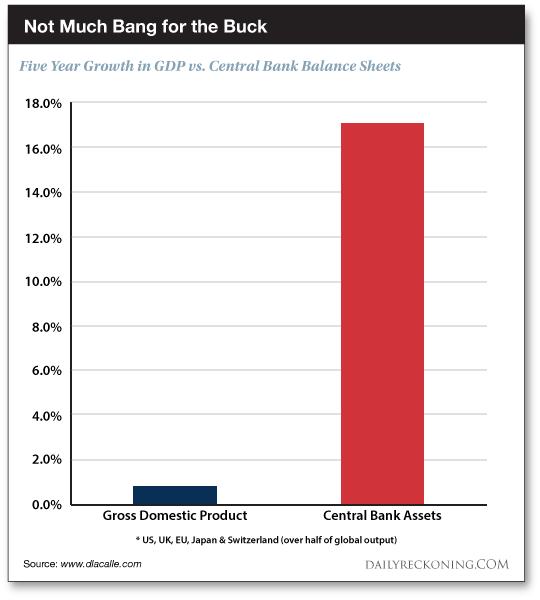 What about "cheerfully abandoning the world's industrial supply chains to Asia"?

Well, Mr.Cass, we suggest you broaden your inquiry.

But you can blame the United States Dollar as much as traitorous corporations...

In the mid-1970s, Richard Nixon scissored the Dollar's final tether to gold.

The gold standard, a poor imitation in its dying days, nonetheless kept the balance of trade in a range.

The ersatz Dollar removed all checks.

America no longer had to produce in exchange for goods...or fear for its gold.

The international division of labor was opened to hundreds of millions, particularly peasants from the labor-rich fields of China.

What does "conservative economics" have to say about all this?

It is far easier to dragoon the American people with this law, to club them on the head with that law, to shove them this way or that way.

Which is – incidentally – precisely what any "progressive economics" would promise.

We prefer economics instead – that is, economics without adjectives.

Or if you must have one...sound economics.

But that would require, in our telling, cleaning out the Federal Reserve as it presently exists.

That is, cleaning out the whorehouse itself.

And both sides are determined to keep that business intact...