END_OF_DOCUMENT_TOKEN_TO_BE_REPLACED

Gold leasing helps China's banks fill import quotas as retail demand sinks...
CHINA's GOLD imports are being boosted by banking deals to lease bullion and raise loans, according to a new analysis, masking 2016's hard fall in household gold demand from official trade data.
Gold-leasing deals offering cheaper finance costs than China's central-bank interest rate, says Tom Kendall, head of precious metals strategy for Chinese-owned ICBC Standard Bank in London.
"Now, more than anywhere else, gold is widely used in China as a means of raising short-term liquidity" both by state-owned enterprises and also smaller-and-medium sized private firms.
China's gold market is "highly evolved", Kendall explains in the latest quarterly Alchemist magazine for trade body the London Bullion Market Association (LBMA), more sophisticated and less focused on physical demand and supply than many outside observers believe.
With China's private demand and physical imports joining its gold-mining output as the world's No.1 in 2015, "Jewellery and retail investment demand for bullion is clearly a large component of the Chinese market," he says, "but...in reality a multitude of financial forces are at work."
Already by 2014, two-thirds of daily transactions on the Shanghai Gold Exchange were "investment trading, or rather, derivatives trading," said then-SGE chairman Xu Luode at an LBMA conference in Singapore.
"In my opinion, the desired ratio should be something like 20% [physical] / 80% [derivatives] or 10%/90%," said Luode – formerly a senior official at Beijing's central bank, and now executive vice-president at Bank of China (SHA:601988).
Here in 2016, writes Kendall, Chinese corporations outside the bullion industry are using gold leases "as a financing vehicle...a mechanism" for exploiting the gap between different interest rates.
Kendall gives the example of Chinalco ( SHA:601600), the state-owned aluminum giant, which in June borrowed 10 tonnes of gold bullion from China's Bank of Communications (SHA: 601328, also known as BOCOM).
Selling that metal through the futures market, Chinalco said it would raise CNY 3 billion (almost half-a-billion US Dollars) of finance, with a 'hedging' contract then protecting it from any rise in the gold price by the time it needs to return 10 tonnes to BOCOM – like ICBC Standard and Bank of China, a full member of both the Shanghai Gold Exchange and the LBMA.
The annual fees on this 12-month deal – including the cost of leasing, trading the futures contracts, and also the price hedging – "shall not in aggregate exceed the benchmark interest rate for one-year loan set by the People's Bank of China," said Chinalco's statement to the stock market.
With price-protected gold-financing deals cheaper than cash borrowing costs, this growth in China's gold leasing market is enabling Chinese banks to "fulfil their import quotas" says Kendall at ICBC Standard – pointing to the government-set limits which would otherwise be reduced for future shipments if only part-met – "at a time when physical demand from the jewellery sector has slackened." 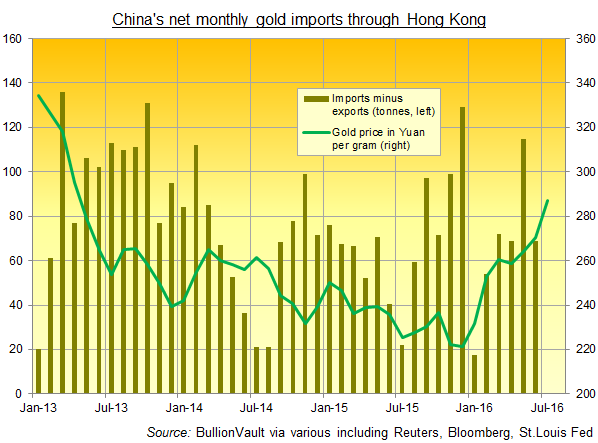 "We think that trade data is somewhat overstating underlying demand," agrees a note from Swiss investment and bullion bank UBS, pointing to "double-digit percentage declines" in estimates of China's consumer gold demand.
"There is still no sign of the [jewelry] sector bottoming," said analysts Thomson Reuters GFMS in their April-to-June update published last week, with China's jewelry demand – usually accounting for 60% of the country's world-leading consumer purchases – marking its weakest quarter since 2009, down by almost one quarter from Q2 last year.
China's slowing GDP growth doesn't fully explain this fall, says independent consultancy Metals Focus, because "Chinese retail sales (of all consumer goods) have achieved double digit gains in recent years [and] also during 2016-to date" while household gold demand has dropped by 20%.
This isn't the first time that China's finance sector has boosted gold bullion imports, using them to exploit the gap between different interest rates and prices rather than selling that metal to meet private demand.
Coming after 2013's price-driven surge in household gold buying, early 2014 saw a further jump in China's imports as bullion was "used for short-term financing," said Beijing analyst Liu Xu at Capital Futures at the time, noting that "tight money conditions [were] fueling such deals."
By March 2014, analysts quoted by the Financial Times in March 2014 estimated that one-third of all China's copper imports were for collateral in complex financing deals, while US investment bank Goldman Sachs said gold could account for 30% of all such activity, perhaps totalling $250 billion from 5 years before.
New regulations in June 2014 then sought to curb this boom in 'trade commodity financing', raising both the cost to banks of issuing short-term letters of credit and also the size of deposits required from customers wanting foreign currency.
"Increased costs and higher [foreign exchange] volatility has made hedging currency risk more expensive" again, says Kendall, while metal borrowing by jewelry manufacturers has also fallen on the sharp decline in retail gold sales.
Within China's domestic finance sector however, 2016's tighter credit conditions, plus falling profit margins for corporations and that lower consumer demand for gold jewelry, have combined to make gold leasing for non-gold businesses attractive to both lenders and borrowers, says Kendall's article for the LBMA, What Has Aluminium Got To Do With Gold?
"In effect, what the slowing Chinese economy has taken from the gold lease market with one hand, it has started to give back with the other."