END_OF_DOCUMENT_TOKEN_TO_BE_REPLACED

The role of gold in central bank reserves...

SINCE 2009 the signatory central banks of the Central Bank Gold Agreement have stopped selling their gold, writes Julian Phillips at GoldForecaster.com.

We have stated many times in the past that the entire exercise of selling gold by these European central banks was to support the birth and establishment of the Euro. They felt this was achieved by 2009, 10 years after the launch of the Euro.

In the same year we saw the arrival of emerging nation's central banks into the gold market as buyers. Since then they have set a pattern of Buying Gold that continues as a driving force behind the Gold Price even today. In this article we look at these events and other monetary developments in the gold market to see what to expect in the days and months ahead.

It is the emerging nations' central banks, whose reserves have been growing strongly that have led the way in Buying Gold for their reserves. Their aim is to diversify away from the US Dollar and other leading world currencies and to Buy Gold as a counter weight to those currencies.

These central banks tend to be in Asia, the Middle Eastand South America. They include:

The underlying reason why all of them are buying and why the European signatories to the Central Bank Gold Agreement stopped selling is because they all consider gold to be an important reserve asset and as the head of the Bundesbank put it, "gold is a counter to the swings of the Dollar".

Neatly put, but isn't there more to this than simply countering the swings of the Dollar. Since gold was at $300 an ounce in 1979 right through to 2005 gold has been at that level or higher. Gold has risen in all currencies including the Euro which was well below €300 to an ounce of gold and is now more than four times higher than then. It has risen from $35 an ounce since the 1960s, a rise of 47 times!

Clearly, gold adds further ingredients to national reserves as these numbers demonstrate in part.  The emerging world is as aware of gold's value in their reserves as are the developed world's central banks and are doing something about it before there are potentially devastating developments in the global monetary system.

Having stated that they were sellers of gold from 1999 onwards through until now, Europe's signatory central banks to the CBGA gave the impression before 1999 that their gold holding weighed heavily above the gold market. This combined with accelerated mining of gold then as the price was dropping, forced the Gold Price down and pushed the developed world to more and more dependence of the Dollar then the Euro. But in reality central banks were not trying to get rid of their gold holdings. Some aimed at selling 20% of their reserves in total, while others, like Germany, did not sell any of their gold, despite being signatories to the agreement.  Some like the UK and Switzerland appeared to gullibly sell half of their reserves.

Then in 2009 all the signatories stopped selling except for small amounts for the minting of gold coins. This left the holding of European banks at these levels: 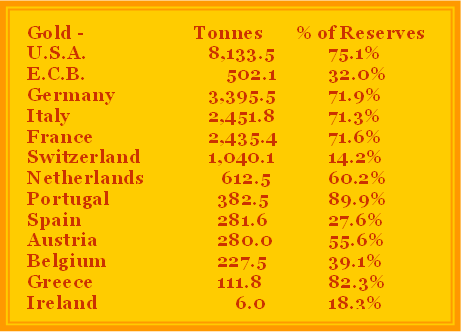 For such an archaic reserve asset, it is doing very well in terms of its price moves. But the governments of the developed world know that if their 40-year long experiment with un-backed paper money were to go wrong then gold could come to their rescue and, my goodness, it has!

The now incumbent money managers may well feel surprised at the way we have described currencies as an experiment, but since Nixon cut the link of gold to currencies back in 1971 that's what we've had.

Now, the money experts and leaders of the world, looking at the way governments across the developed world have abused this paper money and particularly national debt levels, they too can see the sinking level of confidence in such money both inside and outside the developed world. What can pull them from the brink of disaster if confidence in the two leading developed world currencies – and leading reserve currencies – collapses? What can pull the world's leading commercial banks, particularly those fused at the hip to government, from collapse?

Having watched the credit crunch morph into the Eurozone debt crisis and potentially return across the Atlantic by year's end to see the US once again fighting over-indebtedness, developed world central and commercial banks realize that whatever their dislike of the discipline of gold and its unmanageability, it will allow them to harness a confidence that currencies are failing to do. Gold is also facilitating loans and liquidity that goes far beyond its price.

Building your own gold reserve? Buy Gold at the lowest possible price by using BullionVault...